What percentage of white people owned black slaves in the US?

I recently read a French post on Facebook saying that only 3% of white people owned slaves of African descent in the United States.

Here is a part of a debate in French quoting a twitter post about the initial claim. 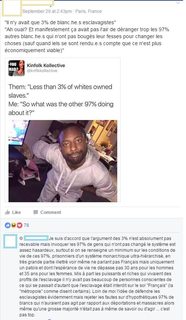 At the peak of black slavery in the South, only 6 percent of Southern whites owned slaves. If you include the white people in the North, it means that only 1.4 percent of white Americans owned black slaves at the HEIGHT of slavery.

One-quarter of all free families in the South (note, this category includes black free families) owned slaves, according to the 1860 U.S. Census. [...] In the Lower South (seceded before Fort Sumter), 36.7 percent of white families owned slaves. In the Upper South (seceded after Fort Sumter), the proportion was 25.3 percent. In the Confederate states as a whole, it was 30.8 percent. In the border states (which did not secede), the percentage of slave ownership was 15.9 percent. *

What percentage of white people owned black slaves in the US?

There is surprisingly little information about this available. The information that does exist is almost entirely based on different interpretations of the 1860 census (except of course for the claims that do not name any sources).

This seems to be the more relevant claim from Goad:

At the peak of black slavery in the South, only 6 percent of Southern whites owned slaves. If you include the white people in the North, it means that only 1.4 percent of white Americans owned black slaves at the HEIGHT of slavery.

Goad doesn't name any sources, and I was unable to find any for this claim. A more common claim is 1.6%, see for example this meme, which claims to be based on the 1860 census. The only way to get that number from the census data is to calculate the relation between slave-owning households and total population (including slaves), which doesn't make a lot of sense.

You can view an interpretation of the 1860 census data at civil-war.net which notes that 8% of US families owned slaves (note that this already includes the north as well as the south). You can retrieve the original census data yourself, but it's not very readable. You can also access the census data digitally at the University of Virginia.

There are a couple of problems with the 8% number, for example that it includes the northern states which didn't actually own any slaves at that point, or that it includes black slave-owners.

The most notable interpretation that I could find, and likely the closest to an answer to your question, is from Armstead L. Robinson - a history professor at the University of Virginia - in Bitter Fruits of Bondage: The Demise of Slavery and the Collapse of the Confederacy, 1861-1865:

[...] while slaves made up 40 percent of the total population of the South, only 25 percent of free families, most of them white, owned any slaves at all

A different interpretation by slate.com states:

According to the 1860 census, taken just before the Civil War, more than 32 percent of white families in the soon-to-be Confederate states owned slaves

In the 1856 abolitionist speech before the House of Representatives Modern "democracy", the Ally of Slavery by Mason Weare Tappan it is stated that there are 347,525 slave holders in the United States, out of 6,222,318 white people in the 15 slave-holding states plus DC.

Specific numbers are given for each state and DC.

It is stated following the data table:

From this it will be seen that there is not a slaveholding state in the Union in which the slaveholders constitute one-tenth part of the aggregate free white population, and in some of them not one thirtieth part.

It is also explained that the census figure "347,525" includes people who hire slaves, without actually owning the slaves.

The 1850 census was the first census that attempted to specifically list every slave, and for each slave listed a slave holder was to be listed. Data from the 1850 census are tabulated in the 1854 US government publication Statistical view of the United States, compendium of the seventh census

However, the instructions of the 1850 census were:

The person in whose family, or on whose plantation, the slave is found to be employed is to be considered the owner—the principal object being to get the number of slaves, and not that of masters or owners.

So because only one holder is listed for a given slave, and because slaves usually served a family a whole rather than just the technical owner(s), some people try to attribute a slave to a family as a whole. The problem with this strategy is the census definition of "family" used at the time:

all the inmates of a boarding house or a hotel will constitute but a single family, though there may be among them many husbands with wives and children. Under whatever circumstances, and in whatever numbers, people live together under one roof, and are provided for at a common table, there is a family in the meaning of the law.

This extended to whole military garrisons, jails, asylums etc., each being considered a single "family".

For this reason, use of the census data number of families overestimates the percent of families that owned slaves.

Not the answer you're looking for? Browse other questions tagged united-states history slavery .

30
Did the Irish Catholic church have slaves in Ireland as recently as 1996?
25
Did Jews own most of the plantations that deployed slaves in the United States?
17
Did Ehrlichman claim the reason for the Nixon drug war was to criminalize black people and hippies?
46
Were George Washington's teeth ripped from the mouths of living slaves?
39
Were many former American slaves put back into virtual slavery after the civil war?
21
Were more whites slaves brought to North Africa than black slaves were brought to the United States?
9
Were slaves involved in the building of the Pyramids of Giza?
8
Were 80 million black slaves killed in the USA by the end of the civil war?