Is there an alignment between Giza pyramid complex and Orion's Belt?

The following pictures which are circulating online: 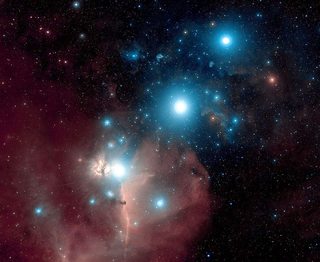 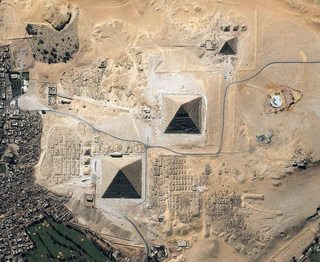 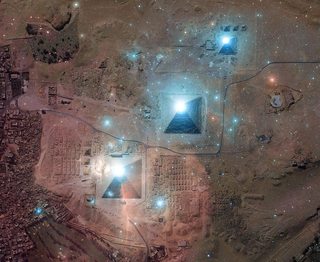 There is no original source of these images which I could found, but you can try reverse image lookup to find the copies of it.

Are these pictures genuinely correct in terms of the visible correlation? Is the Giza pyramid complex aligned with Orion's Belt?

As for the fact that the have aligned the 3 stars with the pyramids, that is just a matter of turning the photo the right way. The actual Orion's Belt in the sky will turn as the night progresses (like all stars it goes around the Pole Star once every 24 hours). As the seasons change it will also move up and down in the sky. All this means that the display in the sky bears no relation to the pyramids alignment: it varies from minute to minute.

In summary, there is no evidence that this supposed alignment is in any way special. It's simply a matter of aligning 2 photos in the right way.

I might add that there is also some evidence that the Great Pyramid was aligned with the celestial north pole. However, the Pole Star was not in that position when the pyramid was built, because the earth's rotation axis sweeps around in a circle over 26,000 years. This is called the "precession of the equinoxes", and 4500 years (the age of the pyramids) is an appreciable fraction of 26,000.

The Egyptian god Osiris was associated with annual cycles, such as the flooding of the Nile and the movement of stars. This in turn was linked to the Orion constellation, and the Dog Star (Sirius). As a result, it is conceivable that they intended the alignment of the pyramids to reflect Orion's Belt. By similar reasoning, the Seven Sisters (the Pleiades) are very important in Australian Aboriginal Dreamtime stories. In both cases the only implied significance is that people of ancient cultures were interested in the sky, and wove it into their myths.

62
Claimed similarities between Jesus Christ and Horus and other Gods
6
Was there a deep US involvement with Saddam, Osama and Gaddafi?
37
Were there only two cars in Ohio in 1895, and they managed to crash into each other?
15
Did Benjamin Franklin almost cause a war between England and France over a hoax letter to a London newspaper?
10
Did India's population decrease “by 80 million between 1000 and 1525” CE?
7
Was there a co-regency of Tiberius and Augustus?
7
Was there a “samurai duel” between a Montenegrin and a Japanese warrior?
20
Were there no “white” people in Virginia between 1619 and 1679?
44
Was there a trial by combat between a man and a dog in medieval France?
12
Is the Eye of Horus symbol based on the human brain?