I recently came across a video on YouTube claiming to present evidence that Hillary Clinton faked a rally in Greensboro, North Carolina on 9/15/2016. The video presents two major pieces of evidence:

On closer examination of the original video of the rally, I noticed that there were some people behind her, just below the platform and cropped out in the video claiming the rally was faked. However, this still does not explain to me why she points so high after waving, considering the small crowd was below her stage. This also does not explain the videos captured on the camera phones.

Obviously, I believe the video claiming the event was faked to be a hoax. However, I am having trouble explaining the evidence they present.

Here is a video that goes into details very thoroughly, and answers your question perfectly, because it goes into detail of the actual physics behind why the video of the rally and why it looks the way it does.

To summarize, it has to do with how cameras work, especially the zoom feature.

In a nutshell, the news cameras that were at the other side of the gymnasium were elevated and had to zoom in extremely far, in order to capture Hillary and have her take up most of the screen (requiring narrow lenses), this results in distortion for everything in the background. Because of the very narrow lenses used in the news cameras, compared to the very wide-angled lenses in the phones of the people in the video, a different image is created by the phones and the news cameras. What you see in the phones of the crowd is what you would see if you were standing right beside them.

Also in the video you will see videos and pictures taken from other perspectives, which look "natural": 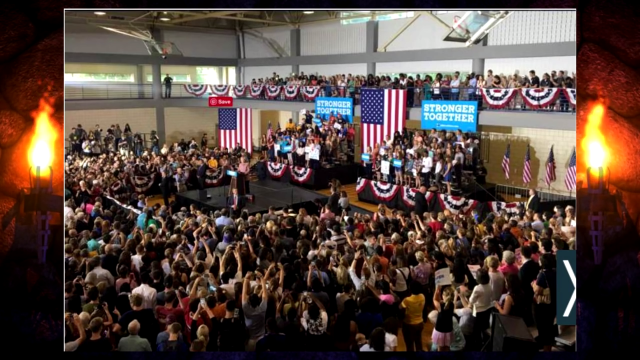 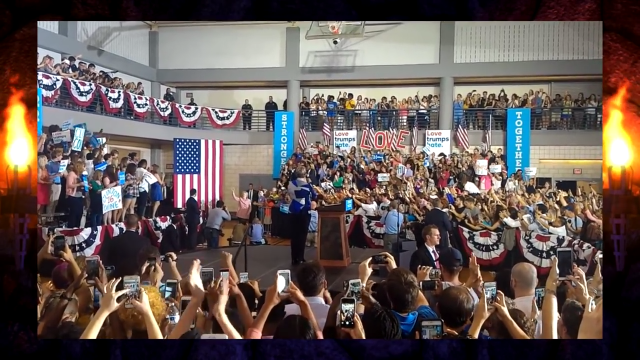 The YouTube video claim would require the BBC and other covering media to be in on a hoax. So, often, one looks for evidence that either one of the competing claims is the "fake" one.

Neither the BBC, showing the event live, nor the person posting the hoax claim need to fake their videos to explain the footage. It's a matter of misinterpreting data and perspective.

The BBC camera is situated at a higher vantage point than audience members, because otherwise you would not be able to see over the crowd and see Hillary walking in front of them. You would see the backs and backs of heads of audience members.

So, "where is Hillary?" is kind of a fairly typical misdirected conspiracy question, because the cameras of the people in the audience are not pointing at something they can't see, they are pointing at the stage, where they know she will be.

The stage is set up at a vantage point to be visible to the audience -the raised elevation of stage and podium to the venue and their central location is typical of any kind of audience-oriented event.

Before she takes the stage, since the BBC camera is following her, it pans away from the audience. We never get to see what their camera screens look at when she would be visible to all the audience members at the floor level.

Here is a different angle shot from the USA today (attribution to the Associated Press). The photo shows us that, as presented in all the news stories, but misrepresented in the YouTube video, this was a college sports venue they were using, with spectator seating all around. 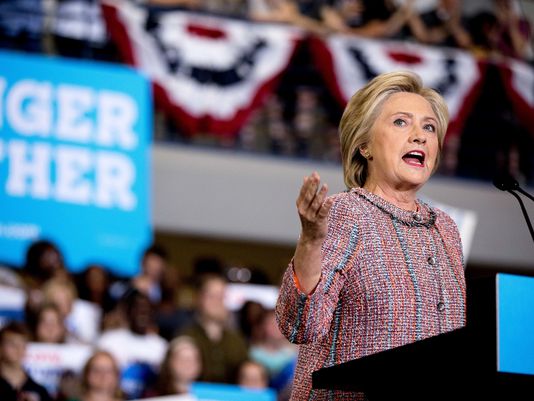 USA Today story that has the photo

You can see a huge blue banner and the semi-circular flag banners hanging from the upper deck behind her and this matches what we see on many of the phones.

The original video assumes there is only a small crowd in front of the stage when repeatedly asking "what is she pointing at?", but this shot also explains why she'd point up in the air behind her - the site of the speech is packed with people even on upper levels, and behind her.

Here are some videos from different sources, to show that it's not all single-sourced from the Clinton campaign.

Given a direct explanation for what we saw in the video that accounts for both her actions on stage and what could be seen in the phone screens in the audience, the doctored video claim is simply not plausible.

Not the answer you're looking for? Browse other questions tagged united-states politics hillary-clinton .