Is this “whites killed by whites” diagram wrong? 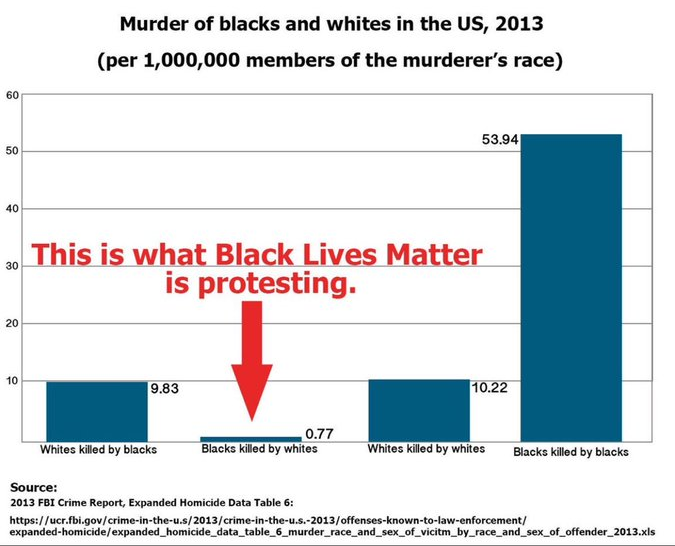 (Sorry for not giving the source: I don't know how to link there.)

The diagram gives the impression that if you're a white person (in USA), then you're about equally likely to be murdered by a black person as by a white person.

However, I found the following quote:

84% Of white murder victims were killed by other whites, according to the Justice Department [PDF, p. 13]

How does one reconcile the diagram with the Justice Department's data? Does it have to do with "per 1,000,000 members of murderer's race"? If so, can anybody explain the math?

Note that according to the Washington Post, 258 black decedents were shot by police officers in the year they studied. I'll leave it up to you if you want to do the math to compare to the other numbers from the image.

That said, there seems to be a separate claim in this question, unrelated to the point that the image was trying to make: That whites are as likely to be killed by blacks as other whites. This is a false claim based on a misinterpretation of what the image shows.

The image is showing Expanded Homicide Data Table 6 as the source of the data. So let's look at that data directly.

Looking at the census data for July 2013:

If we divide that out, we get

These results are different from the image, so it's likely that it used different base numbers for population. They are similar though, so I believe this is the methodology they used.

To make this explicit, I did the following calculations to get the second table:

So, these are results of a calculation, not falsified. They may be slightly inaccurate in that it seems that they are using a source other than the 2013 census data.

Note that I'm doing this math not to make any claims, but simply to explain how the calculations worked.

The diagram gives the impression that if you're a white person (in USA), then you're about equally likely to be murdered by a black person as by a white person.

That impression is incorrect. If we go back to the raw data, 2509 white victims were killed by whites and 409 by blacks. So a white murder victim was about six times more likely to be killed by another white person than a black person.

The diagram adjusts for population. One of the problems with these kinds of comparisons is that there are about six times as many whites as blacks. So looking at the raw data will produce higher numbers for whites than blacks on almost any measure. So it is common to normalize the data so as to make the statistics more comparable. Describing the resulting statistic is complicated, particularly in this case.

Perhaps we might say that a black murderer with a white victim is about as common among blacks as a white murderer with a white victim is among whites. I.e. about ten (rounded up from 9.94) in a million whites murder a white person and about 9 (rounded down from 9.09) in a million blacks murder a white person. Be careful though, as people can easily misinterpret statistics like that. And of course this entirely ignores the possibility that a single person murdered multiple victims.

Not the answer you're looking for? Browse other questions tagged united-states criminology violence racism .

0
Are black Americans more likely to commit crime against white Americans than other black people?
2
Is this chart detailing incidences of homocide by race accurate?

30
Is this a genuine 1965 literacy test?
44
Did Malcolm X say that Islam has shown him that a blanket indictment of all white people is wrong?
81
Do blacks in the US get arrested more often for drug usage despite using drugs at the same rate as whites?
9
Will the United States be made up of more non-whites than whites by 2046?
23
Did Antifa distribute this pamphlet?
48
In the US, are three women killed each day by their male partners?
114
Have more Americans been killed in schools than in military service this year?
12
Does USA imprison people of color at a higher rate than whites for the same crime convictions?
7
Is this 1977 “thank you” letter from Joe Biden real?