Do fitness trackers make you fatter?

The idea of using a fitness tracker is that you should pay more attention to the amount of exercise you get and, therefore, be more likely to get enough. This should support weight loss in people who are carrying too much weight.

A recent study appears to question that basic assumption with evidence. The Times reported the story (on the front page) with this headline:

Fitness trackers can make you fatter.

Here is how Gizmodo reported it:

In a study published on Tuesday, researchers found that fitness trackers weren’t the boon to longterm weight loss they expected them to be...

The study put overweight people on a standard diet for 6 months and then split them into two groups: one with fitness trackers and one with just an internet fitness diary. At the end of another year and a half:

...all of the volunteers returned to the lab to repeat their measurements from the start.

Most were thinner now than at the start of the study (although many had regained some of the weight that they had lost during the first six months).

Those who had not worn activity monitors were, on average, about 13 pounds lighter now than two years ago.

Those who had worn the monitors, however, weighed only about 8 pounds less than at the start.

So having a tracker seems to make you fatter (compared to the study control group).

This is a pretty unexpected result. Is it right?

No. Using a tracker does not make you fatter, and that is not what this study claims.

Lets start with the participants:

(so no already fit people here).

And this important little note:

If weight loss exceeded 6% during each 4-week period or if BMI was 22 or less, prescribed individual calorie intake was increased.

Accourding to the U.S Department of Health 22 is just under overweight (25 being overweight) and most people trying to lose weight wouldn't suddenly increase their caloric intake if their bmi hit 22. So participants were actively monitered and restricted in the type of weight loss they could obtain. This applied to both groups equally, but is important to note.

Of the 237 participants randomized to enhanced intervention, 191 participants received the wearable device that was a component of the intervention starting after month 6 and wore the device for 1 day or longer (median days worn, 170.0...On days that the device was worn, the median wear time was 241.1 min/d ...).

And part of the graph of results: (I couldn't actually save the whole thing as anything but powerpoint, go figure) 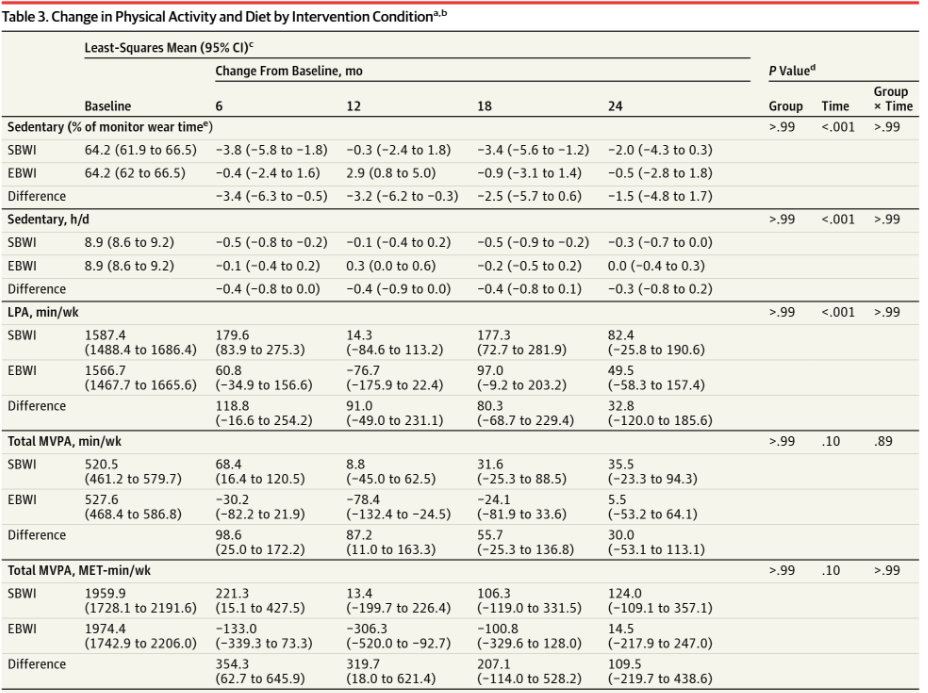 Makes it clear that those that were asked to self-report were significantly more diligent in their reporting then the group with the watches were in their self-monitoring. This shows up in the amount of total exercise over the last 12 months, the caloric intake and in the final results.

Then there is the time period, it's funny because the data collection was finished in 2014, but the study initially started in 2010. Now neither of those years seem very long ago, but in terms of this technoligy, those years describe generations for both hardware and software .See the 2nd gen Applewatch or latergen Fitbit for just how far and fast this tech has come in reliablity to monitor fitness in 2 years.

Finally this was a general study and the author himself stated it best when he said there were limitations to the study, namely:

Additional investigation is also needed to examine for whom wearable devices and other technologies may be effective within the context of weight loss efforts and how these technologies influence other components of weight loss, namely, eating behavior and dietary intake.

As with all tech, it's not a silverbullet one size fits all, it will motivate and push some, while others will still benefit more from the more traditional method of reporting their progress.

Study can be found here.

"The idea of using a fitness tracker is that you should pay more attention to the amount of exercise you get and, therefore, be more likely to get enough. This should support weight loss in people who are carrying too much weight." ...The above statement is erroneous and assumes that exercise alone will cause weight loss. If a person exercises but then eats the calories he just burned, then he won't lose weight.

Not the answer you're looking for? Browse other questions tagged physical-fitness weight-loss electronics .

19
Does eating slower make you lose weight?
16
Does regular exercise improve how you feel?
15
Does exercise make you smarter?
21
Can you harvest energy from radio transmissions?
9
Can artificial sweeteners make you gain weight?
28
Does exercise make you healthier?
1
Does low-calorie/ high-protein diet + fitness regime allow simultaneous muscle growth and fat loss?
11
Can you charge your phone using a non-electrified railway?