It's widely claimed that we share 50% of our DNA with bananas. Does this have actual basis or is it a myth?

Finally, a question covering my nominal area of expertise. To answer this question meaningfully we'll need to define some concepts but first.

Yes, sort of. The statement is factually correct for reasonable interpretations.

I'll link to a more specific stackexchange to support the definitions

To draw an analogy: If someone said "humans share 90% of their skeleton with birds" would it be a reasonable statement? the overall structure is the same, most bones have an equivalent that's longer, shorter, thicker, thiner. The bones might have adaptions for strength or weight but stretch and squish things a little and you'll get something that looks the same. 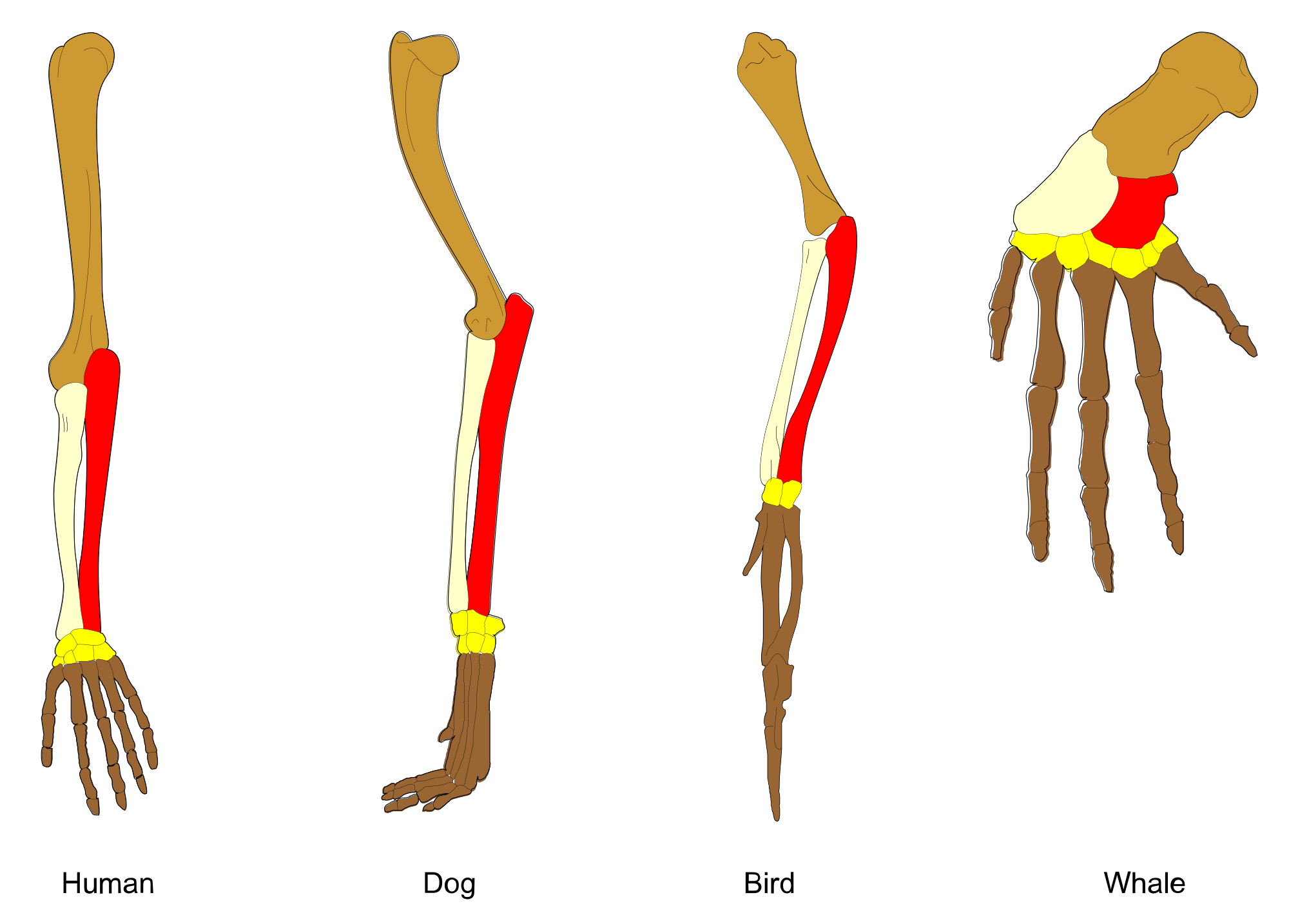 Orthologs are genes in different species that evolved from a common ancestor. Orthologs normally retain the same function.

Paralogs are genes which have been duplicated. One copy may end up doing something very different to the original but retain some things in common.

When do 2 genes count as the same?

Lets look at an example

Histone is found in most species and it's highly conserved. It's not identical across species but it's mostly the same.

In fact a lot of the genes which we need to live are common across many species. Genes to copy DNA, genes to repair cell walls, genes to control temperature, genes to metabolize various sugars. No matter whether you're a human or a banana plant you need a lot of the same basic machinery to live.

The genes aren't perfectly identical but since they mostly have to do the same job and you'll likely die or fail to breed without them, they tend to be highly conserved, with most differences being at less important points in the genes.

The genes get moved around, they get flipped back to front or swap chromosomes or chromosomes get merged or split, but they're generally there somewhere.

For example, here's a mouse genome colored by what sections have homologs in the human genome. 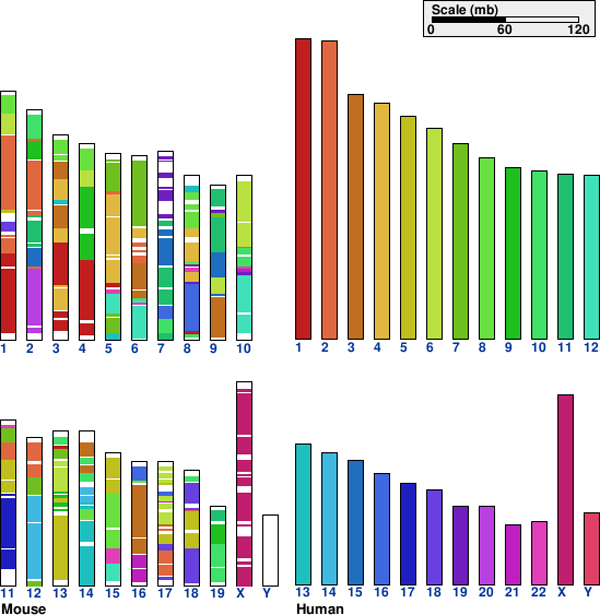 If you count genes sequences with a single base different as not the same, then most humans wouldn't count as very similar to other humans.

If you allow for 1, 2, 3, 4 or more mutations per 100 bases while still counting something as "the same", then you can get almost any percentage you want.

That's why I said "sort of" above.

I could link to some paper where they give some number, but that wouldn't be terribly informative. I could point to 3 more which give different numbers for the same thing because it's all about where you set the cutoff points when deciding if something counts as the same.

The idea that we share 50% of our DNA is, by most obvious definitions of what that might mean, completely false, and trivially so. Per Wikipedia, the human genome is roughly 3 giga base pairs long. The banana (Musa Acuminata) genome, on the other hand, is only around one fifth of that length - 600 Mb according to ProMusa, or just 520 Mb according to the first publication of a reference genome in 2012.

Clearly, then, we cannot align slices of a single copy of the banana genome against the human genome and have them cover 50% of its length, because there aren't even enough base pairs for this to be possible!

Where, then, does this claim come from? Bioinformatician Neil Saunders tried to track down the answer and wrote up his findings in a blog post entitled 50% bananas; the oldest source he can find is this interview with Steve Jones in episode Almost Like A Whale of The Science Show on ABC radio on 12th January 2002), a full decade before the publication of the first banana genome.

Steve doesn't substantiate the claim in the interview, and it comes in the context of a wisecrack about how genomically similar organisms can still be very different from each other:

... we also share about 50% of our DNA with bananas and that doesn't make us half bananas, either from the waist up or the waist down. So there are limits in what genetics can tell us about what it means to be human ...

What's more, a little while before this interview, other sources were claiming we share 50% of our genes with bananas. Here is a source for that claim from April 2001: https://www.pbs.org/wgbh/nova/genome/deco_lander.html*. Therefore, while we can't be sure what Steve's basis was, we can speculate that he simply accidentally misquoted that similar claim, in the course of cracking a joke in a radio interview.

But what about that alternative claim, then?

Murphy's answer suggests that it's reasonable to instead take the claim that we "share 50% of our DNA" with bananas to mean that 50% of humans' tens of thousands of genes have homologs in banana genes. What's more, the oldest source I can track down for any variant of the "50% banana" claim - the previously linked 2001 interview with Dr Eric Lander, in which the interviewer, science journalist Robert Krulwich, brings it up - says that we share 50% of our genes, not 50% of our DNA. So, is this variant of the claim true?

As best I can tell, no. At the very least, it's dubious and I cannot find any substantiation for it.

As previously noted, the banana genome was not sequenced until 2012, yet this claim dates back to at least 2001 - and so it was made without access to the data we now have. And Neil Saunders, in his "50% bananas" blog post, tried using the Orthologous Matrix Browser - a public tool for finding orthologs of genes - to look for orthologs of human genes in the banana genome. He reports that it only finds about 3500 human genes with such orthologs. (Specifically, 3440 - I get a slightly different number, perhaps due to changes to the OMB's algorithm.)

You can replicate Neil's result yourself by entering HUMAN and MUSAM (corresponding to Musa acuminata, the scientific name for bananas) at https://omabrowser.org/oma/genomePW/ and clicking "get pairs". The OMB returns a TSV of ortholog pairs, with the ID of a human gene on the left and its corresponding banana gene on the right. As Neil notes, if we count the number of unique human gene IDs listed, then we get the total number of human genes that OMB's algorithm thinks have at least one ortholog in the banana genome. Such counting is shown below in Python:

He notes that this,

given that there are twenty thousand-ish human protein coding genes, equates to around “17% banana”.

Of course, the OMB is just using an algorithm to attempt to find orthologs by looking at reference sequences. There may be some defensible alternative approach that yields a different result. But if so, I have not been able to find it; the only attempt I know of to fact-check the 50% claim in light of published reference genomes is Neil's, and his method, at least, clearly finds that the claim is false.

* I emailed Professor Lander to see if he remembered the original source from which he heard the claim. Alas, he does not. He speculated it might be gene families to which the claim originally referred, rather than genes.

34
Does DNA add credibility to the theory of evolution?
9
How reliable is identification via DNA matching?
14
Has natural occuring genetic insertion ever been observed in direct offspring of some organism?
23
Are Adolf Hitler's DNA samples available?
16
Do corporations own human DNA sequences?
16
Do humans share 99% of their DNA with rats?
2
Is the chemical composition of genetically modified crops tested?
9
Do commercial DNA synthesis labs maintain a "watch list" of dangerous DNA sequences?
5
Have more than a million people had their whole genomes sequenced by the end of 2018?