A drop bear is a carnivorous bear that is known well for hanging in the tops of trees, and dropping down on potential prey to attack, hence the name. They eat medium-large mammals, often times many times larger than itself. While there is some resemblance to a koala, drop bears have been noted to have large fangs, and be much more aggressive.

The site AustralianMuseum.net, An institute dedicated to preserving collecting and maintaining science associated with Australia, has an article on drop bears, with details on its weight, height, habits and diet. The website claims

Danger to humans and first aid Bush walkers have been known to be 'dropped on' by drop bears, resulting in injury including mainly lacerations and occasionally bites. Most attacks are considered accidental and there are no reports of incidents being fatal.

However, something that leads me to believe that the source is not valid is a comment by the user Frank Jaeger stating:

It's true. It's not even funny. A drop bear killed my kids. They attack baby goats too apparently, I take Comfort in knowing that we are at least one step closer to understanding them and if we can find out enough about them and demystify them we might one one day stand a chance...

Given, the last time this article was updated was 30 October, 2015 (11 months ago), and the comment was posted 10 months ago, it would seem important to update the article to report a fatal event.

There are many many other Articles on the internet sourcing drop bears as a vicious animal, but only 2 sources (hoaxes.net and Wikipedia), along with some skeptical users sprinkled about, refute their existence.

Do these creatures really exist?

I'm going to take a wild guess, and say the first time you heard of drop bears was from a recent Pharyngula post that mentioned them. I'm guessing a few people were introduced to the concept by that post.

As both an Australian citizen and an avowed skeptic, this is a difficult question to answer. To spoil a traditional joke is seen as unaustralian. However, back in 2011 when I tried to go along with a joke, and argue that Santa existed in a now deleted answer I was pilloried, so to show I have learnt my lesson, I will be a spoilsport now.

Drop Bears are a traditional Australian hoax playing on travellers' fears of the local wild-life and the innocent appearance of koalas.

There are tell-tales in the article to show it is tongue-in-cheek. 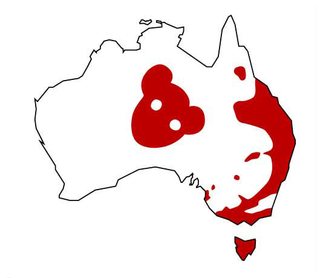 The folk remedies are part of the joke because any child (or adult for that matter) who falls for the hoax on a camping trip reveal their gullibility by having a distinct smell (Vegemite behind the ears) or visible sign (forks in their hair).

The National Museum is not the only serious source that have had fun with this story. National Geographic had an article about them on April 1st , 2013.

Drop bears are less likely to attack people with Australian accents, according to experts at the University of Tasmania

It was later edited the article to add:

This article was put together for April Fool's Day. Please note it expired at 12pm 1 April 2013. Drop Bears belong only in modern Australian mythology. :)

Not the answer you're looking for? Browse other questions tagged biology australia .

19
Did NASA refuse to pay a $400 fine for littering caused by the deorbiting of Skylab?

5
Do evil twins exist?
25
Does Alexandria's Genesis exist?
11
Do living lizards exist inside stones?
20
Does one drop of nicotine kill a horse?
7
Has a carbon price lead to a 8.6 percent drop in electricity demand in Australia?