Will most tropical and temperate areas be uninhabitable with a 5 degree increase in temperature?

I've seen this image circulated on message boards a few times, and I'm wondering if it has any scientific basis.

Red is uninhabitable land, and green is all that is left after a global rise of 5°C. 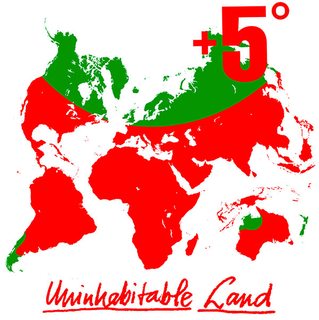 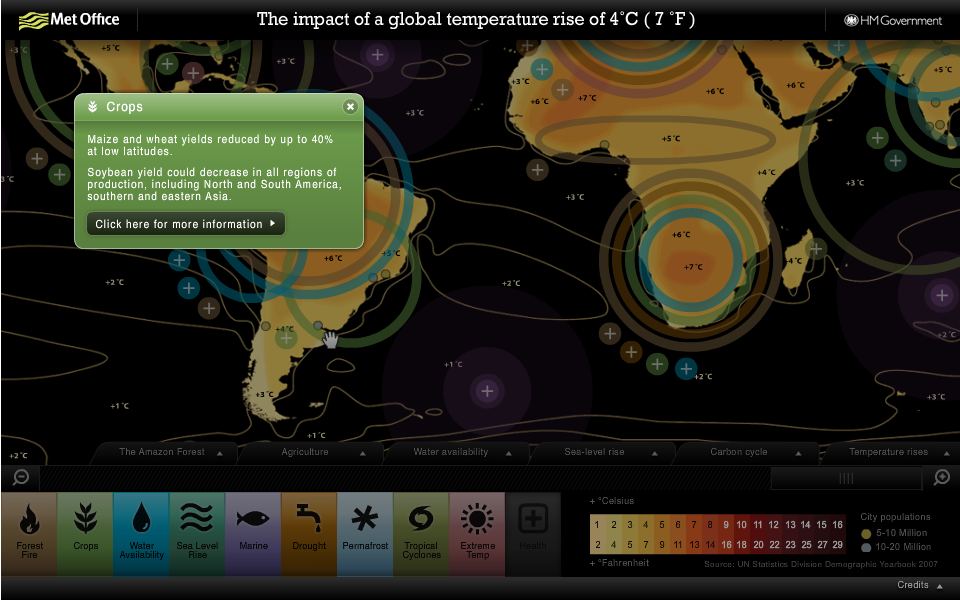 No. Here is an interactive map from the UK Met Office showing the likely impacts of a 4C rise. For instance if you click on the button over Argentina it suggests a 40% reduction in maize and wheat yields at low latitudes. I think it is rather unlikely that a further degree would go from reduced crop yields to uninhabitability. As usual the IPCC WG1 and WG2 reports are a better source of information. Update, in the talk, Westwood says that the map is actually for 4 degrees, so the MetOffice impacts map directly constradicts Westwood's chart.

BTW the final draft of the IPCC AR5 WG2 report seems to use the word "uninhabitable" twice, and on neither occasion does it refer to large areas of the planet, but more local problems (extreme weather/sea level rise), so I don't think there is any support for Westwood's chart from the relevant IPCC report either.

The comment about climate change being unstoppable after it goes past 2C and will inevitably then reach 4C has no basis in science AFAICS. In the absence of "tipping points" (e.g. sudden release of GHGs from methane calthrates) the rise in temperature is expected to be a fairly smooth function of cumulative fossil fuel (and land use change) emissions, there is no special breakpoint at 2C as far as I am aware.

A question about her (rather extreme) views on banking is probably in order as well, as it suggests there may be some "motivated reasoning" behind her take on climate change.

More of Vivienne Westwood's speech comes from Huffington Post http://www.huffingtonpost.co.uk/vivienne-westwood/vivienne-westwood-plan-to-stop-climate-change_b_8917340.html where she said "intellectuals" needed to "destroy the credibility of the press". In more detail she said

Most people now think climate change is under control, our leaders are taking care of it.

The press went on to tell us that the [Paris] agreement is not binding and the UN says we (business as usual) are on course to hit between +2.7 and +3.5. But most people ignore that unsettling part of the information. They already “got the story”. Once they got the story there is no room for other information, especially if it conflicts; the hole has been filled and everybody’s back to square one. People don’t see any other way than business as usual. No change.

Global warming is at the tipping point. If we go past it, we can’t stop it. All the methane kicks in.

This map is the world at 5 degrees. If you draw a line parallel with Paris, everything below that is uninhabitable. This means by the end of this century there will only be one billion people left. Our politicians, they are preparing for this.

These are extreme views. There is no scientific consensus for runaway climate change or that climate change will cause the human population to fall to 1 billion by 2100 (the United Nations recently projected 11 billion http://www.un.org/en/development/desa/news/population/2015-report.html).

Nor is the map particularly credible - the range of temperatures between currently habitable zones within that red area is already much wider than 5 degrees (think of the Tibetan plateau for example). And despite the crude line through Paris (the east coasts of North America and Asia are generally cooler than the west coasts of Europe and North America at the same latitude, for reasons associated with wind and the Earth's rotation), something more complicated has been drawn in the southern hemisphere, with an incredible treatment of northern Australia (currently largely hot desert)

Sherwood and Huber (2010) look at uninhabitability due to heat stress. They estimate that if the earth warms by 11-12 degrees Celsius, regions where more than 50% of the world's current population lives would become exposed to unprecedented heat stress: you couldn't live there without air conditioning, you couldn't work outdoors, you couldn't maintain livestock outside, and a power failure would put you at risk of death due to heatstroke.

But that's considerably more than 5 degrees of warming.

Despite the uncertainty in future climate-change impacts, it is often assumed that humans would be able to adapt to any possible warming. Here we argue that heat stress imposes a robust upper limit to such adaptation. Peak heat stress, quantified by the wet-bulb temperature TW, is surprisingly similar across diverse climates today. TW never exceeds 31 °C. Any exceedence of 35 °C for extended periods should induce hyperthermia in humans and other mammals, as dissipation of metabolic heat becomes impossible. While this never happens now, it would begin to occur with global-mean warming of about 7 °C, calling the habitability of some regions into question. With 11–12 °C warming, such regions would spread to encompass the majority of the human population as currently distributed. Eventual warmings of 12 °C are possible from fossil fuel burning. One implication is that recent estimates of the costs of unmitigated climate change are too low unless the range of possible warming can somehow be narrowed. Heat stress also may help explain trends in the mammalian fossil record.