Are activities in which both people bleed on each other considered "No Risk" for the transmission of HIV?

My friend, who was a HIV care provider, claims explicitly that "no one has ever transmitted HIV through wound to wound contact" and that therefore there is no significant risk to hockey players transmitting HIV in a fight like this, presuming one of them carried the disease. 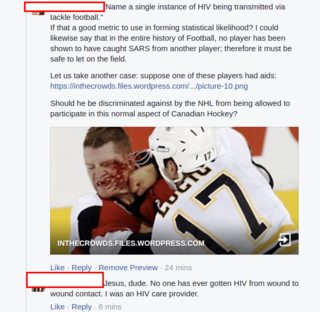 The HIV helpline states that

For HIV transmission to be possible there needs to be a body fluid, an activity such as unprotected anal or vaginal intercourse and a direct access for the virus to enter the bloodstream. This confrontation that you experienced would be considered a No Risk activity even if there was blood from her that may have made contact with the scratches. This is due to the HIV virus being very fragile and once exposed to air it is no longer transmissible. Furthermore, in order for HIV transmission to be possible from an open cut, this cut needs to be very deep and not just a scratch.

Is it true that wound to wound contact, poses no significant risk?

Regarding the claim that scratching is a "No Risk" activity, here is a study showing no HIV transmission from scratches and bites from a person with contaminated fingers and mouth:

To examine the relative risk of transmission of the human immuno-deficiency virus (HIV) through bites and scratches, we studied 198 health care workers, 30 of whom were traumatized in this fashion while caring for an aggressive AIDS patient. This violent patient frequently bit or scratched others, his mouth had blood and saliva, while his fingernails were at times soiled with semen, feces, and urine. He was HIV antibody and antigen positive. Although HIV was recovered from his peripheral blood lymphocytes, after 2.5 years of serial follow-up, all traumatized personnel were clinically normal, no HIV was cultured from their blood, and all were HIV antibody and P24 antigen negative. We conclude that this viremic AIDS patient, while producing copious amounts of body fluids, failed to infect those caring for him through bites and scratches. The risk of transmission of HIV through this route under similar conditions should be low. Tsoukas et al, 1988. Lack of transmission of HIV through human bites and scratches.

In extremely rare cases, HIV has been transmitted by
[...]
- Contact between broken skin, wounds, or mucous membranes and HIV-infected blood or blood-contaminated body fluids.
[...]
Can I get HIV from being spit on or scratched by an HIV-infected person?
No. HIV isn’t spread through saliva, and there is no risk of transmission from scratching because no body fluids are transferred between people. CDC: HIV Transmission

But extremely rare of course doesn't mean that there are no cases, which would make the claim that ""No one has ever transmitted HIV through wound to wound contact" false:

To put that into perspective:

For those of us who work in the health care arena, the chances of transmission through splashes of blood, a knife or a needle are more likely than in sports and you still don't see a lot of cases, although it's not zero.
[...]
In boxing, the wounds can happen dramatically and quickly. But the risk is still very, very small. LA Times, 1996. Boxer's HIV Test Heats Up Debate Over Risk to Others

And here is an article about HIV transmission during sport in general:

There are no confirmed reports of HIV transmission during sport.Kordi & Wallace, 2004. Blood borne infections in sport: risks of transmission, methods of prevention, and recommendations for hepatitis B vaccination

I would conclude that scratching is indeed a no risk activity, while being beaten to a bloody pulp is a low risk activity.

To your point about excluding players due to their HIV status: If the player is receiving proper medical care and their viral load is suppressed, the change of infection even for high risk activities is low, for low risk activities it is essentially none.

Not the answer you're looking for? Browse other questions tagged medical-science environmental-health sport hiv-aids .

1
Is the safety advice regarding asbestos consistent with advice about other risks?

11
Does the practice known as MBP cause HSV-1 in infants?
7
What are the chances of female-to-male HIV transmission during straight sex?
9
Are the chances of contracting HIV from an infected person this low?