Does the Wall Street Journal change headlines based on location?

I found saw a recent image going around on Facebook: 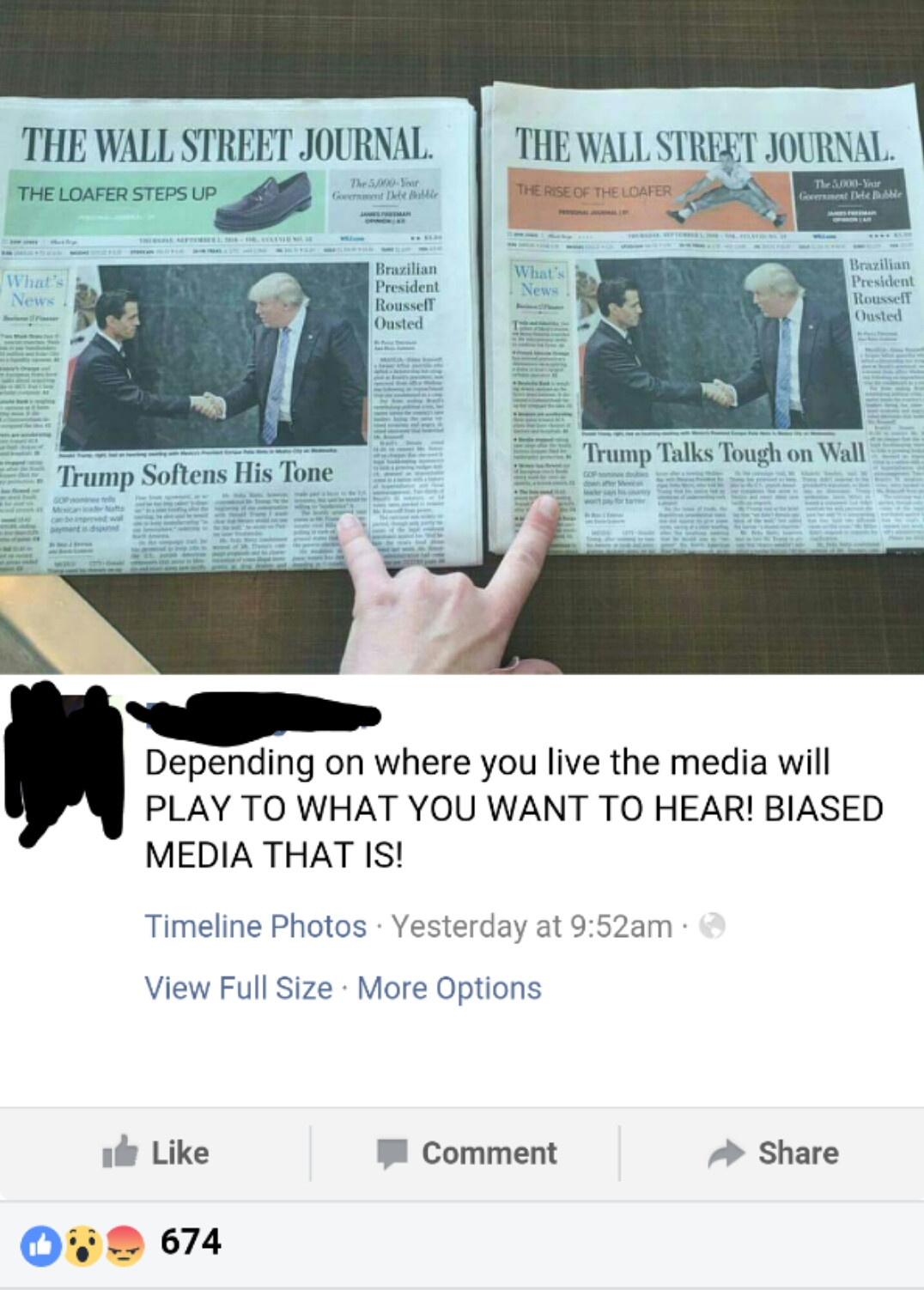 The picture shows two copies of the wall street journal that look nearly identical. They feature the same image but have very different headlines. The claim is that both copies were distributed, but to different locations, based on "what you want to hear."

It certainly looks very convincing, but as we know in today's world photos can be easily faked. Additionally the photo may be showing the headline that did run and a headline that almost ran rather than two separate headlines that ran in different locations.

So did the Wall Street Journal run two versions of the story based on location? If it did, is this a common practice, as the claim suggests? How do they decide which subscribers get which version?

The headlines come from different times in the day, not different markets, and reflect changing situations during the day.

As usual, Snopes has already answered this.

These opposing headline editions were not distributed to different political or geographic markets, nor were they intended to influence voters.

Colleen Schwartz, the Vice President of Communications at The Wall Street Journal, confirmed that these editions were printed at different times, not in different markets. The edition on the left was published after Trump met with Mexican president Enrique Peña Nieto early in the day (and referenced the seemingly cooperative tone of their discussion), and the edition on the right was published after Trump delivered a speech on immigration later in the day (and referenced Trump's reasserting his stance that he would force Mexico to pay for the building of a wall along the U.S.-Mexico border):

Print newspapers sometimes undergo revisions throughout their daily runs and typically employ marks to distinguish the various editions — in this case the differing WSJ editions are distinguishable by the number of stars displayed in the masthead.

If there really were regional differences, somebody would have an example that was NOT from a day when a presidential candidate gave two contradictory speeches in a single day.

In answer to a comment, it is clear from the picture that the article has changed, not just the headline.

Not the answer you're looking for? Browse other questions tagged united-states politics media .

21
Is this photo of Occupy Wall Street authentic?
12
Is the EPA's regulation of particulate matter justified with evidence?
72
Are headlines often not written by the person writing a newspaper article?
45
Was the Obama administration responsible for the decision to move the US embassy in London and the sale of the old location?
12
Did the Houston Police Department intentionally target the house on Harding Street?
4
Does illegal immigration change the U.S. electorate as claimed by Larry Elder?
6
Did the IG change his conclusion in the Sharyl Atkisson investigation?