Do more DUIs occur the morning after drinking rather than the night of?

There have been a few circulations of a claim that more DUIs occur the morning after drinking on certain holidays versus the night of drinking. The idea is that DUIs obtained by unsuspecting people who have slept and then chose to drive the morning after thinking their system is free of alcohol outnumber DUIs obtained by those who drive home that same night. For example:

Is there any empirical evidence to support this claim?

I couldn't find anything about the US as a whole, but there are statistics for DUI (or DWI, among other acronyms) arrests for smaller parts of the US by time of day. (For information about the difference between a DUI arrest and a DUI ticket, see this site.)

There are different potential interpretations of what "the morning after" is (for example, the period between midnight and noon), but the intended interpretation is probably, as you said, "people who have slept and then chose to drive the morning after". While there's no way to tell who went to sleep (and who didn't) before their DUI arrest, a reasonable guess can be made. Although alcohol affects sleep, I would expect most people, after a night of partying, to not be awake and out driving until 5am or (much) later. (Reasoning: Most Americans leave for work between 7 and 8am. Plus, 5am is always before dawn at my latitude, with sunrise today, New Year's Day, being ~7:30am. 5am is probably overly early, but the same conclusions apply if you pick a later time.) There are very, very few DUI arrests that happen between 5am and noon, much fewer than 8pm to midnight or midnight to 3am/4am (and that also includes anyone who woke up sober, got drunk, and then drove their way to a DUI arrest sometime between 5am and noon).

(This graph starts at 6pm.) 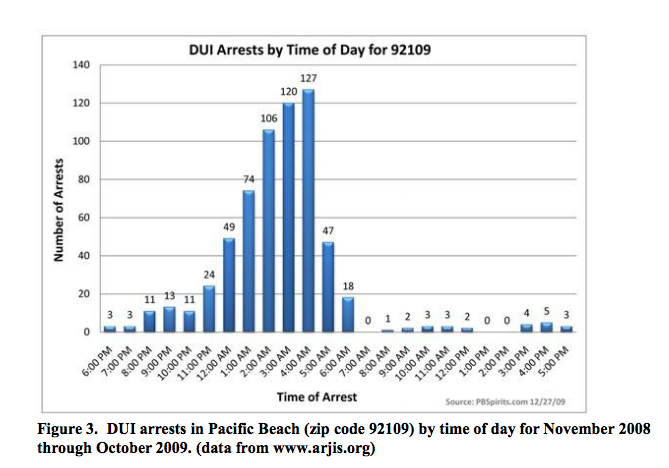 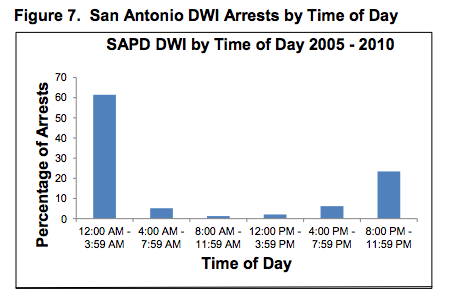 (This graph is backwards; read it chronologically from right to left.)

Nearly 3,400 persons completed the DUI Offender Survey across classes for persons with a DUI across the state of Montana. 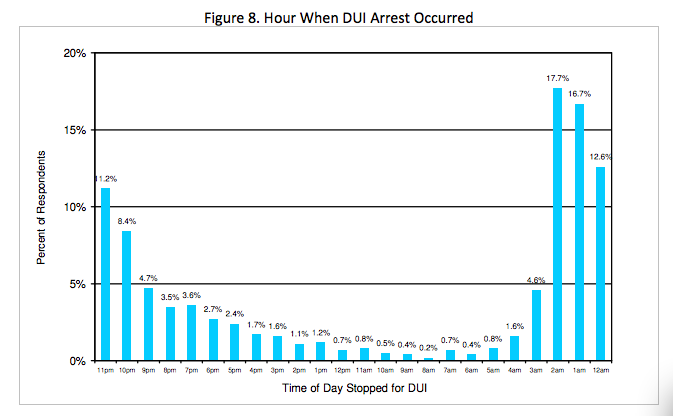 (This graph only displays 8pm to 5am.)

The data set contains information on all arrests made between 1998 and 2007... 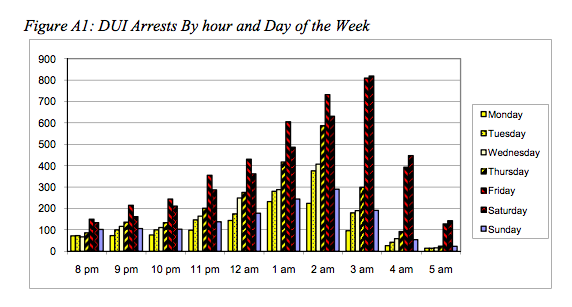 One for the Road: Public Transportation, Alcohol Consumption, and Intoxicated Driving 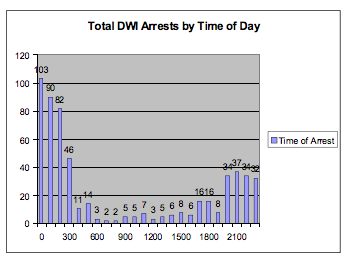 Not the answer you're looking for? Browse other questions tagged criminology alcohol .

56
Is LSD more harmful than alcohol?
17
Is Red Bull and Vodka more dangerous than other spirit cocktails?
10
Are there 10 time more home invasions in the UK than the USA?
13
Does drinking recommended amounts of alcohol do more harm to children aged 13 to 18 than it does to adults?
17
Do societies that are less abstemious have more sensible drinking patterns?
33
Does the death penalty in California cost more than $300m per execution?