A 2016 article in the Guardian claims that Texas has seen a doubling in the maternal mortality rate after the closure of 80 family planning centres giving obstetric and gynaecology advice to pregnant women. In the words of the article:

The rate of Texas women who died from complications related to pregnancy doubled from 2010 to 2014, a new study has found, for an estimated maternal mortality rate that is unmatched in any other state and the rest of the developed world.

Here are the raw numbers claimed in the article:

The study these numbers are based on can be found here. The relevant graph was also posted to reddit here: 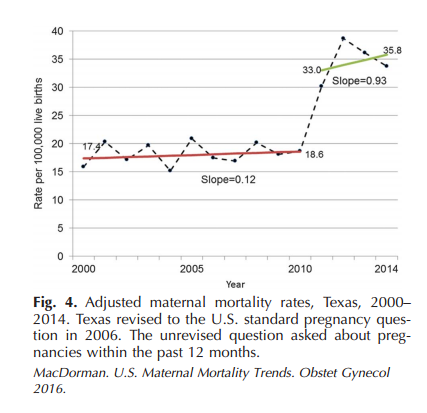 For comparison, here is the worldbank list of maternal mortality rate by country.

Countries that have a higher rate than Texas (in 2014, which is the relevant year), and their human development index from the same year:

The HDI is a commonly used metric to define the development status of a country, but not the only one. The IMF for example does not consider Argentina to be an advanced economy, but lists it as "emerging market and developing economy". Another categorization is the one by the CIA in the World Fact Book, which includes South Africa as developed country, which has a mortality rate of 138.

Not the answer you're looking for? Browse other questions tagged mortality pregnancy epidemiology .

43
Is the number of childhood vaccines correlated with infant mortality?
6
Does the CDC over-report annual flu deaths in the U.S.?
8
Did banning abortion in Chile lead to lower maternal mortality?
26
Does rabies have an almost 100% mortality rate with around 160 deaths per day?
7
Do sleeping pills have a comparable mortality hazard ratio as cigarette smoking?
38
Does mortality fall when doctors go on strike?
11
Did the Neolithic Revolution increase infant mortality rates?
5
Does excess salt in food cause thousands of deaths per annum in the UK?
9
Is India drastically undercounting covid deaths?