The creationist site, Remnants of God claims that dinosaurs - and in particular Tyrannosaurus Rex - were herbivorous.

Were you aware that Tyrannosaurus Rex was not a meat eater? Yes, I am fully aware that every evolutionist, and Hollywood director insists that he was. But Christian scientists have recently discovered two things about T-Rex that proves we have all been lied to for quite some time. They found that the roots of T-Rex’s teeth were only 2 inches deep. That means, had he bit into the hide of another dinosaur in his day he would have lost all his teeth. When you compare the size of T-Rex and the fact his roots were only 2 inches deep, he couldn’t have possibly been able to break the hide of such animals as most evolutionists have him eating. His teeth would have broken off before he even broke the skin. Better yet, were you also aware that these same scientists took one of the teeth they dug up, cut it in half, and they actually found the teeth to be gorged with chlorophyll all the way to the center of the tooth. This confirms he never ate meat. Ever.

Is it true that T. Rex were herbivores?

There was some scientific debate about whether the T. rex was a predator or a scavenger, but there is absolutely no debate that it might have been a herbivore. The current state of research is that it was probably both a predator and a scavenger.

Here is a paper providing evidence for predatory behavior:

Teeth too weak to bite?

There is no evidence that the teeth of the T. rex would fall out if it were to bite meat. Quite the opposite:

The structural analysis technique finite element analysis (FEA) is employed here to investigate the functional morphology and cranial mechanics of the T. rex skull. In particular, I test whether the skull is optimized for the resistance of large bi–directional feeding loads, whether mobile joints are adapted for the localized resistance of feeding–induced stress and strain, and whether mobile joints act to weaken or strengthen the skull overall. The results demonstrate that the cranium is equally adapted to resist biting or tearing forces and therefore the‘puncture–pul’ feeding hypothesis is well supported. Finite–element–generated stress–strain patterns are consistent with T. rex cranial morphology: the maxilla–jugal suture provides a tensile shock–absorbing function that reduces localized tension yet ‘weakens’ the skull overall. Furthermore, peak compressive and shear stresses localize in the nasals rather than the fronto–parietal region as seen in Allosaurus, offering a reason why robusticity is commonplace in tyrannosaurid nasals. Rayfield, 2004. Cranial mechanics and feeding in Tyrannosaurus rex

There is also The variation of angles between anterior and posterior carinae of tyrannosaurid teeth [Reichel, 2012], but I couldn't access the paper itself. Science Daily summarizes it like this:

New research shows that the T. rex’s front teeth gripped and pulled, while the teeth along the side of the jaw punctured and tore flesh.

The estimated bite force of the T. rex:

I was unable to find the paper of the "scientists" who dug up a T. rex tooth and found "chlorophyll all the way to the center of the tooth". I was also unable to find any evidence that the teeth of actual herbivores would contain chlorophyll.

This isn't a primary source, but I thought I'd include it anyway:

[H]erbivores have wide flat teeth that are adapted to grinding grass, tree bark, and other tough plant material. Wikipedia: Herbivore 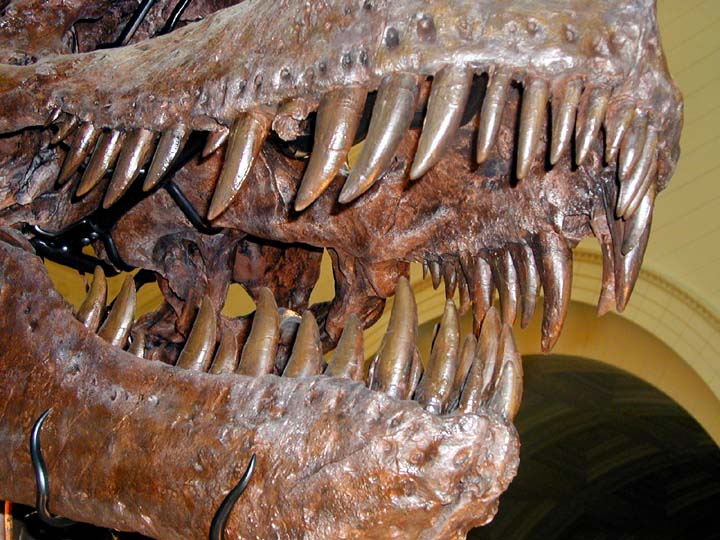 Not the answer you're looking for? Browse other questions tagged paleontology .