Has Google Maps represented Palestine as a country in the past?

I saw quite recently, on social media, an AJ+ video expressing outrage at the fact that Google Maps does not depict Palestine as a country, instead tagging it as part of Israel and cordoning it off from the rest of Israel with a dashed line, much like it does with several other territorial conflicts such as Crimea or South Ossetia. 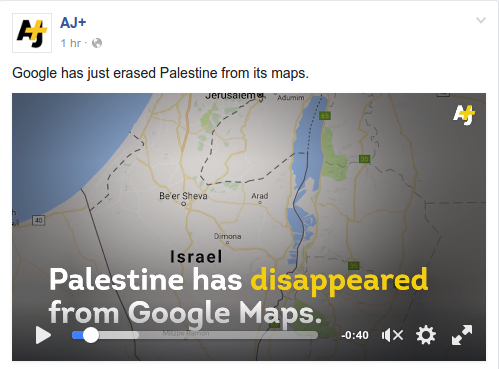 What really bugs me is the use of the word just by AJ+, which sort of implies that the change is rather recent. Indeed, there has certainly been a huge recent spurt of interest in the topic, which is well documented by the Google Trends results for 'google maps palestine', which show a ~30 to ~50-fold increase between the end of July and now.

However, I can't find any evidence that this change is recent, and to the best of my memory the Palestinian territories have been depicted like this on Google Maps for quite some time. My question, then, is whether this change is indeed recent, or whether it is old news and only now being propelled to the top of the news pile. If the former is true, it would be good to know how it was depicted before and when the change took place; in case of the latter, it would be interesting to know which media outlet or outlets first took up the story.

(It should go without saying but I'll say it anyway: The choice to depict the Palestinian territories in this way is certainly controversial and there are multiple views on whether it is correct or not. This is not the place for that controversy - I am solely interested on the factual timeline for when this depiction has been in use in Google Maps, and at what times any changes took place.)

It seems the OP jumped the gun by writing a draft of the post and sitting on it, and then posting the question without checking up on the old video. AJ+ has deleted that video and put up a new one, 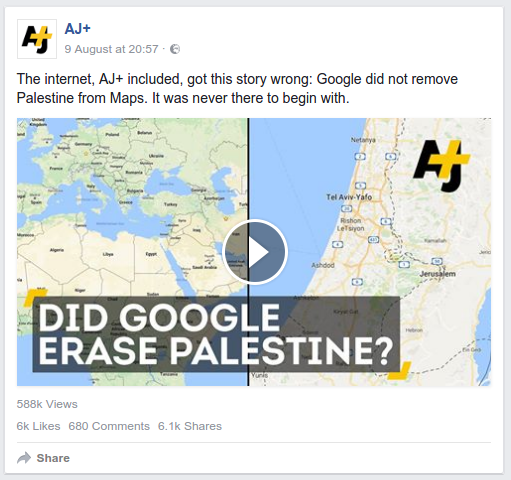 which apologizes as follows:

The internet, AJ+ included, got this story wrong: Google did not remove Palestine from Maps. It was never there to begin with.

(The Google Trends spike, on the other hand, just keeps growing, of course.)

Not the answer you're looking for? Browse other questions tagged politics geography google .

8
Has Britain invaded most countries in the world?
28
Is the US the only country where anyone can declare their own candidacy for president?
36
Is Spain ”the second most mountainous country in Europe”?
60
Are 41% of Donald Trump supporters in favor of bombing Agrabah (the country from Aladdin)?
67
Did Donald Trump say republicans are the dumbest voters in the country?
91
Was Morocco the first country to recognize USA?
6
Is Google causing 40% of the CO2 emission of all internet traffic?
9
Could a foreign head of government be inadmissible to the US because of past drug use?