Did Seth Rich give Wikileaks the DNC leak emails?

This image has a few claims, are they true? 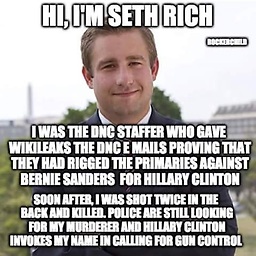 Hi, I'm Seth Rich. I was the DNC staffer who gave Wikileaks the DNC emails proving that they had rigged the primaries against Bernie Sanders for Hillary Clinton.

Soon after, I was shot twice in the back and killed. Police are still looking for my murderer and Hillary Clinton invokes my name in calling for gun control.

Did Seth Rich give Wikileaks the DNC leak emails?

This is answered in the question that @jwodder mentions. Snopes did an analysis of a closely related question. I think the answer is no and I'm confident Snopes would agree, based on their answer. Also, the Washington Post has a piece debunking the claims above, in which they note that this idea "doesn’t make any sense when compared to all the available evidence." It ties this conspiracy theory largely to Roger Stone, a longtime Trump advisor who most recently appeared in the news for falsely suggesting that Khzir Khan and his wife were agents for the Muslim Brotherhood (among other things).

According to those sites, on the individual claims that:

More importantly, I have seen no positive evidence suggesting that the claims are true.

tl,dr: No. Assange also hasn't said that he's the source.

Various news outlets report like Slate that Julian Assange suggested that Seth Rich gave the documents to Wikileaks. I will start with my interpretion of what Julian said. He saw Julian Assange two times at the Chaos Computer Congress in Berlin giving a speech and talk with various hackers in that space, so I think I can decently parse what Julian is saying. It a circle of people who don't think in terms of Democrats and Republicans but who's political agenda is very different.

In it he brings up the case of the DNC staffer Seth Rich being shot in a way that hasn't yet been officially found to be a robbery concerning. The moderator asks him what he's suggesting and he answers:

“I am suggesting that our sources, ah, take risks and they, they become concerned to see things occurring like that.”

I read Assanage as saying that there's a chilling effect on sources who might worry for their lifes because whether or not Seth Rich was killed for political purposes is unknown.

Then the anchor asks "“But was he one of your sources then, I mean?" and Assange answers:

Wikileaks policy is not only about not explicitely saying who the source of material happens to be. It's also not to reveal any information that can be used by outside parties to determine who the source happens to be. Wikileaks is serious about that policy and Julian isn't the person to intentionally violate it.

This should not be taken to imply that Seth Rich was a source to WikiLeaks or to imply that that his murder is connected to our publications.

At the same time Assange does seem concerned that the murder has a chilling effect on sources and that it's important for the work that Wikileaks is doing that the case get's resolved.

Does Assange act in a way that predictably leads to journalists writting the story that he suggests that Seth Rich leaked the documents? Yes, but if you would ask him and he answers candidly the answer would likely be that those journalists don't care about reporting the truth and are under deadlines to get page views. From his perspective it would be the mainstream media journalists who are spreading a conspiracy theory because they are too lazy to parse his statements in detail and try to dump was he's saying down.

According to what Snopes writes it's unlikely that Seth Rich had the access to this kind of information.

As far as motive goes people get covertly killed in political conflicts to prevent them from engaging in an action. If he already gave all his documents to Wikileaks that motivation wouldn't exist. It's also doubtful to kill in this way to create deterence against future leakers. Someone intend on creating deterence could have made the story look differently to deter more.

In summary there's no evidence that points to Seth being the source, doubt about whether he could have been the source given his access to information and lack of motive for the act as stated.

Not the answer you're looking for? Browse other questions tagged united-states security wikileaks .

2
Did Chipotle give away free burritos on Feb 8, 2016?
3
Did Shawn Lucas die a month after he served the DNC a lawsuit alleging “fraud and other claims”?
18
Were the “DNC leak” emails stolen by the Russian government?
96
Is it illegal for regular US citizens to possess or read the Podesta emails published by WikiLeaks?
36
Did 17 U.S. intelligence agencies claim that Russia was behind the DNC hack?
8
Did Edward Snowden leak documents on aliens?
38
Did the DNC claim in court that it has no obligation to have a fair and impartial primary?
18
Do the “Presidential Alerts” give the government full access to all phone functionality?