Are one-third of human deaths from "poverty-related causes"?

I found a poster that makes some incredible claims, and I want to see how well they stand up to scrutiny. The citation is vague, and I wonder how accurately the claims represent the sources, if at all. 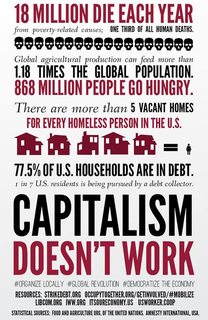 Likely original source: "Poverty and Human Rights" article by Thomas Pogge (published among documents on the site of UN Commissioner of Human Rights).

Accuracy of the claim to that original source: Accurate

Reliability of the source's data itself: Original source did NOT cite that statistics, although many other stats in that same article are well cited. As such, the data is NOT reliable, being un-cited.

Usage of logical fallacies: Possible but hard to ascertain given the lack of proper citations to proper research. Even if the stat is accurate, this research sounds like makes no effort to attribute the deaths to actual poverty, as opposed to causes that may be associated with poverty. To be clear, that doesn't make the claim untrue, just unproven.

Leaving aside the accuracy of the data or the claim, most of poverty-related-caused deaths clearly occur in 3rd world countries, NOT in capitalist countries, especially if you look at causes listed. As such, blaming capitalism for this is an absolutely false conclusion to arrive at.

Moreover, it can be shown that capitalism was arguably the greatest contributor to reducing poverty.

China (which has never shown any interest in MDGs) is responsible for three-quarters of the achievement. Its economy has been growing so fast that, even though inequality is rising fast, extreme poverty is disappearing. China pulled 680m people out of misery in 1981-2010, and reduced its extreme-poverty rate from 84% in 1980 to 10% now (source)

“Aid is just a stop-gap. Commerce (and) entrepreneurial capitalism takes more people out of poverty than aid. … In dealing with poverty here and around the world, welfare and foreign aid are a Band-Aid. Free enterprise is a cure. … Entrepreneurship is the most sure way of development.”

I left a comment explaining why I'm only addressing claim #1. Mostly because clumping all 4 together is too broad

Not the answer you're looking for? Browse other questions tagged economics poverty .

6
Did John Lennon say this skeptical thing about foreign aid to poor countries?

15
Is it possible to identify where Euro banknotes are from?
12
Are the specific claims from the "WSJ 16" climate skeptics true?
147
Are there 96 million workers in the US who want a job and can't get one?