Is this graph of changes in real wages since the recession correct?

This chart has been doing the rounds lately. It seems to be based on a TUC (UK trade union) analysis of the 2016 OECD Employment Outlook publication (Figure 1.6). But that particular figure shows changes in real wages over four consecutive periods since 2007 and clearly summing these numbers would not give the statistic they claim.

The OECD itself has a perfectly good tool for analysing real wages (https://data.oecd.org/earnwage/average-wages.htm) and it seems to give similar trends but very different actual figures.

What is going on? 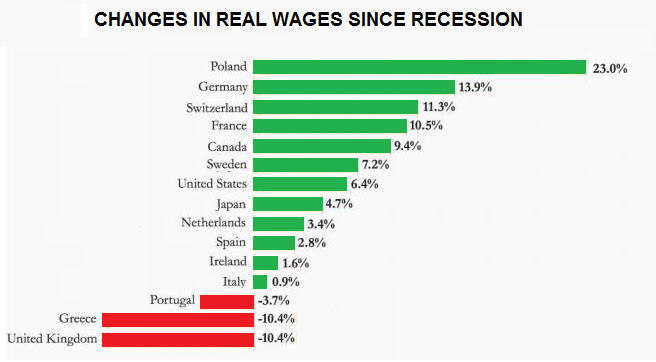 If you go to the link OECD Employment Outlook 2016 and scroll down to "country specific findings", there are more-detailed explanations for individual countries, and quarterly graphs starting with Q4 2007 normalized to 100.

In contrast to many other OECD countries, real wages have grown rapidly in Germany since 2011, being more than 14% higher at the end of 2015 than in 2007. This represents a partial unwinding of the considerable wage restraint that Germany experienced prior to the global financial crisis.

Average hourly real wages fell by more than 10% after 2007, and have only recovered slightly as the labour market strengthened in 2015. From April 2016, a new higher minimum wage rate applies for adults aged 25 and over.

9
Has freedom of movement of people lead to a reduction in wages and worsening of working conditions in the UK?
12
Are wages stagnant over the past 40 years in the USA?
37
Is this "fall of industrial production" graph accurate?
12
Does Great Britain have the lowest state pensions (relative to average wages) in the OECD?
82
As of February 2019, were US wages rising at the "fastest pace in decades"?
81
Does fossil fuels use since 1990 account for half of all the fossil fuels used in history?
9
Are farm bankruptcies in the US "at highs not seen since the Great Depression"?
1
Are these claims about the changes in the economy during Obama accurate?