ArsTechnica used a headline (and this has been reported elsewhere):

What is the evidence relating to the headline's claim?

This story is based on a sample of 77 astronauts and an animal model analogous to the radiation exposure felt when outside the earth's magnetosphere. 7 astronauts in the subsample of 44 who went to space got beyond the magnetosphere.

The basic answer is: we don't know. If you look at the original paper, you will find table 2, which shows that the number of people in the Apollo Lunar Astronauts group was 7 (n=7). Of those, 43% (or a total of 3) died from cardiovascular disease. In general you can't use such small sample sizes to draw conclusions in this sort of situation.

According to the paper's methods, they use the "Fisher’s exact probability test". However, this test assumes you know the totals of each measure beforehand. In this case, they don't (they don't know beforehand how many people would die from each cause), which renders the test results unreliable. They claim that the test is too conservative, which is controversial even according to the references they cite to support its use (41, 42, and 43). But they then use those references to justify using less strict confidence levels than is normally accepted for these tests (again according to those references). If they hadn't raised those confidence intervals, many of their results would be negative.

If the question is:

The answer is possibly, but the data is not rock-solid.

Otherwise, if you ask if the following is true:

This is a misreading of the original study, and is false strictly speaking, but is up for interpretation (see figure below)

The original scientific article (linked within the ArsTechnica article you link, is titled

It reports the following figure: 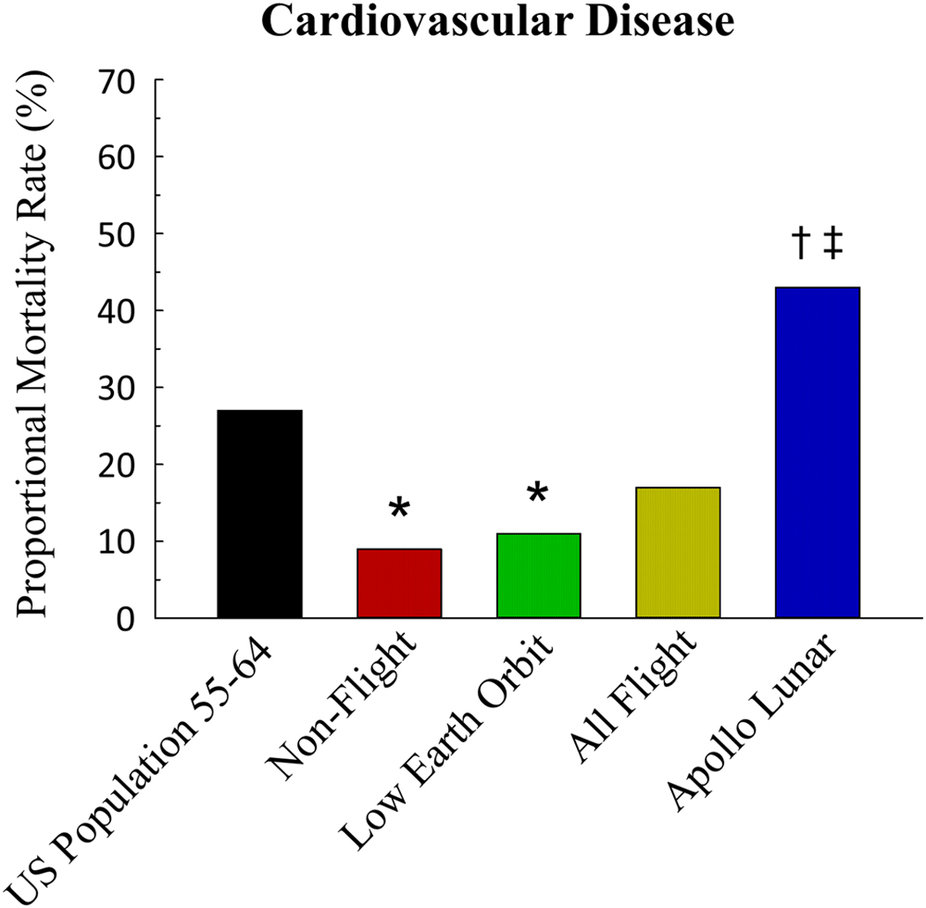 They then proceed with other analysis (that you can read at the link above), but already from here it can be seen that:

NOTE: the 4-5X ratio mentioned in the ArsTechnica title, is the one between Lunar astronauts and Non-flight/Low-Earth Orbit astronauts. It could be argued that Astronauts are a selected subset of "normal humans", thus making the title true, but a strict interpretation of the data provided does not confirm this.

ADDENDUM: to follow-up on the discussion in the comments, one could add the death of Edgar Mitchell to the Lunar group, making the bar drop from 43% to 37.5%, a 5.5% decrease that is about 2/3 the height of the non-flight group. This obviously affects the P values listed in the paper (but I am unable to re-compute them). It is also worth noting that 17 Lunar astronauts are still alive, and their future deaths might completely reverse the statistic cited above.

SEP. 2018 UPDATE: Since the writing of this answer, four more Lunar astronauts have died, Alan Bean, John Young, Richard F. Gordon Jr., and Gene Cernan.
The cause of death is specified only for John Young (complications from pneumonia), I am thus unable to update the computation of the mortality rate figure.

Some problems with that article...

A total of 30 astronauts traveled outside the magnetosphere of the earth: three astronauts on ten missions: Apollo 8, 10, 11, 12, 13, 14, 15, 16, and 17. Not all landed on the moon, but all traveled to the moon, outside of the earth's magnetic influence, which is the premise of the article.

The study used seven lunar orbit astronauts, as seven out of those thirty have died. So, not only is the pool small enough to be statistically suspect, other factors such as age of the astronaut are not being considered.

The Apollo astronauts are all very old now, and at an age where heart disease is not unusual, whereas the total pool of astronauts studied includes a high percentage of much younger people, as NASA hired a substantially higher number of astronauts for the large crews for the shuttles plus the much higher number of shuttle missions flown as compared to Mercury, Gemini and Apollo.

This list of astronauts, along with hiring dates, shows the preponderance of much younger non lunar astronauts in the study. During Apollo, there were about 20-25 active astronauts depending on who was retiring and who was being hired, while at the peak of the shuttle years, 2000, there were 109 active astronauts. Same holds true for actual flying astronauts: Apollo had a crew of three and flew 15 missions including spacelab, while the shuttle had a crew of 5-7, and flew over 120 missions. So the non lunar astronauts studied tend to be much younger than the lunar orbit astronauts, due to the simple fact that we haven't sent a crew to the moon since 1972.

This PDF was the most complete age related heart disease study I could find. It shows under one percent for under 40, around six percent for middle aged people, rising to around 20 percent for 60+, and 32% for 80 and older... the lunar orbit astronauts are all older than 60, and a few are around 80. That should have been a big factor in any such study. It is not considered in this one.

Also not considered is the untimely and premature deaths of 14 non moon mission astronauts, on Apollo 1, and the Challenger and Columbia disasters. Those deaths were not natural and not related to health conditions, so it can't be determined if any of them would also have suffered from heart disease had they not died in the losses of the spacecraft. As the total non lunar flying astronauts analyzed was 37, over one third of that study group died in those three accidents, which certainly would have thrown off any conclusions since the study was related to long term health effects of lunar (or further) space travel.

So to get back to the original question - are lunar astronauts dying of heart disease at a higher rate? It is impossible to determine from that rather shoddy piece of work.

Not the answer you're looking for? Browse other questions tagged epidemiology space-flight cardiology .

19
Does the presence of a cellphone affect sperm count or heart rate?
20
Does red meat increase the risk of heart disease?