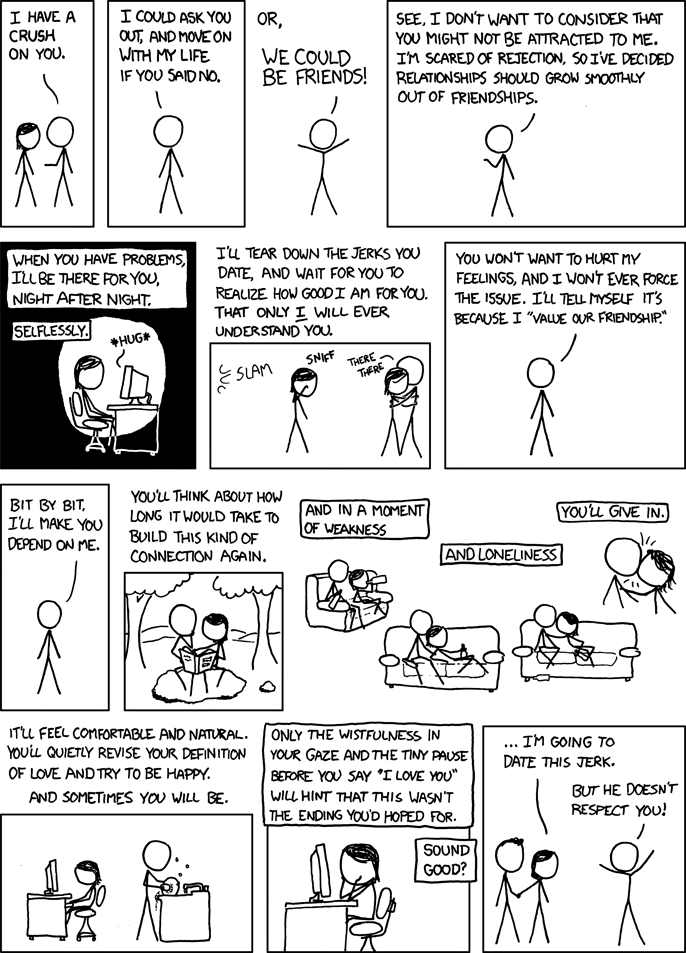 You might think this is something men parrot to justify their lack of luck with the ladies, but ask any androphile and we'll tell you there's just something about "bad boys" that drives us wild.

Apparently, there might be some scientific basis for this. ABC News reports on this study published in the European Journal of Personality:

Researchers at New Mexico State University in Las Cruces gave 200 college students personality tests to see how many of what psychologists call "dark triad traits" they possessed. These traits include callousness, impulsive behavior, extroversion, narcissism and various other anti-social traits for which "bad boys" are known.

"We would traditionally consider these dark triad traits to be adverse personality traits, and we think women would avoid these kinds of men, but what we show is counterintuitive -- that women are attracted to these bad boys and they do pretty well in terms of sheer numbers of sexual partners," Jonason explained. "They're taking quantity over quality as their sexual agenda, being serially monogamous and having multiple partners or one-night stands."

Yet, they say that doesn't translate into success with long-term relationships:

"The manipulative 'It's all about me, so tell 'em anything to get sex' behavior is likely to have more short-term sexual success," Worthington said. "A strategy of building trust and intimacy and commitment is, by nature, going to take longer. Thus, the payoffs are likely to be greater in the short term. However, long-term relationship survival is likely to be strongly disadvantaged in people with dark triad traits."

Unfortunately, the study only covers college students, so there's a possibility people "grow up" and start seeking better traits in their partners. A widespread study would be more convincing.

At any rate, the problem with "nice guys" might be their other traits, as Wikipedia indicates quoting this study published in the Journal of Sex & Marital Therapy:

"Some women offered flattering interpretations of the 'nice guy', characterizing him as committed, caring, and respectful of women. Some women, however, emphasized more negative aspects, considering the 'nice guy' to be boring, lacking confidence, and unattractive."

Is there a negative correlation between how kind one is and one's ability to find a partner? If so, could that be caused by factors other than their kindness?

Yes for short term, probably not for long term.

I think you somewhat answered this already, at least for short term mating/relationships (per Jonason). There does seem to be evidence that the "dark triad" personality provides an advantage when it comes to short term mating, but perhaps not for long term relationships.

We found that the scores on the Dark Triad traits were positively related to having more sex partners, an unrestricted sociosexuality and a greater preference for short-term mates. We demonstrated that the association between the Dark Triad composite was correlated with short-term mating above and beyond effects of participant’s age, sex and extraversion.

However, from the same report, we have this:

Whereas such a strategy capitalises on quantity at the cost of receiving long-term benefits, individuals who are not high on the Dark Triad traits—the majority of populations—may be better equipped to form cooperative long-term relationships and, to a lesser degree, short-term relationships without deception. This long-term, nonexploitive strategy may represent a slower but more stable approach to reproduction.

For this to work... there's at least some indication that dark rriad traits are enough to promote infidelity in a previously existing relationship... but we don't know if "nice guys" are the ones having their mates poached. In fact, the same study goes on to say:

Dark Triad individuals tend to have their own mates poached away by others.

This study finds that Machiavellianism (one of the dark triad traits) is negatively correlated with relationship intimacy (which I take to imply a lower long-term relationship satisfaction):

These individuals may go into relationships of any kind because of their own needs; the other individual may be immaterial or irrelevant. That is, the features of the other person are not the determining factors that lead to relationships emerging for those who are high on the Dark Triad. Instead, these individuals may “use” others to get what they want. We do not contend that these individuals are ambivalent to the attractiveness of their partners, but instead, their short-term mating lifestyle may be expressed in a “whatever I can get” attitude. However, this question does deserve future attention.

Lastly, this article suggests that women want primarily attractiveness for short-term mates, and both attractiveness and ambition (signaling genetic fitness and a good provider) for dating and long-term relationships:

A sample of 237 normally ovulating women viewed 36 or 40 videotaped men who were competing for a potential lunch date and then rated each man's attractiveness as a short-term and a long-term mate. As predicted, women's preference for men who displayed social presence and direct intrasexual competitiveness increased on high-fertility days relative to low-fertility days, but only in a short-term, not a long-term, mating context.

One would need the whole report to know what "social presence" and "intrasexual competitiveness" implies -- I'm reading this as dominating/confidence and attractiveness. Now quite the "dark triad" but perhaps related. At the very least we find that desires for "alpha" signals wane as relationship desires shift from short to long.

Summary: So, from your own sources and some I've provided, I'd put the results like so:

So, for long term strategies, it doesn't seem that dark triad high-scorers will fare as well. Across the board, attraction and ambition (or money) influence relationship partner choices a lot, and fertility and the type of mate (long vs. short term) will also affect what about a male is attractive.

Hope that doesn't cloud the water too much -- none of these provided quite what I hoped, but I think they are related enough to list as an answer.

37
Does sexual abuse lead to homosexuality?
48
Does child rearing by homosexual couples have any measurable negative effects?
46
Do opposite types in romantic relationships attract?
42
Do children who kill animals turn out to be violent?
27
Does staying married "for the kids' sake" benefit the kids?
10
Are confident guys more likely to get a girlfriend?