Do 42% of young muslims in France support suicide bombings?

In this youtube video, in the minute 2:20, the narrator gives some absurd-sounding statistics. After claiming that "21% of syrian migrants support ISIS", he says that "22% of young muslim migrants living in germany support suicide bombings". This comes along the following image titled "Muslim Support for Suicide Bombing": 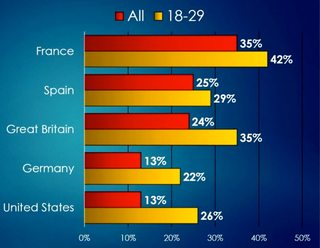 Is the data presented reliable?

Not the answer you're looking for? Browse other questions tagged religion islam terrorism .

11
Are Muslims allowed to deceive non-Muslims through a practice called Taqiyya?
97
Are there officially pronounced "no-go" Islamic zones in France?
6
Are Muslim headscarves banned in France?
11
Are five million Muslims marching on to Europe?
28
Is the number of Muslims correlated with terrorist attacks?
6
Did Sam Harris "argued that Muslims are driven to violent actions by their violent religion"?
16
Are Muslims 25 times more likely to commit terrorist attacks within the United States than non-Muslims?
8
Is this an old church being destroyed in France?
33
Did France kill millions of Muslims?