Are these statements about Trump accurate?

This image seems to be going around: 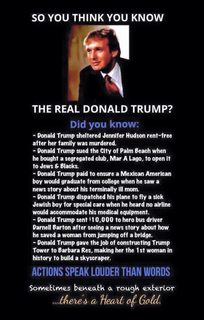 How accurate are these statements?

There is a snopes article about this graphic which I will use as basis for my answer. As it's not all properly sourced I'll add my own sources as well if necessary.

The claims themselves are mostly true. If this represents the "real Donald Trump" or if Donald Trump actually has a "Heart of Gold" is up for interpretation. Many of the claims happened decades ago, and some benefit Trump himself either directly or indirectly by improving his public image.

There are at least two sources for this: Donald Trump himself in a People interview and Dana London - who worked for Trump.

Donald Trump sued the City of Palm Beach when he bought a segregated club, Mar A Lago, to open it to Jews and Blacks.

According to the Washington Post Mar A Lago wasn't a segregated club, but a private estate. It is however true that membership is open to Jews and Black people (who can afford the initial cost of 100k$ and 14k$ annually).

According to the Washington Post, Trump did not sue the City of Palm Beach because it would not allow him to grant membership access to Jews and Black people, but because Trump thought that the City was discriminating against the club because of this policy.

Snopes also suggests that this was mainly a business decision.

Donald Trump paid to ensure a Mexican American boy would graduate from college when he saw a news story about his terminally ill mom.

Snopes thinks that this is about the son of Melissa Young. If this is the case, Trump did promote the case, but there is no evidence that he actually donated any money himself.

Donald Trump dispatched his plane to fly a sick Jewish boy for special care when he heard no airline would accommodate his medical equipment.

This is true, see eg here or here.

Donald Trump sent $10,000 to hero bus driver Darnell Barton after seeing a news story about how he saved a woman from jumping off a bridge.

This is true, see eg The Buffalo News.

Donald Trump gave the job of constructing Trump Tower to Barbara Res, making her the 1st woman in history to build a skyscraper.

This is true, see eg a statement by Res in the NY Daily News. She herself ends her statement with: "Donald Trump is not great for women and therefore not right for the United States".

13
Did Trump publicly out Jeffrey Epstein as a pedophile in 2002?
4
Did Trump fight against racial segregation at his golf resort?

25
Did Donald Trump only tell the truth in 22% of his fact-checked statements?
64
How accurate are these nine charts of the economy under the Obama Administration?
1
Are these figures about sexual harassment by Trump, O'Reilly, Ailes and Obama correct?
3
Are the statements attributed to Donald Trump and his sons about Russian connections accurately quoted?
88
Has the Trump administration revoked these listed LGBT protections?
1
Are these claims about the changes in the economy during Obama accurate?