Can ants lift 50 times their weight? 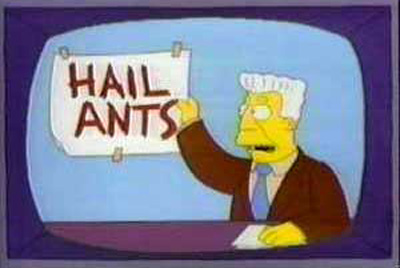 I've encountered this one many times over the years, mostly in those "useless facts" books and sites such as the one here.

In fact, it's been one of those bits of trivia I seem to have unconsciously taken for granted as true, probably due to the sheer number of times I've heard it. It occurred to me though that while I've often heard the claim stated, I've never seen it proven.

Has it been scientifically proven that ants are capable of lifting 50 times their weight?

biology entomology
Share
Improve this question
asked May 21 '11 at 2:53 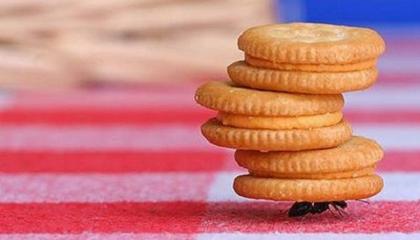 Rex Kerr's answer has linked to photographic evidence of an Asian Weaver ant lifting 100 times its bodyweight (no, it's not the one above).

To me the amazing thing is that the ant is actually clinging upside-down to a smooth surface while lifting that 500mg weight: 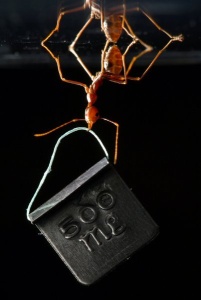 ants are actually not stronger than humans.

The reason why ants can lift so much is due to scaling, meaning it has to do with math, not muscles.

The strength of a muscle scales with the cross-sectional area. (Exercise makes a muscle bigger, but not longer)

This means, the strength of an organism increases as the square of the scale factor.

The mass of an object depends on its volume. 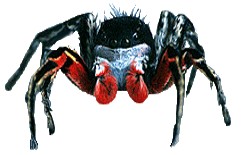 The spider on the right is 3x the size of the small spider, but it weighs 27x as much. 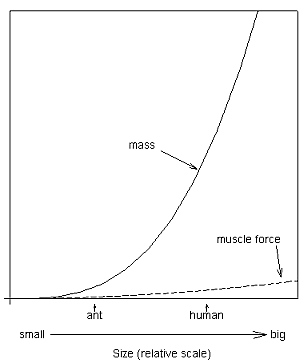 So, if an ant would be human size it wouldn't be able to lift 100x its bodyweight anymore.

Or going the other way, playing "Honey I Shrunk the Kids": 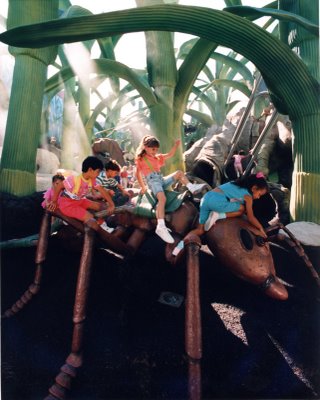 ant size humans would be as strong as ants.

These sorts of feats of strength are not very useful, though, even if they are possible, just like humans don't routinely lift the kinds of weights that champion weightlifters do.

Leafcutter ants, who specialize in cutting leaves and carrying the loads back to their nest are probably the most heavily studied load-carriers; they will tend to carry only a few times their body weight. For example, see Roces and Hölldobler, "Leaf density and a trade-off between load-size selection and recruitment behavior in the ant Atta cephalotes". Oecologia Volume 97, Number 1, pp. 1-8 (1994), Figure 2A, where the 4 mg ants cutting 0.22 mg/mm2 leaves cut about 60 mm2, which gives about 13 mg for a 4 mg ant (3x body weight).

Not the answer you're looking for? Browse other questions tagged biology entomology .

51
Do people need to drink 8 glasses of water a day?
35
Can you put on more weight than what you eat?
12
Is the total biomass of ants roughly equal to the total biomass of humans?
3
Are ants afraid of the smell of lemon?
8
Are ants afraid of chalk and won't cross a chalk line?
9
Can the rhinoceros beetle carry 100x its own weight?
20
Does flour or rice make an ant's stomach explode?
15
Are artificial sweeteners useful as insecticides against ants?
14
Can a person lose weight by being cold?