After stumbling upon a video of a guy getting knocked down in one hit, I did some quick research and couldn't conclude if this is a myth or not. The video in itself is very a compelling evidence for fact.

Often we see it used as a plot resource in movies, when someone knocks the other person unconscious by hitting their head. Sometimes not even very hard. And we do see people get knocked out in real tv as well, although they often hide the technical details.

I've also heard / read to actually manage to knock someone unconscious in reality, a very strong hit with Traumatic brain injury must be caused, potentially leaving scars on the brain.

So, what's the verdict?

Hopefuly we wouldn't need a scientific research to come up with a conclussion (phun intended)... I mean, there must be enough statistics about this just from sports or hospitals already! :)

In movies, knocking someone unconscious can look like this:

It can be a PG-13 way to take care of a bad guy, who wakes up sometime later with only a headache. (However, more realistic depictions can be found, usually in war movies.) 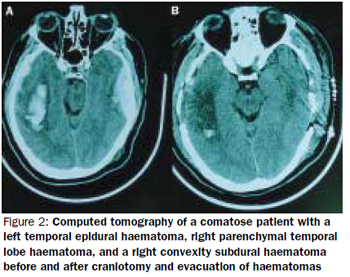 What isn't shown is that in reality a person knocked unconscious is usually knocked out only for a few seconds, minutes at most.

If a person is knocked out for longer than that, this may indicate severe brain damage, which could lead to loss of function, life-long debilitation, coma, and death. Essentially, a blow hard enough to knock a person unconscious is classified as a Traumatic Brain Injury (TBI). Since most guards,henchmen,etc.in movies are knocked out for extended periods of time, it quite possible that they may suffer severe brain damage.

So, knocking someone unconscious by hitting them in the head is clearly not as practical or consequence-free as tv and movies might lead one to believe.

The most common causes of being knocked unconscious are related to either falls or vehicle crashes. However, direct trauma to the head is another cause, the CDC lists assault as accounting for 10% of reported cases. (Fact: Chuck Norris is responsible for 9.7%)

In reality, TBI consists of more than just the initial impact.

The main thing to keep in mind is:

Although TBI is a problem of major medical and socioeconomic significance, its pathogenesis is incompletely understood, and it is often difficult to reconstruct the events leading to the primary and secondary lesions of varying severity and regional distribution that constitute TBI source

This means that while there are some general aspects and theories we can apply broadly to patients with TBI, it is by no means a cut-and-dry phenomenon, and individual cases show great variation.

At the time of the initial impact, the brain is injured in two places, the place of the impact and the side opposite the place of impact. This happens because the brain is surrounded by fluid and can be moved if if enough force is applied.

In movies, it is this intial impact which renders the victim unconscious, however in reality, this is not always the case.

In reality, the person may not be rendered unconscious by the primary injury. However, they may become unconscious later due to the secondary injuries. Secondary injuries are typically caused by bleeding or swelling within the skull which compresses the brain.

The principal mechanisms of TBI are classified as (a) focal brain damage due to contact injury types resulting in contusion, laceration, and intracranial haemorrhage or (b) diffuse brain damage due to acceleration/deceleration injury types resulting in diffuse axonal injury or brain swelling.2404649 Outcome from head injury is determined by two substantially different mechanisms/stages: (a) the primary insult (primary damage, mechanical damage) occurring at the moment of impact. In treatment terms, this type of injury is exclusively sensitive to preventive but not therapeutic measures. (b) The secondary insult (secondary damage, delayed non-mechanical damage) represents consecutive pathological processes initiated at the moment of injury with delayed clinical presentation. Cerebral ischaemia and intracranial hypertension refer to secondary insults and, in treatment terms, these types of injury are sensitive to therapeutic interventions. source

Some common occurrences in head injuries:

The word "concussion" has many different meanings to patients, families, and physicians. One definition:a condition in which there is a traumatically induced alteration in mental status, with or without an associated loss of consciousness (LOC).

A broader definition for concussion: A traumatically induced physiologic disruption in brain function that is manifest by LOC, memory loss, alteration of mental state or personality, or focal neurologic deficits.

While there are many individual variations, concussions usually result in relatively temporary impairment of neurologic function

Again, things are not so clear cut when dealing with concussions, and post-concussion syndromes:

Post concussive syndrome (PCS), a sequela of minor head injury (MHI), has been a much-debated topic. Muddled by conflicting findings regarding symptom duration, an absence of objective neurologic findings, inconsistencies in presentation, poorly understood etiology, and significant methodologic problems in the literature, postconcussive syndrome (PCS) remains controversial. Depending on the definition and the population examined, 29-90% of patients experience postconcussive symptoms shortly after the traumatic insult.source(medscape link)

(One symptom of concussions is nausea/vomiting which you don't see in movies too often.)

A hematoma is a swelling of blood confined to an organ or tissue, caused by hemorrhaging from a break in one or more blood vessels. As a cerebral hematoma grows, it damages or kills the surrounding brain tissue by compressing it and restricting its blood supply, producing the symptoms of stroke. The hematoma eventually stops growing as the blood clots, the pressure cuts off its blood supply, or both. source

They are classified from small to massive depending on diameter and volume. Effects vary according to size and location. 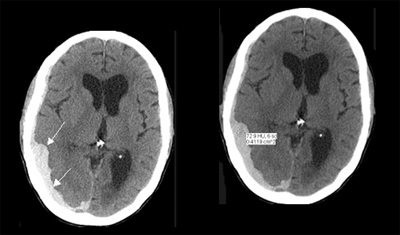 White arrows are pointing to the hematoma. 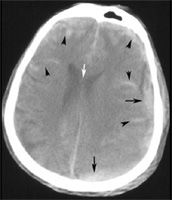 Black arrows point to subdural bleeding White arrow points to the midline shift of the brain.
The build-up of blood in the skull is putting extensive pressure on the brain. Enough bleeding will essentially "crush" the brain, causing the brainstem to herniate.

Diffuse Axonal Injury Basically this is extensive damage to the white matter. 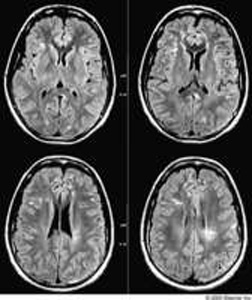 Diffuse axonal injury is one of the most important types of brain damage that can occur as a result of non-missile head injury. Increasing experience with fatal non-missile head injury in man has allowed the identification of three grades of diffuse axonal injury. In grade 1 there is histological evidence of axonal injury in the white matter of the cerebral hemispheres, the corpus callosum, the brain stem and, less commonly, the cerebellum; in grade 2 there is also a focal lesion in the corpus callosum; and in grade 3 there is in addition a focal lesion in the dorsolateral quadrant or quadrants of the rostral brain stem. source

Diffuse axonal injuries can occur at the time of the initial impact, or develop during the minutes or hours after the injury.

Length of time unconscious correllates to severity of the brain injury

Post-traumatic amnesia(PTA) is defined as the time from the initial injury until the patient can demonstrate conscious memory of what is going on around him/her.

The duration of PTA was the best predictor of outcome selected in this model for all endpoints and elements of the physical examination provided additional predictive value. source (medscape link)

Age is also a factor in predicting outcome...

I see two questions here: "How hard is it to knock someone out with a single blow?" and "Is doing so likely to cause long-term brain damage?". The first question is tough to quantify but I did find some relevant research.

How hard is it to knock someone out with a single blow?

This study had Olympic boxers throw (gloved) punches at modified crash test dummies and measured the resultant forces of impact. These measurements were compared to head injury risk thresholds previously established in NFL studies. Linear forces were not judged sufficient to produce concussion, however average rotational acceleration was comparable to the NFL thresholds. So a single punch by an Olympic-caliber boxer was shown to be at least capable of producing concussion. Note that only a minority of concussions lead to loss of consciousness (LOC). Thus it seems an exceptional blow would be required for a one-punch KO.

Also, there is a controversial theory in some martial arts circles that a sharp, well-placed blow to the corner of the jaw (much as in the video linked in the question) may activate the baroreceptors in the carotid sinus, causing rapid reflexive drop in blood pressure and LOC. While the mechanism is at least semi-plausible, as far as I can tell it has never been demonstrated in practice. That claim might be worthy of its own question.

Is a one-punch knockout likely to cause long-term brain damage?

Amateur boxing medical guidelines say that any boxer rendered unconscious should immediately be brought to an emergency department for evaluation. The boxer shouldn't return to competition until a minimum of 28 days have passed and they've been cleared by a neurologist.

Anyone who experiences LOC after a blow to the head has at least mild traumatic brain injury (MTBI) by definition. According to this article,

Patients who are symptomatic after MTBI generally recover over a 3-month period in terms of ability to perform well on neuropsychological measures and ability to return to work despite the possible persistence of minor symptoms. It has been shown that focal parenchymal lesions on MRI scans of the brain resolve within 1 to 3 months and that these changes are paralleled by improvement in performances on neuropsychological tests and resumption of previous routine activities.

The 10% to 15% of patients who are still symptomatic 1 year after injury ... are at high risk for emotional and cognitive disabilities that may involve the inability to carry out ordinary daily activities and work responsibilities and to maintain important social relationships.

In summary, yes, a head impact resulting in LOC is a much more serious injury than is portrayed in the movies, but won't necessarily lead to permanent damage.

Not the answer you're looking for? Browse other questions tagged medical-science physiology sport .

78
Is it possible to "die instantly"?
37
Does one remain conscious after decapitation?
10
Is there one (and only one) endurance sport in which women outperform men?
16
Is it possible to stick a nail into your nose?
10
Did Kim Jong-il Score 11 holes in one in golf?
6
Does neck-strengthening exercise prevent knockouts in boxing?
13
Are Aikido joint locks harmful to children?
1
Are artificial football pitches linked to cancer?
15
Is it possible to cause a skin burn by telling a hypnotized subject they are touching a hot object?