Do 1.5 million children die from pollution? 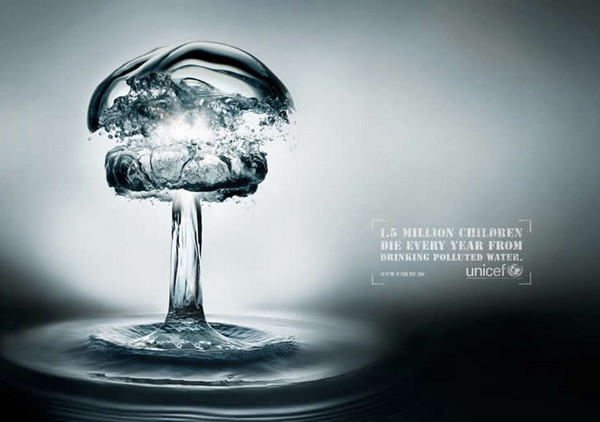 Is that really true?

It looks like the statistic comes from a UNICEF report:

It is estimated that unsafe water and a lack of basic sanitation and hygiene every year claim the lives of more than 1.5 million children under five years old from diarrhoea.

Note that this statistic is different. It's not just "polluted" water but also lack of basic sanitation and hygiene. This would also include things like not washing one's hands after going to the bathroom.

Many of us in the developed world may find the claim here confusing. From the image:

When I see the word polluted, I am thinking about industrial waste. That doesn't seem to be the issue here. UNICEF is concerned more about water mixed with sewage and the lack of water leading to unsanitary habits.

This is a real statistic, but somewhat misleadingly paraphrased. Many readers will naturally expect it to mean something entirely different from what it is claiming. It's saying that 1.5 million children, mostly in developing countries, die from complications related to a lack of a clean water supply. The way it is framed though, it sounds like 1.5 million children are dying from industrial waste. But the report makes no mention of industrial waste. It's talking about a lack of water treatment plants (before use) and sewage treatment plants (after use).

1.5 million children die every year from drinking polluted water. Is that really true?

If one considers drinking water tainted with human and animal feces to be "polluted" (and how can one not do so), this was true a decade ago, and was significantly worse a decade before that. This 1997 New York Times article put the death toll from unsafe drinking water at 3.1 million people annually, almost all of them children. This 2006 UNICEF report put the death toll at 1.5 million children annually.

These stark numbers have been reduced considerable by simple measures such as education and making cheap oral rehydration therapy readily available in the underdeveloped and developing world. The current rate is about 80000 per year, per the Center for Disease Control. Making the drinking water itself safe would be a much more expensive undertaking.

Not the answer you're looking for? Browse other questions tagged environmental-health .

6
Is tap water unsafe to drink even when it comes from a clean water supply?
16
Does consuming fluoridated water reduce IQ?
4
Does "hard water" cause eczema?
6
Is Giardiasis a significant risk of drinking untreated water in pristine backcountry areas in North America?
6
Is drinking water stored in copper vessels (copperware) good for your health?
68
Is there plastic microfiber in 83% of tap water?
4
Is air pollution reaching a crisis point?
20
Do more people drown in deserts than die of thirst?