Do 60% of Americans believe a third major political party is needed?

Gary Johnson, the Libertarian party nominee for President, posted this image to his official Facebook page: 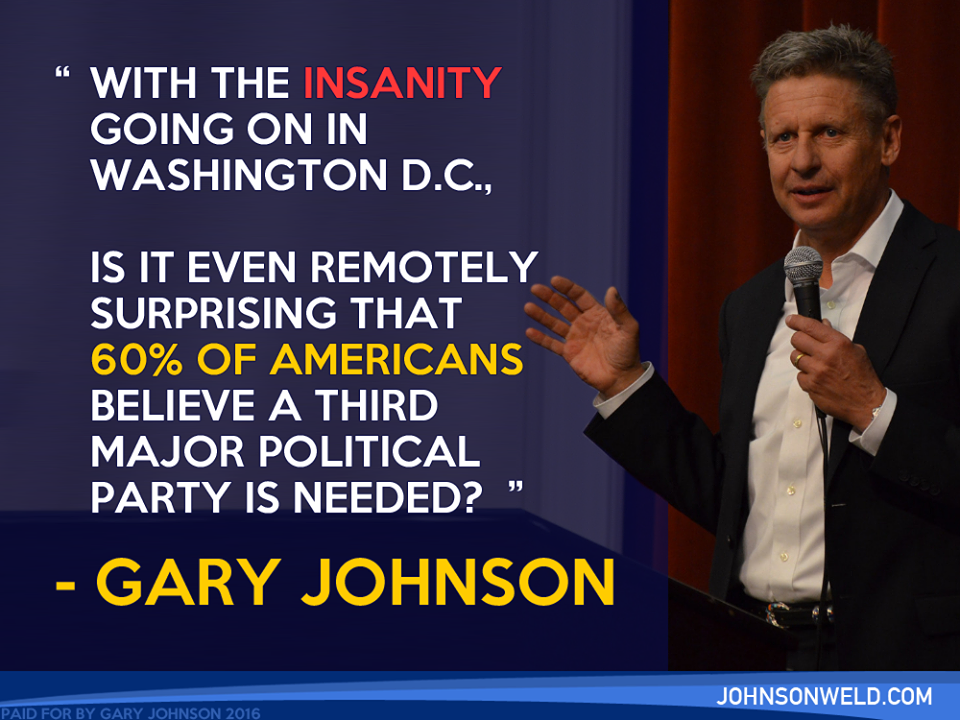 The text of it reads:

With the insanity going on in Washington DC, is it even remotely surprising that 60% of Americans believe a third major political party is needed?
- Gary Johnson on Facebook

Is this true? Do 60% of Americans believe that a third major political party is needed? (If this was based on a poll, I'd also be interested in its methodology.)

Of all the polls I looked at, the one most closely matching this claim is one long-running Gallup poll: Majority in U.S. Maintain Need for Third Major Party. 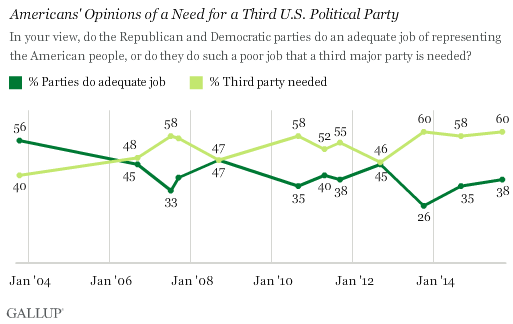 "In your view, do the Republicans and the Democratic parties do an adequate job of representing the American people, or do they do such a poor job that a third major party is needed?"

Participants could also answer "no opinion". This polling question has been asked annually since 2003.

They described their methodology:

Results for this Gallup poll are based on telephone interviews conducted Sept. 9-13, 2015, on the Gallup U.S. Daily survey, with a random sample of 1,025 adults, aged 18 and older, living in all 50 U.S. states and the District of Columbia. For results based on the total sample of national adults, the margin of sampling error is ±4 percentage points at the 95% confidence level. All reported margins of sampling error include computed design effects for weighting.

This is consistent with other polls in Gallup's Social Series polls.

question wording [...] can introduce error or bias into the findings of public opinion polls

That same question was used by the Public Policy Institute of California without any change or criticism in a 2013 survey (p. 21). Their results (specific to California) had 49% for a "third major party needed", 13% "don't know", and 37% "existing parties adequate job" (my paraphrasing).

Do the two major parties – Democrat & Republican - do a good job of representing Americans’ political views, or do you think a third party or multiple parties is necessary?

10
Do 4% of Americans say they believe in "lizard people"?
9
In 2014, did nearly half of all Americans believe in Creationism?
41
Do 26% of Americans believe the sun revolves around the Earth?
2
Did 50% Americans believe "the movie and television industries are pretty much run by Jews" in 1964?
28
Did non-voters outnumber the supporters of each political party in the UK in 2010?
68
Are one-third of Americans 'killed by strangers' killed by police?
76
Did COVID-19 take the lives of 3,100 Americans in a single day, making it the third deadliest day in American history?