Did Martin Schulz say that it is not the EU philosophy that the crowd can decide its fate?

In the last few days, some people are attributing to European Parliament President Martin Schulz the following statement:

The British have violated the rules. It is not the EU philosophy that the crowd can decide its fate.

Did he really say that, or something roughly like that? I couldn't find a source that doesn't eventually point to someone on twitter asserting he said it.

The origin of the quote is a German satirical article from Contra Magazin. 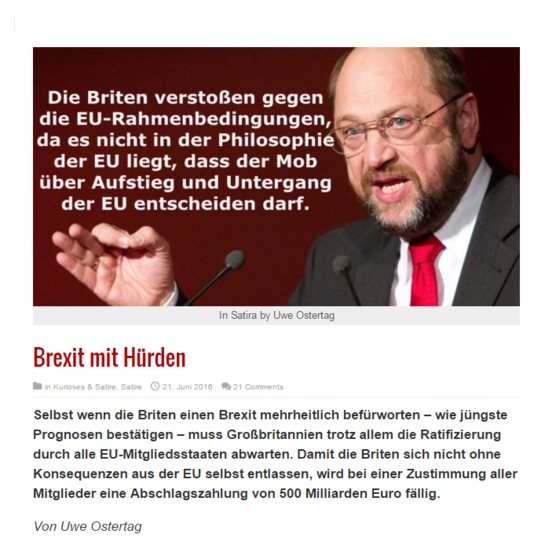 Translation by leftaroundabout in the comments:

The British are violating the foundational conditions of the EU, for it is not part of its philosophy that the mob gets to decide whether the EU shall rise or fall.

The quote is clearly fictional, as stated in the legend of the picture (In Satira), and at the end of the article (Achtung Satire!)

To find the source of this quote, Le Monde journalists retraced the path it took. They started with the Finance blog Zero Hedge, which made an article about how undemocratic the EU is. The trail then leads to a few Twitter accounts (in order Tale of Two Treaties, Giovanni Zibordi and Professor Werner). Finally, Professor Werner quotes the original article from Contra Magazin.

The article from Le Monde also contains screenshots of the relevant tweets.

Not the answer you're looking for? Browse other questions tagged politics quotes europe brexit .

24
Did Martin Luther King, Jr. say that "I will not rejoice in the death of one, not even an enemy"?
6
Did Richard Feynman say "Philosophy of science is about as useful to scientists as ornithology is to birds."
12
Did Comey say that Trump did not try to obstruct justice?
94
Will the 2019 EU Directive on Copyright in the Digital Single Market ban memes?
25
Do (non-British) EU citizens make up 95% of the veterinary workforce in UK food production?
5
Did Lord Kelvin say "If you can not measure it, you can not improve it"?
16
Did Martin Luther King Jr. say "Do you know that Negroes are 10 percent of the population of St. Louis and are responsible for 58% of its crimes?"
29
Did Bercow say he would have sent the EU extension-request letter himself, had Johnson not done so?
74
Did Trump order tear gas to be used on protesters to clear a pathway to a church for a photoshot?