I saw a friend "like" this news article on Facebook which claims that phytoplankton would stop oxygen production:

"If the world’s oceans warmed by 6 degrees Celsius—a realistic possibility if global emissions continue unabated—the tiny plants would halt oxygen production, according to the study, which was published Tuesday in the Bulletin of Mathematical Biology."

Of course, the article writer didn't include a link to the study, or even the name of the study and Google is not forthcoming.

The full name is "Mathematical Modelling of Plankton–Oxygen Dynamics Under the Climate Change", it was written by Yadigar Sekerci and Sergei Petrovskii and published in Bulletin of Mathematical Biology December 2015, Volume 77, Issue 12, pp 2325-2353.

The journal seems to be credible, and the article seems to be peer-reviewed. So the results of the paper are likely to be quite scientific and in that sense truth. You might be able to find out more about the credibility of the journal ac Academia.SE, but since my university lists it as credible journal and offers access I'd say the journal is credible.

This, however, does not necessarily mean the article is correct. Its seems to be peer-reviewed, but not completely without controversy.

The study answers your points:

This contribution appears to be massive: It is estimated that about 70% of the Earth atmospheric oxygen is produced by the ocean phytoplankton (Harris 1986; Moss 2009).

It is well known that the water temperature has a notable effect on the phytoplankton growth (Andersson et al. 1994; Eppley 1972; Raven and Geider 1988).

These references are quite old. So I would consider these things as well-understood and credible.

So there is a definite yes to 1., this is simply true. As for 2., they are sensitive to temperature change, but how much? In the end, the study has the following conclusion:

We then considered the dynamics of the corresponding nonautonomous system where the oxygen production rate slowly changes with time to take into account the increase in the water temperature due to the climate change. We showed that a sufficiently large increase or decrease in the production rate results is a bifurcation leading to a sudden depletion of oxygen and plankton extinction.

So yes, the effect is drastic. The Figure of 6° is also given:

Even if the current state of the system is safe, a sufficiently large warming (roughly estimated as 5–6 ◦C, see Robinson 2000) would inevitably lead to an ecological disaster resulting in a complete depletion of oxygen.

So all in all, the most of the claims made in the news article are really made in that study.

tl;dr- The cited study's completely unscientific, and its authors have denounced it in a new paper. Their new paper's junk, too, but at least they seem to have learned their lesson about making doomsday predictions.

The original study was

and their new study's

The new study has this to say of the original one:

Admittedly, the apocalyptic prediction of the global oxygen depletion remains hypothetical as it was made in a theoretical study based on a rather simple, albeit general, mathematical model. More research is required before this could be accepted as a well established scientific fact.

So, the original authors don't stand by this claim. They're being excessively generous in describing their prior paper as "theoretical", but at least they've conceded that it's "hypothetical".

The original study was indefensible. They literally picked vastly oversimplified equations, kinda like trying to do a large quantum mechanical model with a linear regression, and then literally guessed values for their constants based on what seemed easiest. Then, when the equations crashed, they described it as predicting doomsday.

As described in an observer's blog:

There is also the 'extreme-warmer' view, that the effects of CO2 will be so large as to 'fry the planet', leading to the extinction of humans, and perhaps all life, which is surprisingly common among the general public, despite being utterly implausible. Of course, they are encouraged in this belief by alarmist papers such as 'Mathematical Modelling of Plankton–Oxygen Dynamics Under the Climate Change' by Sekerci and Petrovskii, who apparently don’t understand that any arbitrary system of differential equations has a good chance of producing unstable behaviour, and that calling such a system a 'model of a coupled plankton–oxygen dynamics' does not make it a good model. It is very, very unlikely that life on earth would have lasted for over three billion years if the global ecosystem were really as unstable as is suggested in this paper.

Regarding their new study

The new study's highlights are:

The "parameters" referred to in

Sustainable oxygen production is only possible within a relatively narrow parameter range.

are their guessed values. What this means is that they don't have real data or anything like that, but rather they're making up numbers, and most of their numbers result in the equations crashing (non-"[s]ustainable oxygen production").

So, their strategy's to keep guessing numbers 'til their equations stop crashing, the range of which constitutes the "relatively narrow parameter range".

Then, how does global warming affect that? They have no idea. In fact, any slight cooling or warming can throw off those parameters again. Alternatively, they could select parameters that're stable for extreme global warming, in which case their equations would predict that global warming is necessary to save the world.

This section's to provide further explanation of the original study, and some of the content's a tad technical. 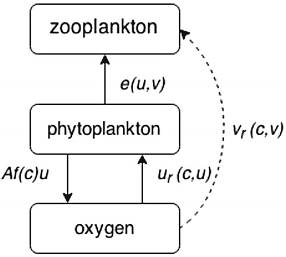 Equations (13–15) then turn into the following:

Of course, these equations are vastly too simplistic such that the results'll often be absurd. Still, the authors want the results to seem reasonable, so they do a steady-state analysis to try to get the equations to predict stability.

We now proceed to the analysis of the equilibria of the full system (19–21). Obviously, the steady state values are the solutions of the following equations:

Finally, after finding a few fake values that they like, they then just pick those values as-if they were real.

Anyway, since their equations usually blow up and they made-up fake values that just barely hold together, then whenever they change things a bit, the equations blow up again. And so, the authors report doomsday.

Re your second question: 'yes' and 'sort of'

Yes. About 40% of phytoplankton populations have already been lost over the past 50 years with only a half a degree mean global temp increase. Ref: https://www.scientificamerican.com/article/phytoplankton-population/

12
Could global warming lead to an oxygen shortage by 2100?
15
Whose account of the response to Michael Mann's original "hockey stick" analysis is correct?
5
Are individuals with severe mental illness "much more likely" to be victims than perpetrators of violence?