Did the UK slip to sixth largest world economy from fifth, less than 24 hours after the EU referendum vote?

Some news sources have reported that in the 24 hours after the UK's results on the EU referendum came through, the UK dropped from 5th largest economy in the world, to 6th, being overtaken by France.

For example, this headline in the Metro:

Overnight the UK economy has already slumped from the fifth largest in the world to sixth.

And another, this from the pro-Brexit Daily Express:

FRANCE has overtaken the UK as the world's fifth largest economy... economists say Britain has dropped into sixth place in the wake of a vote for Brexit

This has also circulated widely on social media, but doesn't seem to have been picked up by more "official" sources.

It's impossible to definitively prove: GDP is calculated annually, and compared based on purchasing power, rather than currency fluctuations - countries can't officially change position like this overnight. But the UK's status as 5th largest economy is certainly in doubt.

At least one estimate, detailed below, based on applying currency fluctuations to previous GDP figures, suggests that the UK may have dipped below France for 15-20 minutes in the 24 hours after the referendum, then recovered, then dropped back down again, stabilising at a point that would suggest the UK is now below France; but this is a very crude methodology (it doesn't take into account changes in economic activity since 2015 or differences between currency value and purchasing power), so it's not possible to use this method to say that the countries' positions have definitely changed.

Here's an example of how the BBC are talking about this uncertain status of the UK economy, from a recent article Nick Robinson of the BBC, describing the UK as:

...what was until last week the fifth largest economy in the world

City AM, a UK newspaper aimed at the financial industry, published some calculations to see if any case can be made that at any point the two economies could be argued to have crossed:

Obviously, when you come to compare the two, you need to use a common currency. That could mean converting the UK's from sterling to euros. In doing so, the pound would need to be worth less than €1.21 for the UK to be smaller than the French economy.

They emphasise that this isn't a standard or advisable way of comparing GDP...

Economists generally prefer to use purchasing power parity (PPP), which adjusts exchange rates to make comparisons between two countries based on their purchasing power. That is calculated by comparing how much it costs to buy a basket of goods in one country with the same costs of buying that basket of goods in another. It was designed specifically to rule out making comparisons of things like GDP based on market exchange rates.

...and conclude that the claim is not true, and could at best be argued as true:

for 20 minutes and using a dodgy calculation

However, since this article was published, the pound has dipped further and somewhat stabilised below €1.21. Here's a 3-day chart from the Financial Times, which matches data from Bloomberg. This doesn't prove that France is now above the UK, due to the methodolical limitations, it's merely suggestive: 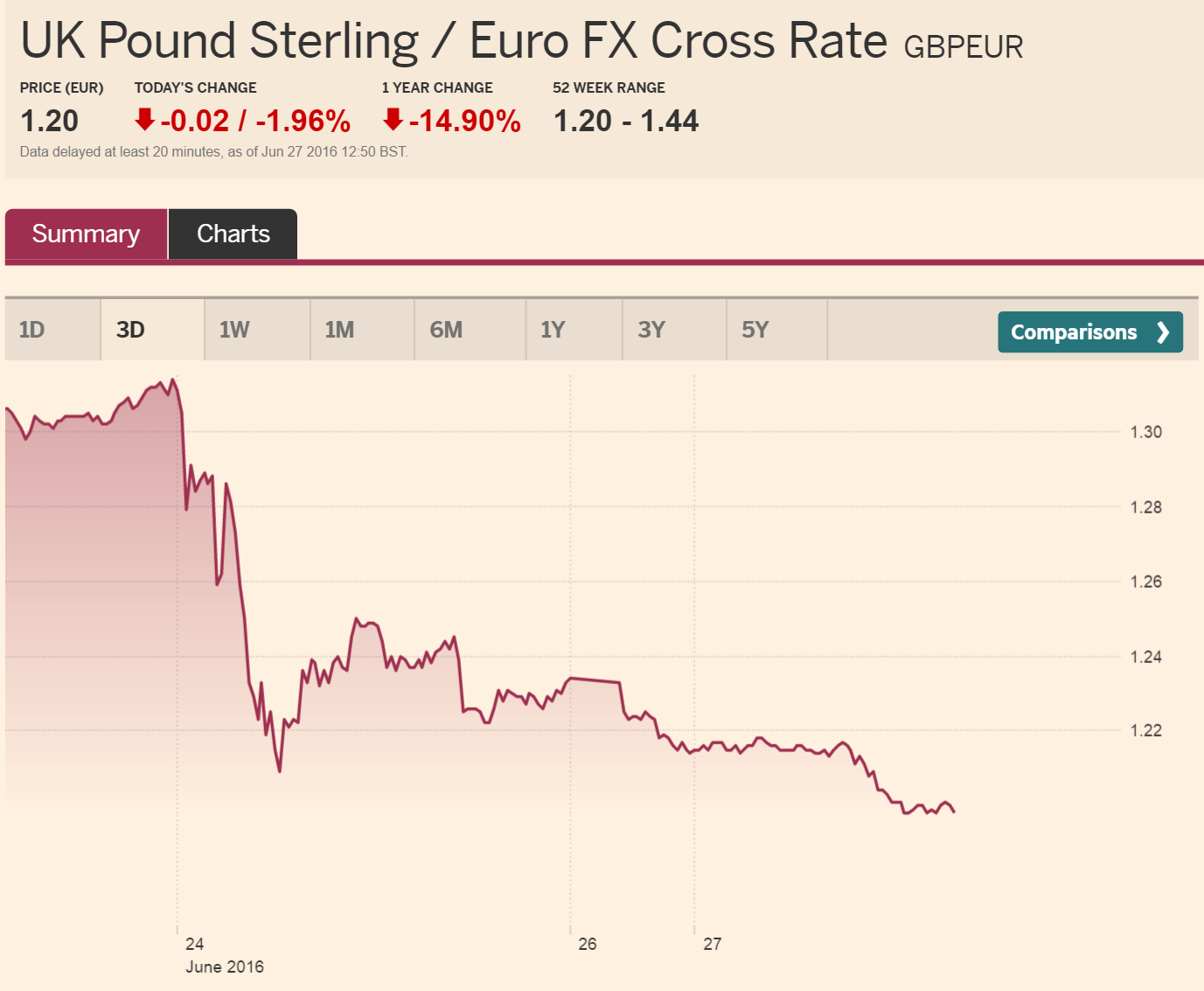 The Independent, a UK newspaper who supported the Remain campaign and so might be expected to favour a story emphasising negative economic impacts of the vote, have also analysed the claim and concluded that it's based on unreliable non-standard comparisons:

...the size of an economy is not measured in real time in the way that currencies and company share prices are.

We have an estimate of UK GDP up to the end of the first quarter (the end of March) of 2016 from the Office for National Statistics. And the French statistics agency data up to the same point.

...But does a single quarter of output represent the size of an economy in any case? Usually, these things are measured by looking at a year’s output or GDP.

“[UK and France GDP in 2015 had] a difference of almost 18 per cent” Mr Goodwin says “so while they may have very briefly crossed this morning when sterling reached its 31-year low (though I’m not sure they actually did), sterling’s subsequent rally means it certainly won’t be the case now. And that’s before we get onto whether converting at market exchange rates is an appropriate thing to do!

They elaborate on that last point:

The major fall in sterling will hurt UK living standards because the price of imports will rise. But we should resist the urge, however politically tempting, to use currency swings to make GDP comparisons that are inherently dubious

Basically, we don't know. We can't yet prove it dropped to be the sixth largest, but we can't say with any confidence that it remained the fifth largest. All we can be sure about is, like how the BBC put it above: It's the economy formerly known as the fifth largest.

The French newspaper Le Monde (generally considered to be the French newspaper of record) ran an article¹ on this topic in their data analysis (“Les Décodeurs”) section. Their verdict is FALSE (but the real takeway is “wait and see”).

Here are the conclusions of the article:

¹ Currently public but may become subscriber-only in the future.

Economy size is most frequently measured in terms of GDP: absolute value, per capita, PPP, or a combination of thereof. Let's take a look a the definition of what GDP really is:

Gross domestic product (GDP) is a monetary measure of the market value of all final goods and services produced in a period (quarterly or yearly).

Any goods and services produced before the referendum have already taken an effect on the GDP, regardless of the future EUR-to-GBP ratio. Therefore we can only apply the decreased exchange rate to economic output after June 23rd, which is only 1/365th of the year for a period of "less than 24 hours". Assuming the daily economic output (in GBP) of the UK will stay exactly the same as in 2015, it's impossible for the British economy to have slumped by more than 1/365 as a result of Brexit (as of the time when the articles were published).

To take an extreme example, imagine a hypothetical country called Goldlandia which produces exactly 1 ton of gold on the first day of each year, adding 1 billion Guldens (or 10 billion Euros) to their GDP, and then produces nothing else. Suddenly an economic crisis hits Goldlandia in June 2016 and their exchange rate is decreased by a factor of 100. Does this mean their 2016 GDP will also decrease by a factor of 100 in Euros? No, because they've already produced a ton of gold (adding 10 billion Euros of economic activity) on the 1st day of the year, and any subsequent changes won't affect that.

Therefore the answer is no, the UK economy did not suddenly drop to the 6th place because of Brexit. However it's impossible to say what the situation will be at the end of 2016, as both the French and the British economies will have changed by then.

Not the answer you're looking for? Browse other questions tagged economics united-kingdom france .

19
Did the USA increase oil imports from Russia after the Ukraine invasion?