Does CO₂ cause Global Warming?

The Earth’s greenhouse effect is a natural occurrence that helps regulate the temperature of our planet. When the Sun heats the Earth, some of this heat escapes back to space. The rest of the heat, also known as infrared radiation, is trapped in the atmosphere by clouds and greenhouse gases, such as water vapor and carbon dioxide. If all of these greenhouse gases were to suddenly disappear, our planet would be 60ºF (33ºC) colder and would not support life as we know it. Human activities have enhanced the natural greenhouse effect by adding greenhouse gases to the atmosphere, very likely (greater than 90 percent chance) causing the Earth’s average temperature to rise. These additional greenhouse gases come from burning fossil fuels such as coal, natural gas, and oil to power our cars, factories, power plants, homes, offices, and schools. Cutting down trees, generating waste and farming also produce greenhouse gases.

http://www.epa.gov/climatechange/fq/science.html, as it appeared in May 2012

You may also want to read:

http://www.epa.gov/climatechange/science/stateofknowledge.html, as it appeared in May 2012

This page acknowledges the gaps in scientific climate knowledge, and differentiates fact from speculation/uncertain predictions.

Adding a NASA site which specifically references CO2 as a greenhouse gas: https://climate.nasa.gov/vital-signs/carbon-dioxide/ 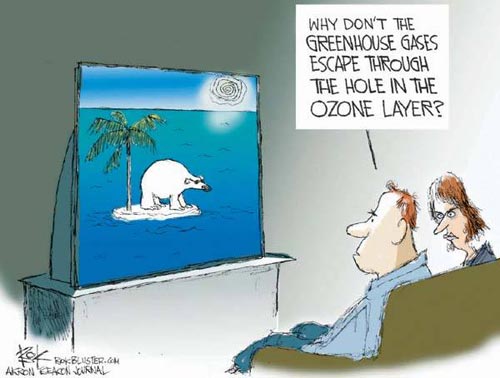 Carbon dioxide is one of the greenhouse gases.

When its atoms are bonded tightly together, the carbon dioxide molecule can absorb infrared radiation and the molecule starts to vibrate.
Eventually, the vibrating molecule will emit the radiation again, and it will likely be absorbed by yet another greenhouse gas molecule.

This absorption-emission-absorption cycle serves to keep the heat near the surface, effectively insulating the surface from the cold of space.

Here are some research papers on the absorption properties of CO2.

In 1970, NASA launched the IRIS satellite that measured infrared spectra between 400 cm-1 to 1600 cm-1.
In 1996, the Japanese Space Agency launched the IMG satellite which recorded similar observations.

[Harries 2001] compared both sets of data to discern any changes in outgoing radiation over the 26 year period.

What they found was a drop in outgoing radiation at the wavelength bands that greenhouse gases such as CO2 and methane (CH4) absorb energy.

The change in outgoing radiation was consistent with theoretical expectations.
Thus the paper found "direct experimental evidence for a significant increase in the Earth's greenhouse effect".

This result has been confirmed by subsequent papers using data from later satellites (Griggs 2004, Chen 2007).

A rather late answer on this question, but here goes: The idea that "global temperatures cause the increase of CO2." is fairly easily refuted. The line of reasoning is that the solubility of CO2 in water decreases as temperature increases, so the rise in global temperature implies that the oceans will have released some of the dissolved CO2 that it contains. The premise is correct, but the conclusion is a Non sequitur as it ignores the fact that the solubility of CO2 in water also depends on the difference in partial pressure of CO2 between the ocean and the atmosphere. As we have released CO2 from fossil fuels into the atmosphere, the partial pressure of CO2 in the atmosphere has risen, and so the oceans have been taking up more CO2, not less.

How do we know this is true? . The argument is easily refuted by the observation that the rate at which atmospheric CO2 levels are rising is less than the rate at which we are releasing CO2 into the atmosphere from fossil fuel use, which implies that the natural environment must be a net carbon sink, taking in more carbon each year than it emits. 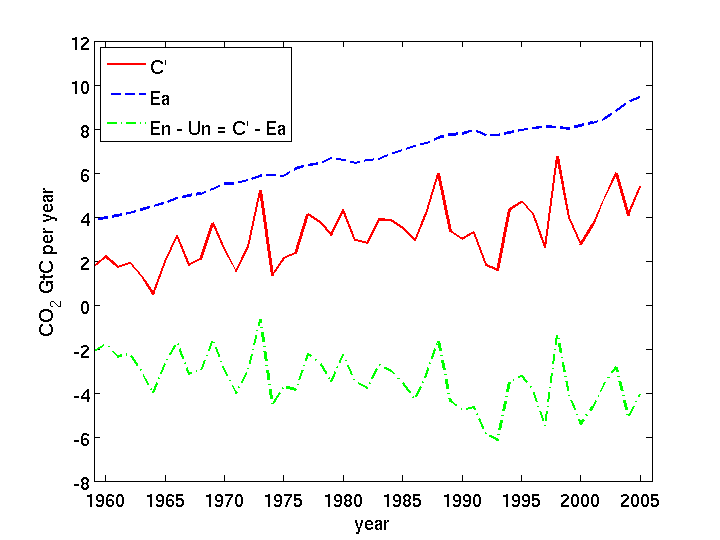 I think there is some "chicken and egg" confusion.

CO2 is absolutely a greenhouse gas, and absolutely traps heat. It does, and always has caused warming.

The part that confounds the casual observer is this - CO2 hasn't always been the initial trigger for warming events. There has to be some mechanism for increased CO2 released into the atmosphere. So, if you look at a graph of CO2 concentrations and warming, in the past you'd see warming happen before CO2 levels would increase. However, that doesn't mean that the CO2 didn't contribute to warming, once released.

In pre-mankind warming events, what often happened was that stores of CO2 were sequestered in ways where, if there was warming, would release the CO2, and then the released CO2 would increase or prolong the warming event.

The difference, now, is that humans have actively taken that CO2 and released it into the atmosphere by extracting sequestered fossil fuels and burning them. In this case, there was no warming event caused by natural factors to release certain stores of CO2, as humans actively extracted carbon that was taken out of circulation over eons.

What the science says....

When the Earth comes out of an ice age, the warming is not initiated by CO2 but by changes in the Earth's orbit. The warming causes the oceans to release CO2. The CO2 amplifies the warming and mixes through the atmosphere, spreading warming throughout the planet. So CO2 causes warming AND rising temperature causes CO2 rise. Overall, about 90% of the global warming occurs after the CO2 increase.

Skeptical Science: CO2 lags temperature - what does it mean?

Yes, but it's not the only cause. 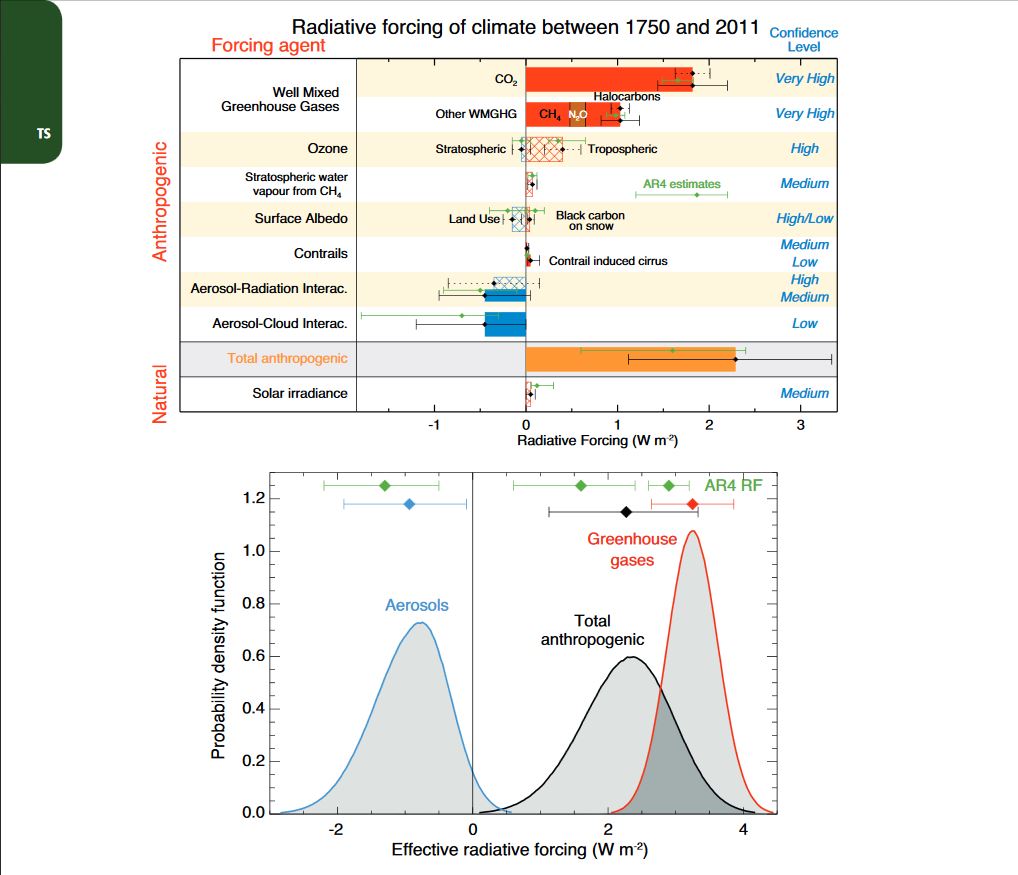 Aerosols that people release (such as sulfate and amines) affect climate just like the carbon dioxide that we release, but the aerosols cause global cooling, not global warming. Also, the effect from carbon dioxide is 2-3 times as strong as the known effect from aerosols. Here's an excerpt from the Fifth Assessment Report of the IPCC.

Natural forcing changes over the last 15 years have likely offset a substantial fraction (at least 30%) of the anthropogenic forcing increase during this period (Box TS.3). Forcing by CO2 is the largest single contributor to the total forcing during the Industrial Era and from 1980-2011. Compared to the entire Industrial Era, the dominance of CO2 forcing is larger for the 1980-2011 change with respect to other [well-mixed greenhouse gases], and there is high confidence that the offset from aerosol forcing to [well-mixed greenhouse gas] forcing during this period was much smaller than over the 1950-1980 period. {8.5.2}

There is still low agreement on the time evolution of the total aerosol [effective radiative forcing], which is the primary factor for the uncertainty in the total anthropogenic forcing. 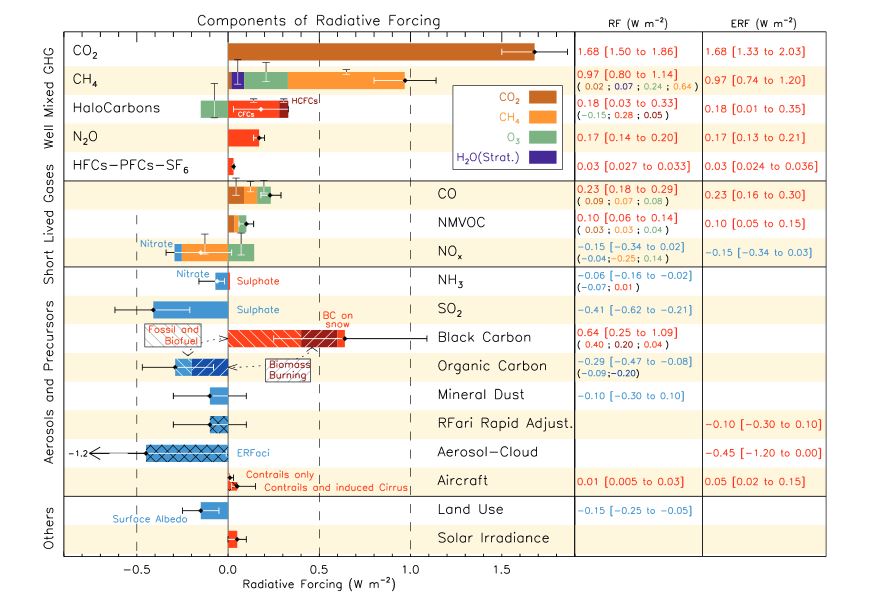 The Aerosol-Cloud error bar of -1.2 indicates that aerosol-caused clouds are known to have a very strong cooling affect.

One component of the expected future global warming is already 'in the system': as global development improves, reductions emissions (aerosol and other) will reduce cloud cover and the earth's temperature will rise somewhat. This is quite independent of the warming effect of any CO2 emissions and attempts to control that.

151
Do human activities contribute to climate change?
22
Is climate close to a "tipping point"?
9
Is global warming impossible because of CO₂'s dilution?
9
Do the recent CLOUD results have significant implications for global warming?
11
Is reducing carbon emission from cars futile?
5
Does temperature drive CO₂?
3
volcanic CO₂ emission estimates increasing

29
Did "global cooling" have as much scientific consensus as "global warming" has now?
18
Could Global Warming be good for life?
14
Is global warming irreversible?
13
Is avoiding global warming by preventing CO₂ emissions far too expensive compared to geoengineering or adapting to a warmer world?
13
Are fossil fuels making the world greener?
48
Does the logarithmic nature of global warming invalidate climate change claims?
4
Does each doubling of CO2 cause a 2-4°C increase?
12
Will global warming save millions of lives?