Did Einstein say this about his marriage?

I found a picture with a quote on facebook today quoting Einstein. 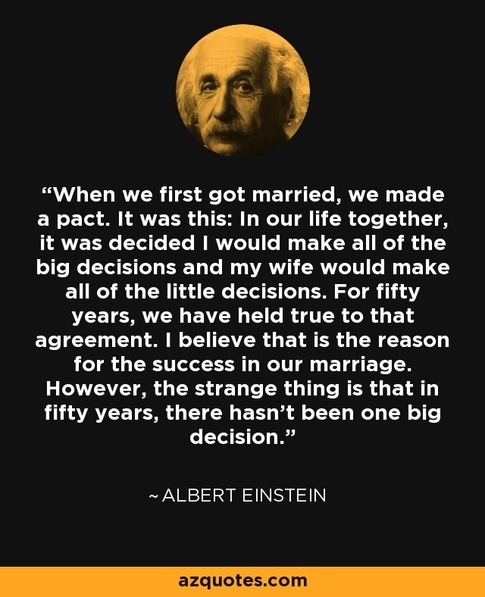 When we first got married, we made a pact. It was this:In our life together, it was decided I would make all of the big decisions and my wife would make all of the little decisions. For fifty years, we have held true to that agreement. I believe that is the reason for the success in our marriage. However, the strange thing is that in fifty years, there hasn't been one big decision.

Is there any truth to that he actually said this? (Given that he did divorce once)

Very unlikely. This is sometimes attributed to Einstein on his 50th Wedding anniversary

[I used Wikipedia as a source, as I don't think these dates are in dispute.]

He never had a 50th wedding anniversary, and he never had an opportunity to say "in fifty years, there hasn't been one big decision."

This doesn't prove the quote isn't a distorted version of something he did say.

The quote is really that of Garson Kanin as author of the 1974 book Hollywood: Stars and Starlets, Tycoons and Flesh-peddlers, Moviemakers and Moneymakers, Frauds and Geniuses, Hopefuls and Has-beens, Great Lovers and Sex Symbols, at page 181:

Professor Albert Einstein and his wife were being interviewed by the world press on the occasion of their golden wedding anniversary. They were asked the routine question: “To what do you attribute the success of your marriage?” Professor Einstein took his wife's hand in his and replied, “Well, when we were first married fifty years ago-gott im Himmel!—fifty years—we made a pact. It was this. That in our life together I would make all the big decisions and she would make all the little decisions. And we have kept to it for fifty years. That, I think, is the reason for the success of our marriage.” Then he looked up and added, “The strange thing is that in fifty years there hasn't yet been one big decision.”

Things have changed, but in Hollywood until the 1950s, the final decisions, great and small, were made by the front offices...

Kanin was reattributing a pre-existing joke to Einstein.

Harry said "Look there is nothing to it. When we got married, we made a pact. We agreed she would make the small decisions and I would make the big decisions. We never violated that agreement. As a result, we have never had a cross word with one another for twenty years and we are going to go along for twenty more on the same basis."

Joe said, "That is fine. What is the difference, where do you draw the line? You say Mary makes the small decisions. What does she decide?"

"Well," he said, "Mary decides, for instance, where I work; should we buy a house; where the kids go to school; you know that kind of thing." (Laughter)

Joe said, "If those are the small things, what do you do?"

He said, "Oh, I make the big decisions, should we recognize Red China? What are we going to do about Nasser?"

And from the 1951 book Christian Love:

One husband after a year of marriage reported to a masculine friend, "We decided that she would make the little decisions and I would make the big ones, and we are getting along fine; no big decisions have come up so far."

The oldest example, from 1947, in The Tax Structure of the State of Washington, seems to have the genders reversed:

It's more or less impossible to prove the negative, but unless someone can find the actual quote, I'm going to say No.

Per Wikipedia, his first marriage ended in divorce after sixteen years, and his second marriage ended with him a widower after seventeen years. Neither one is a candidate for a successful marriage of anywhere near fifty years — even if he could have called his first marriage successful for the first fifteen years, and his second for the full seventeen, that's a total of thirty-two years, which I doubt he would have combined and rounded up to fifty, then attributed to that agreement.

On the other hand, he did make a few glib comments which were not intended to be taken literally (the thing about compound interest, the one about sitting on a hot stove, etc.).

I don't think so.

For example, W. Isaacson's biography, which is very well documented and covers a lot of his personal life, doesn't cite anything like that at all.

Also, he had 2 marriages, each of less than 20 years of length (as cited by the other answers).

I seriously doubt he said something like that about his first wife. He did not have a great relationship with her, and this is documented in a famous list of "cruel duties" which he forced his wife to agree to:

A. You will make sure:

B. You will renounce all personal relations with me insofar as they are not completely necessary for social reasons. Specifically, You will forego:

C. You will obey the following points in your relations with me:

D. You will undertake not to belittle me in front of our children, either through words or behavior.

On the other hand, while his second marriage with his first cousin Elsa was much more happy, I don't think this quote is something that would be applied to it. Citing the another biography, as paraphrased by Wikipedia

Elsa spent most of her marriage with Albert acting as gatekeeper, protecting him from unwelcome visitors and charlatans. She also was the driving force behind building their summer house in 1929.

Note that this second biography seems much less reliable as it contains "shock claims" in its sleeve ("This controversial account of Albert Einstein's scandalous personal life challenges the image of this genius, painting a shocking portrait that exposes him as "an adulterous, egomaniacal misogynist who may have even beaten his first wife"").

51
Did Einstein ever remark on compound interest?