Do sandwiches taste better when someone else makes them?

I'm a bit skeptical about the claim in this poster: 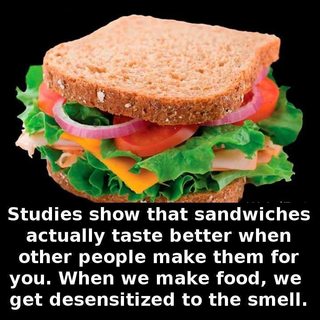 Studies show that sandwiches actually taste better when other people make them for you. When we make food, we get desensitized to the smell.

It's apparently fairly widespread. The New York Times and Forbes are at least two sites mentioning this. Forbes links to two relevant studies; one is behind a paywall and the other (which seems to have contained the answer) leads to a 404.

Does food taste better when someone else makes it?

No, studies have not shown that, as far as I can tell. There is, however, a grain of truth in this claim.

The missing study is here and it does not confirm the claim, nor it addresses the claim:

Rather than increase the likelihood of enacting the simulated behavior (eating), simulation evoked the consequences of the behavior (habituation)

Basically what the study has found is that if you imagine eating M&Ms, then eating them is less satisfactory than otherwise, similarly to what happens when foods are more satisfactory at the first bite than at the tenth ("habituation").

This has nothing to do with cooking, or the smell.

That said, it has been found that smelling a food, or a neutral odor, reduces craving.

Food cravings are a risk factor for the development of problem eating behaviour. We examined effects of olfactory stimulation on food craving reduction. A brief odour exposure reduced cravings for food as well as chocolate. A simple olfactory task presents a practical tool for reducing food cravings.

This is confirmed by this later review of their findings

Nevertheless, there are positive results with novel approaches to reduce food cravings, one such experimental therapy involves introducing a neutral odour to self-reported chocolate cravers after craving stimulation. Interestingly, these individuals reported a reduction in the intensity of cravings (Kemps and Tiggemann 2013)

Not the answer you're looking for? Browse other questions tagged nutrition taste .

17
Do things taste better if they contain nutrients that the body needs?
10
Is eating fruits separately/on an empty stomach healthier?
15
Does canned beer taste better than bottled beer?
3
Does salt (or sodium) not make you thirsty?