Is this graph of "mass shootings" backed up by reliable data?

There's this graph on the internets: 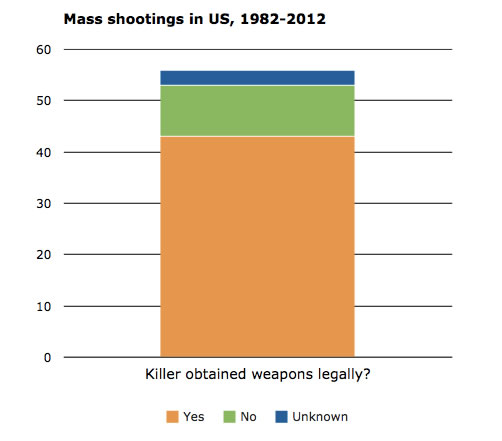 But I was unable to find any sources of the data. Most of the sites that present the graph seem to be politically oriented. Is this backed by any hard data?

The source of the graphic in the OP is Mother Jones.

This is what they consider a "mass shooting".

Our research has focused on seemingly indiscriminate rampages in public places resulting in four or more victims killed.

A Guide to Mass Shootings in America

Mother Jones considered a specific list of 56 US mass shootings starting with the 8/20/1982 machine shop shooting where the shooter was killed by civilian using a car to hit the shooter and run over his body and ending with the 7/20/2012 Aurora theater shootings.

Mother Jones originally reported that of these 56 shootings, the data is as shown in the OP, but updated/revised the data to say out of 62 shootings through 2012, in 49 cases the gun(s) was/were obtained legally, 12 illegally, and 1 unknown.

Looking at the data table spread sheet, in many cases where they acknowledge that it is "unknown" where the gun was obtained, they assume it was obtained legally.

Also the list is incomplete. For example it does not include the 01 March 1983 fatal shooting of 6 people by Louis D. Hastings in McCarthy, Alaska.

For another source see Where'd They Get Their Guns, An Analysis of High Profile Shootings 1963-2001.

This report gives more-detailed explanations of the legality of the gun purchases in the first 20 years of the Mother Jones data set.

The graph is absolutely based on reasonably good data but the conclusions someone might draw from the graph alone is lacking context.

"Crimes primarily related to gang activity, armed robbery, or domestic violence in homes are not included."

There is a slight chance that these criteria might bias the fraction of illegally obtained weapons involved in the included cases.

The graph covers up to 2012 but motherjones expanded their dataset using the same criteria. We can compare to a database which doesn't have the same exclusion criteria

Data from Shooting Tracker tends to include far more cases for some of these time periods.

They use a very simple definition

FOUR or more shot and/or killed in a single event [incident], at the same general time and location, not including the shooter.

And do not exclude gang activities or robberies. So, for example, in 2014 motherjones include 4 events while gunviolencearchive includes 280.

Not the answer you're looking for? Browse other questions tagged united-states guns criminology .

46
Can anything remove fingerprints from your fingers?
8
Does the US have $54 trillion?
7
Deaths due to firearms in the US since Civil War
14
Did Hillary Clinton tell a Secret Service agent to "F off" when he said "Good Morning" to her?
15
Are 30% of U.S. prisoners deaf or hard of hearing?
19
Is Mexico one of the "highest crime Nations in the world"?
33
Are fully automatic firearms very hard for civilians to obtain in the USA?
94
On average in the US, is there a mass shooting 9 out of every 10 days?
74
Is America “the only nation where this [a mass shooting] regularly happens”?