It has been widely reported that the Facebook post of a user called Pablo Reyes made a number of startling predictions:

Call me crazy but in 2016 Hillary Clinton will be the first female president, the world will go crazy over the death of a gorilla, Prince will die, Muhammad Ali will die, Kimbo Slice will die, Donald Trump will die. The USA will experience the worst mass shooting .. I'm not trying to scare anyone, but you'll remember my name.

At least four of those predictions have come to pass. I just don't think it's possible that this person predicted those events before the fact. Additionally, there are a relatively small number of comments for such a popular post and they were all made yesterday.

I think the more likely explanation is that they spoofed the timestamp on Facebook, but on that side of things, it's also fairly unlikely that that's possible (far from impossible though).

Were these predictions made in December 2015?

No it's a fake prediction made by editing the post. 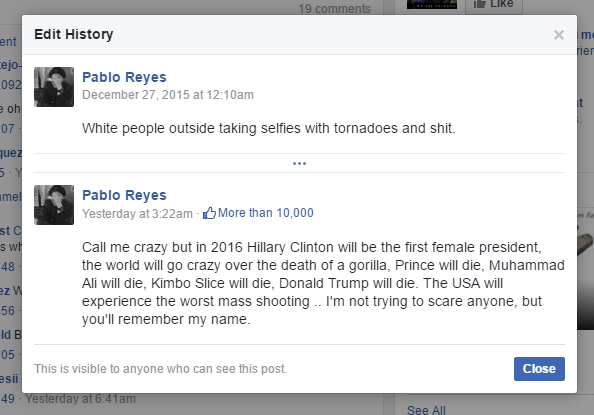 Not the answer you're looking for? Browse other questions tagged divination .