Is part of Himalayan mountain Kangtega a secret base?

There are plenty of sites claiming that part of Himalayan mountain Kangtega is a secret base:

First, this could be an open area only visible with high end digital equipment. Meaning this could be a entrance way for UFOs to enter and exit, but a holographic wall is created to cover up so no one will notice it. Its actually on the wall of a cliff, so that not the direction any climber would take.

Second, Google may have deliberately covered up this area so that we cannot see a top secret US govt military facility. You say Area 51 is secret...no, thats old school. There are newer and more secret bases located around the globe.

Secret Base Found In Nepal Himalaya Mountains, But Is It Govt Or Alien? Jan 2016, Video, UFO Sighting News.

Why is part of Himalayan mountain Kangtega blacked out on Google maps? Is it a secret UFO base? 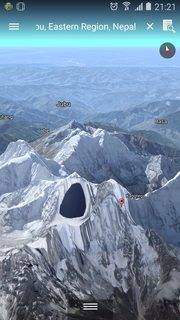 I strongly doubt it is a UFO landing area, as has been claimed.

I am asked to interpret satellite and air photos on a regular basis for my job and sometimes for the press. People spot things in them all the time and almost always misinterpret them. A funny one recently was the Nazi South Pole interpretation of a location in Antarctica. Actually the shape is quite similar.

Imagery from planes or satellites is often off-nadir. That is the object on the ground is not directly under the device capturing the image. Famously after 9/11 I heard a newscaster (Jennings if I remember) stated it was fortunate the satellites were overhead to capture images of lower Manhattan. Then when they showed the images it was clear they they were in now way overhead and were completely off-nadir, indeed they came in almost sideways!

This is what you have here. The camera was not able to capture this portion of the terrain as well as other nearby terrain so it is difficult to ascertain the object. It is not a base but merely a what appears as normal very steep terrain. Check it in Landsat archive and it is fine, ditto for other satellite systems. The more sheer the face is the more likely this is to happen as a non-overhead system will have issues. Usually Google corrects this by mosaicing numerous images from different flights, but not here. It may be so steep it would be very difficult to capture even when perfectly at nadir.

Now one more thing. Google drapes its imagery over a DEM to get the 3D effect. You often have "holes" in DEM data in steep locations as SRTM (the most used draping DEM) and other remotely sensed elevation products struggle to capture elevation, and hence slopes, at angles close to 90 degrees. It is possible from the lower image to ascertain that this is so steep that no DEM slope can be obtained to drape the google image. Indeed just look around the google image is terribly distorted in this region. The paper Comparison of new and existing global digital elevation models tells you than SRTM (the most likely DEM here) has problems in regions greater than 25 degrees! This is close to 90. and that, "in high mountainous areas with steep slopes, SRTM-3 typically has many missing data (Figure 2)." Without a good DEM you cannot stretch the image to get that nice 3D effect.

Below is it in Bing Maps. Again more of a shadow than anything, but no different than the other shadows in the region. 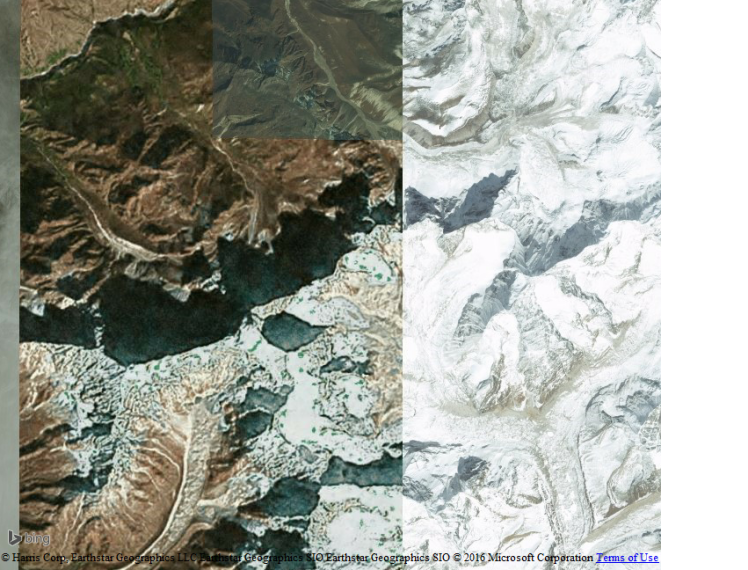 I have a really good close-up of the shadow in this image (thanks FlickR coordinate search).

I can tell you this is a very steep location.

The Google image uses an off-nadir image that is missing this location or at best does not capture it well.

Just a normal steep location in shadow with a camera angle making it difficult to view the terrain and the google image has given up trying to even do this and hence the black oddly shaped object.

So that is it basically. You have a great close-up in the lower image. Shadow, steepness, sun angle, and camera angle. Get a different angle and get the object nice and clear. No alien bases.

Please note in the original question the poster has rotated the google image 180 degrees (see the red part of the north arrow) so north is down! On my maps north is up so you need to rotate everything 180 degrees in your head for it to match.

Kangtega has been explored enough to rule this out: 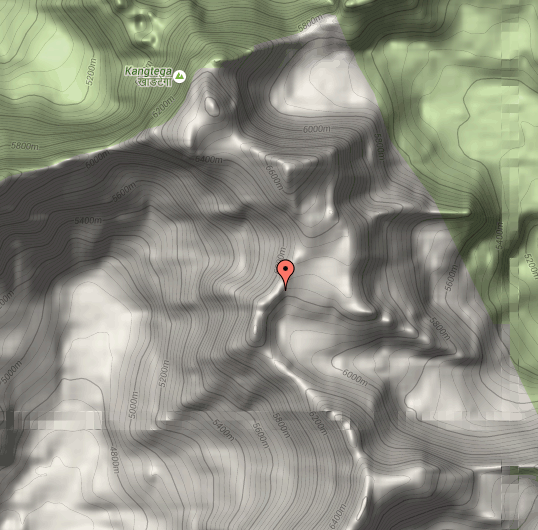 If there's anything big up there, we would have seen it.

Note: I'm not a mountaineer and cannot quickly identify slopes an directions; others may want to add that information.

Not the answer you're looking for? Browse other questions tagged geography ufo .

3
Have numerous people disappeared "without trace" at Black Mountain National Park?
10
Secret instructions for the German submarines for the cruise to Agartha, a hidden land in the Antarctic. Are they authentic?