Does a lack of radiation shadows disprove the Big Bang Theory?

This article from Creation Magazine argues that:

If the big bang were true, the light from the fireball should cast shadows in the foreground of all galaxy clusters.

It uses some 2006 findings about Cosmic Microwave Background radiation to argue that there are flaws in the Big Bang Theory.

The page links to a related article which says:

NASA announced, with fanfare, how they were looking right back into the beginning of the universe. But the lack of the right shadows shows that CMB cannot be from the big bang at all. Thus what had been touted as one of the main glorious predictions of the big bang is falsified. If the CMB has nothing to do with the big bang, then the COBE fluctuations are irrelevant.

Is there any truth in the claims made in both of these articles?

Shadows will be cast when a body is in front of a source of light. So if the Big Bang produced the most amount of light, why isn't this light cast on everything.

The quote in the OP from the creation article is an accurate summary of a mainstream Science Daily article: Big Bang's Afterglow Fails Intergalactic 'Shadow' Test:

If the standard Big Bang theory of the universe is accurate and the background microwave radiation came to Earth from the furthest edges of the universe, then massive X-ray emitting clusters of galaxies nearest our own Milky Way galaxy should all cast shadows on the microwave background. 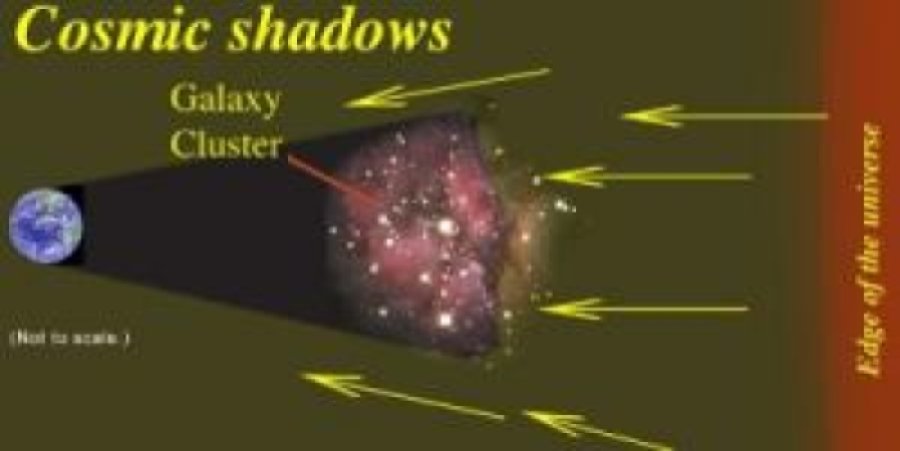 In turn, the Science Daily article is based mainly upon:

The Sunyaev-Zel'dovich effect in a sample of 31 clusters: A comparison between the X-ray predicted and WMAP observed decrement, Astrophysical Journal, Vol. 648, p. 176-199. (alternative link to pre-prints)

One vital test of the present cosmological paradigm is the search for scattering of the CMB by foreground structures such as clusters of galaxies. Such observations can provide important information both about clusters of galaxies as well as basic cosmological parameters like Ho. For the CMB, scattering arises from the Compton interaction with free electrons in the hot (X-ray temperature) plasma of clusters of galaxies, which removes Rayleigh-Jeans blackbody flux in the direction of a cluster, and leads to an apparent decrease in the CMB temperature, a phenomenon known as the Sunyaev-Zel’dovich effect (SZE). By now, the degree of SZE is highly predictable for many clusters of galaxies, because their hot intracluster medium (ICM) properties are well-measured by X-ray satellite missions.

In summary, it is through the first detailed radial profile comparison between X-ray and microwave observations that an apparent sample-wide discrepancy between the expected and measured levels of SZE from some of the best known clusters of galaxies was uncovered

See also Detailed X-ray/WMAP comparison for a sample of 31 nearby galaxy clusters - incomplete Sunyaev-Zel'dovich silhouette and the question of the CMB distance scale the abstract of which says:

A resolution of this discrepancy between predicted and observed decrements have potentially extreme ramifications for our interpretation of the CMB. One is forced to conclude that either the CMB is non-cosmological, or there are issues with the WMAP data itself which must be taken into account when interpreting the CMB emission.

The apparent absence of shadows where shadows were expected to be is raising new questions about the faint glow of microwave radiation once hailed as proof that the universe was created by a "Big Bang."

which offers another popular science summary.

Both the creation article and the Science Daily article quote Dr. Lieu as saying:

Either it (the microwave background) isn’t coming from behind the clusters, which means the Big Bang is blown away, or … there is something else going on

The title in the OP isn't representative of this "either ... or" statement.

In other words, there are alternative explanations, no one quoted in the OP is saying that the research "disproves" the big bang theory.

Dr. Lieu's publication was from 2006. Looking at articles citing to Dr. Lieu's is the best way to see the current status of this research. The big bang theory is not considered disproven.

Hence light from the BB was everywhere in the whole universe. If you were there it would be like living in the middle of a massive fireball - so there cannot be any shadows in any direction. You could not be at the "edge" of that fireball, everything was in the middle of it. And, until 380,000 years after the BB, photons were not free to travel, as the universe was not even transparent to light.

The effect mentioned in the OP comes from a study in 2006 by Dr Lieu of the University of Alabama. It relates to the fact that, although the CMB comes from everywhere, in the direction of glacatic clusters we should see a reduction in the glow. This is caused by ionised gases in the cluster distorting the CMB and is called the Sunyaev–Zel’dovich effect (SZE). Dr Lieu found that the signal from the direction of clusters did not match the predicted SZE. However, in 2009 Diego and Partridge used more data from the WMAP probe and found that, while there are still some discrepancies, they depend strongly on the particular model used, and they can accommodate the measurements. They concluded:

the combination of a steeper gas profile and the contribution from point sources allows us to consistently explain the X-ray emission and SZE in galaxy clusters as measured by both ROSAT and WMAP.

Not the answer you're looking for? Browse other questions tagged physics astronomy big-bang-theory cosmology .

28
Is modern String Theory stuck in the "no predictions" land?
14
Does the theory of evolution contradict the second law of thermodynamics?
22
Is x% noise on TV due to Big Bang's background radiation?
2
Does the second law of thermodynamics contradict the Big Bang Theory?
10
Does the EM drive (electromagnetic drive) work despite the apparent lack of propellant?
1
Does General Relativity bring "Cosmic Time," which is the same for all frames-of-reference?
30
Does Kasardevi, India, have an enormous geomagnetic field because of the Van Allen Belt?