I've seen on a lot of websites that nail-biting behaviour is due to lack of iron in the blood. I'm wondering if is this actually true, or just an urban myth which has spread and spread?

biology nutritional-supplements physiology
Share
Improve this question
edited May 5 '14 at 10:56

There are two manifestations of iron deficiency that could explain this claim: koilonychia and pica.

Koilonychia or "spoon nails" is when the nail becomes concave. It can be a classic sign of iron deficiency on physical exam.* The nails of iron-deficient patients may also become brittle and/or split lengthwise. 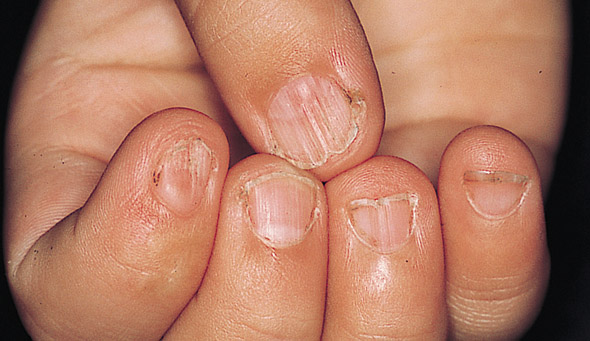 Some form of pica is present in about half of cases of iron deficiency. It describes a broad range of eating disorders, often associated with mineral deficiencies, where a person will compulsively eat or chew on an unusual substance. Common examples are ice, clay, laundry starch, hair, and the classic, lead paint chips. However nailbiting itself has not been classified as a form of pica, possibly because it's so common among people without any nutritional deficit. Nailbiting (fancy medical word: onychophagia) is overwhelmingly attributed to anxiety, general compulsive behavior, or just being a kid.

So it's not inconceivable that an iron-deficient person with a tendency to put unusual things in their mouth and brittle, misshapen nails might start chewing on them. But it would be a fairly useless diagnostic sign because nailbiting due to other causes is so common.

*Koilonychia, like many "classic" signs, may be more common on med school exams than in real life.

Nail biting can reflect mineral deficiencies - iron perhaps but also magnesium or calcium or zinc. In my case, it's magnesium. If I take magnesium supplements, my desire to bite my nails goes away, when I stop my desire returns. Also, biotin and vitamin D have been suggested (for references,please see below). For those of you taking multivitamins or supplements, two things to note:

One last thought - these issues are particularly true for people with malabsorption in the gut. For healthy people, this should not be an issue. I would suggest trying a few different minerals or vitamins, and see if one of these correlates with less nail biting. Be careful with iron, however, because too much is unhealthy.

Not the answer you're looking for? Browse other questions tagged biology nutritional-supplements physiology .

46
Do men think about sex every 7 seconds?
32
Is the Daddy Long Legs spider the world's most venomous?
16
Does the number of lobes on a green pepper indicate any specific culinary traits about the individual pepper?
36
Can you cause mosquitos to explode from drinking too much blood by flexing your muscles?
8
Do fish oil or omega-3 fatty acids increase the risk of cancer?
14
Does locking one's knees lead to fainting?
5
Does consuming foods rich in phytic acid prevent mineral absorption?