Did Bill Nye get booed by a room full of Texans for saying that the moon reflected the suns light?

Did Bill Nye get booed by a room full of Texans for saying that the moon reflected the Sun's light instead of coming from God? This is a well-known internet rumour. Is there any evidence proving/refuting it?

Well maybe by one lady and there was a low murmur.

The original article is behind a pay wall. A good facsimile might be here.

Dylan Otto Krider has a series of posts explaining how the whole thing went down.

Even though the bulk of his story talked about how most everyone enjoyed the show, people latched onto the country bumpkin angle. Compounding the problem was that the 2007 post mentioned the story had been "removed" and people were left with BSAlert's interpretation of events. The wording of the post, in fact, was identical to a post that would surface again on ThinkAtheist in February 2009, which was latched onto by this Examiner.

From Krider's interview with Woods...

"There was some mischaracterization of what happened," Woods says. It seemed like the story was always construed in such a way to make his hometown look like backwoods idiots. "The one that always floors me is they say, oh, he was booed. No, he wasn’t booed. I've gone back through the story, and nowhere does it say he was booed."

"Would you describe it as a huff?" we asked.

So, in the end, it is an illustrative story worthy of posting on, but not the booing crowd we made it out to be. A few religious people in a crowd of 600, storming out, visibly angry, and the lecture went on.

For Skeptics, it's not just an example of this kind of conditioning that allows people to close themselves off from any contrary evidence to their views, no matter how obvious and common sensical, but how, in the Internet age, stories take on a life of their own and are more likely to catch fire because they are cast in their most sensationalistic light. 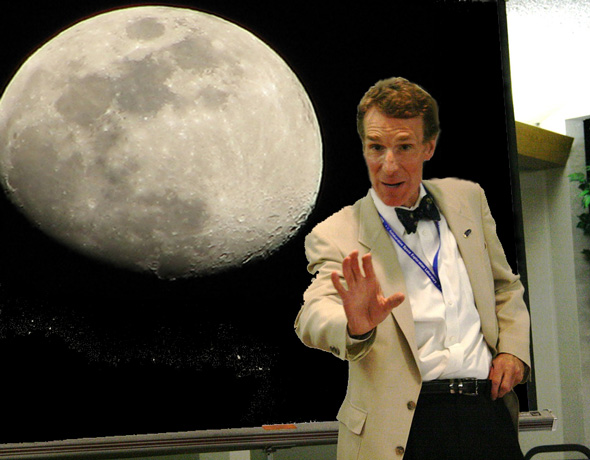 The Emmy-winning scientist angered a few audience members when he criticized literal interpretation of the biblical verse Genesis 1:16, which reads:

He pointed out that the sun, the “greater light,” is but one of countless stars and that the “lesser light” is the moon, which really is not a light at all, rather a reflector of light.

But according to the reporter who wrote the original article for the Waco Tribune the later retellings overplayed what happened:

"There was some mischaracterization of what happened," Tim Woods says. It seemed like the story was always construed in such a way to make his hometown look like backwoods idiots.

"The one that always floors me is they say, oh, he was booed. No, he wasn’t booed. I've gone back through the story, and nowhere does it say he was booed."

The original article is here. It is archived and unfortunately you have to subscribe to access the full article which you may want to do depending on how much you want to find out.

It does say in the brief description that he "ruffled a few religious feathers along the way" so it would be fair to believe that the moon comment was not the sole reason for the booing however it would be the most outrageous objectionable point (for them of course) to pick up on for a perplexing news article, and it would also contribute to the crowds reaction.

Not the answer you're looking for? Browse other questions tagged astronomy moon sun .

20
Did a Jewish rabbi precisely calculate the duration of the full moon cycle 1800 years ago?
11
Does the 'super-moon' have a measurable effect on probability and magnitude of earthquakes?