Is it true that hot water freezes faster than cold water and if so, what practical applications have there been found for this phenomenon?

In certain settings, cold water freezers slower than hot water. This is called the Mpemba effect.

The Mpemba effect is the observation that warmer water sometimes freezes faster than colder water. Although the observation has been verified, there is no single scientific explanation for the effect.

Hot water can in fact freeze faster than cold water for a wide range of experimental conditions. This phenomenon is extremely counterintuitive, and surprising even to most scientists, but it is in fact real. It has been seen and studied in numerous experiments. While this phenomenon has been known for centuries, and was described by Aristotle, Bacon, and Descartes [1—3], it was not introduced to the modern scientific community until 1969, by a Tanzanian high school student named Mpemba.

Some suggested reasons given in the paper:

This was, actually, my 6th 5th grade Science Fair experiment. :)

And I'd never heard of this effect before; it was a random experiment I thought of and tried.

My answer: it depends on what you mean by "freeze".

No idea why, but I'm darn sure my experiment was accurate.

I found the data! 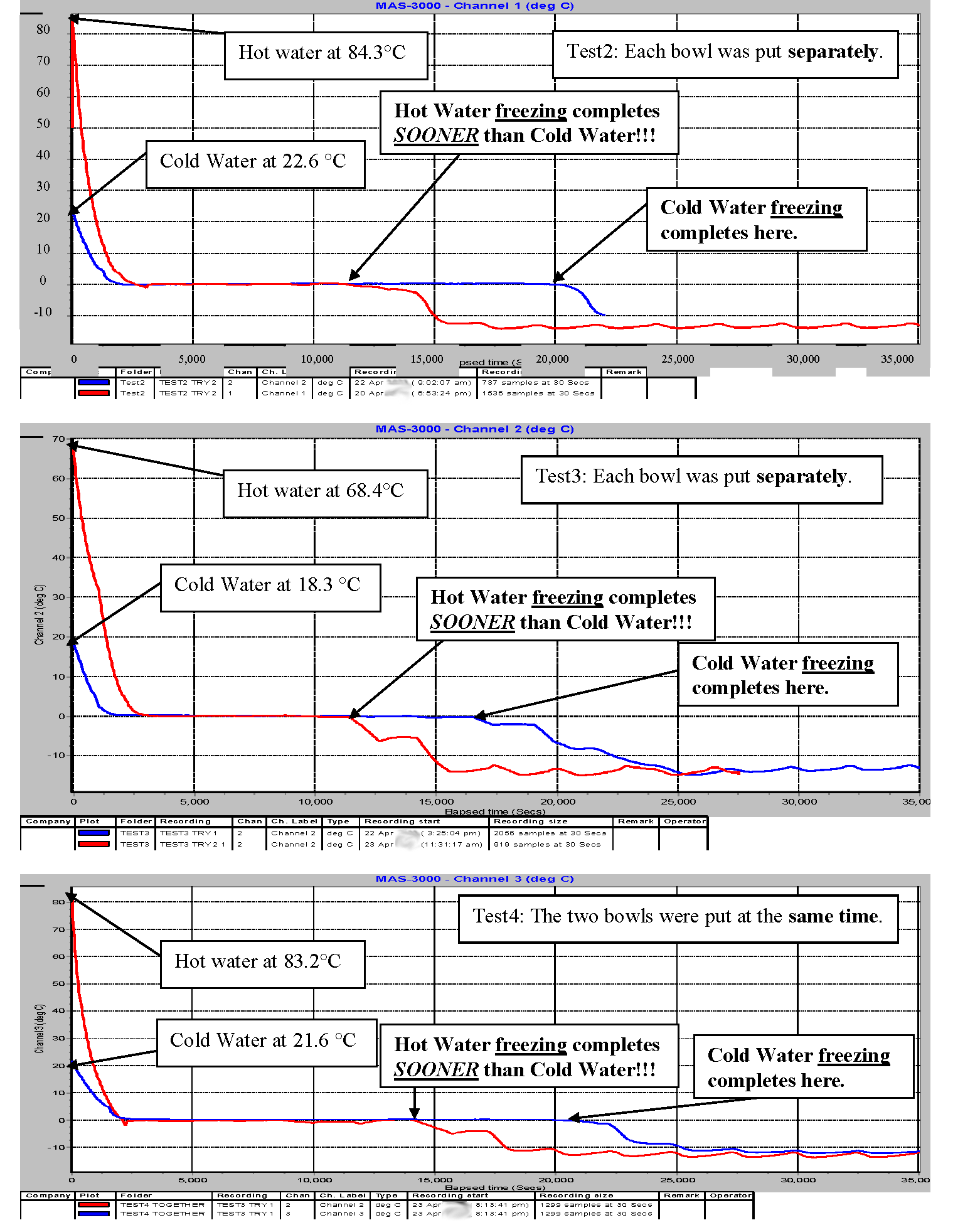 I blurred out the years to avoid carbon dating myself. ;)

A new paper on this phenomenon has been published recently. It offers yet another explanation and has even caught the attention of popular media.

They say the interaction between the hydrogen bonds and the stronger bonds that hold the hydrogen and oxygen atoms in each molecule together, known as covalent bonds, is what causes the effect. Normally when a liquid is heated, the covalent bonds between atoms stretch and store energy. The scientists argue that in water, the hydrogen bonds produce an unusual effect that causes the covalent bonds to shorten and store energy when heated. This they say leads to the bonds to release their energy in an exponential way compared to the initial amount stored when they are cooled in a freezer. So hot water will lose more energy faster than cool water. Dr Changqing said: “Heating stores energy by shortening and stiffening the H-O covalent bond. “Cooling in a refrigerator, the H-O bond releases its energy at a rate that depends exponentially on the initially stored energy, and therefore, Mpemba effect happens.” The Royal Society of Chemistry received more than 22,000 responses to its call for a solution to the Mpemba effect and it is still receiving theories despite the competition closing a year ago.

It is true, in proper circumstances.

The Scientific explanation for that relates to the fact the freezing temperature may increase with the pressure.

The Mpemba effect is about freezing hot samples faster than cold which may not represent a substantial difference with small pressure variations but phenomenons like supercooling and superheating do have practical applications such as better preservation of organs in medical refrigerators and superconductivity in electrical devices.

You can find more about this in: The Mpemba effect: why hot water can sometimes freeze faster than cold.

Not the answer you're looking for? Browse other questions tagged physics water .

1
Does warm water freeze faster than cool water?
60
Will unsubscribing from spam get you even more spam?
10
Does putting a bar of soap under your mattress prevent leg cramps?
11
Does cold water boil faster than hot water?

19
Does drinking warm or hot water aid in digestion?
13
Does bathing using a shower use more water than using a bucket or bath-tub?
20
Is drinking hot water more beneficial during hot weather?
16
Is there any reason to use cold water over hot water for boiling?
18
Can a man fall faster than the speed of sound?
14
Does soaking in natural hot springs have any health benefits when compared to soaking in heated non-spring water?
11
Does cold water boil faster than hot water?