Amongst other claims at the Low Dose Naltrexone (LDN) Home Page is for example:

Low-dose naltrexone holds great promise for the millions of people worldwide with autoimmune diseases or central nervous system disorders or who face a deadly cancer.

LDN is also said to have no significant side effects.

In this answer, you're going to see some of the same arguments and tactics as you see from those pushing DCA as a potential cure for cancer.

This is mainly because this particular line of treatment may yield some legitimate benefits for a variety of related conditions, but has not yet been been appropriately tested, even though studies are underway (as I'll show later).

Simply put, until the data is in, there is no reason to think that Low-Dose-Naltrexone is a miracle cure for anything, or that there is some conspiracy to keep evidence from coming to light. Steve Novella and PZ Myers take a good look at this issue in both neurologicablog, and pharyngula it's with regard to DCA and cancer, but they address the issue of jumping the gun before the research is in and the "big pharma is covering this up" aspect of the argument, which is essentially the same here. 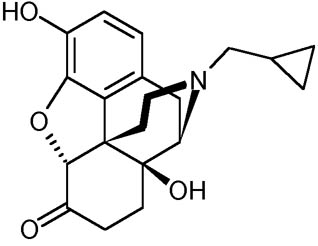 Naltrexone is an opiate antagonist. Essentially what it does is block the receptors in the body which opiate drugs (heroin, morphine, oxycontin) would bind to in order to stop them from having an effect. It is most often used clinically to treat opiate dependence, and occasionally alcoholism. It is also sometimes used in emergency detoxification from opiate overdoses, but only in a hospital setting. Instructions for patients regarding its use can be found here, including why it is typically prescribed, what the dangers are, and what to consult with your physician about.

Reasons to be skeptical of this claim

Any time you see a claim that a variety of conditions such as this can be affected by one drug or therapy, there is reason to be skeptical.

Also, just because something is FDA approved for one condition does not automatically make it safe or even reasonable for other conditions. For example, radiation therapy is FDA approved to treat certain cancers, but that does not mean it should be used to treat the common cold.

Skepticism is especially warranted when you see arguments like this:

(which is literally the same argument made for the big pharma suppression of DCA for cancer.)

As for the claim that it has "no side effects", this is just a general point to apply any time one is skeptically evaluating medical claims:

Clearly naltrexone has side effects, and some are mentioned at the link provided in your question. Although they aren't particularly focused on, presumably this is because the dosage rates they are reccommending haven't been studied enough yet to know what those side effects would be.

Also, naltrexone is NOT without patent protection and in fact, patents seem to be held for the compound in several forms and this statement seems to be included mostly to drum up support for research into using Low-Dose-Naltrexone (LDN) for the variety of conditions mentioned. However the fact that this can be disproved with a simple web search can cause the claim to lose credibility, regardless of the science.

Claims like this call for skepticism, but one incorrect aspect of the argument does not necessarily mean that all of the information is incorrect. Here we have to especially careful to separate the science from the "conspiracy" elements of the claim, and evaluate the science on its own merit while not allowing ourselves to be swayed by the supposed conspiracy.

What is the mechanism of action for Low-Dose-Naltrexone?

The proposed mechanism by which LDN therapy is theorized to work is a little complex, and is explained by its proponents here:

In order to understand how LDN works, it is crucial to briefly introduce the workings of the ‘natural opioid’ (endorphin) system.

Endorphins are opiate-like molecules produced naturally in the body. The term ‘endorphin’ comes from ‘endogenous morphine’, meaning that it is created within the body, and differentiating it from opioids that are administered from external sources.

Endorphins are produced in most cells in the body, and are important regulators of cell growth and therefore the immune system. Disorders of the immune system can occur with unusually low levels of these endorphins. The particular endorphin that has been found to influence cell growth as well as immunity is called Opioid Growth Factor (OGF) or Met-Enkephalin.

For an endorphin such as OGF to exert its beneficial effects, it must interact with the body’s cells. It does this by binding to a receptor on the surface of the cells. The receptor to which OGF binds is the ‘Opioid Growth Factor Receptor’ (OGFr) – previously known as the Zeta (ζ) receptor.

Thus, for the endorphin system to be fully functional, two elements are required: opioid production and cell interaction.

As a consequence of this displacement, the affected cells become deficient in OGF and three things happen:

1.Receptor production is increased, in order to try to capture more OGF. 2.Receptor sensitivity is increased, also to try to capture more OGF. 3.Production of OGF is increased, in order to compensate for the perceived shortage of OGF. Since LDN blocks the OGF receptors only for a few hours before it is naturally excreted, what results is a rebound effect; in which both the production and utilization of OGF is greatly increased. Once the LDN has been metabolized, the elevated endorphins produced as a result of the rebound effect can now interact with the more-sensitive and more-plentiful receptors and assist in regulating cell growth and immunity.

The duration of the rebound effect varies from individual to individual, but generally persists for about one day.

The benefits of the rebound effect can only be utilized by taking a low dose of regular naltrexone. Taking a high dose of naltrexone or using a timed-release formulation will result in continuous blockade of OGF receptors, and the rebound effect will not serve any useful purpose.

Individuals vary in their metabolic speed and this will result in inter-patient variation in the speed at which LDN is eliminated from the body, as well as the length of the rebound effect. Whilst a single daily dose of between 3mg and 5mg will be suitable for most patients, individual modification of dose or frequency is sometimes needed.

This explanation remains theoretical and controversial, although it is currently being studied.

Low-dose Naltrexone is currently being studied for :

Multiple Sclerosis (MS) - Study on mice with experimental autoimmune encephalomyelitis (EAE, an animal model used to study MS in the laboratory) indicates LDN therapy is non-toxic to patients, did not exacerbate symptoms, but also may have positive effects.

Amylotrphic Lateral Sclerosis (ALS) - currently being studied but as of now, I find the data unavailable

Crohn's Disease - treatment of at least one pediatric patient was attempted, however the data is unavailable at this time.

LDN has been studied with regard to Fibromyalgia as well, but I am not going to consider those trials, mostly due to the fact that fibromyalgia itself remains controversial.

The data from the AIDS study is still unavailable.

Right now, Low-Dose-Naltrexone shows some promise in a few conditions. However, the research is still quite preliminary, and likely will not be in for years. However, until its mechanism of action, and potential side effects have been better studied, LDN will be ripe for colonization by woo and there will likely be those who will claim it to be a cure for everything from athlete's foot to xenophobia, because "they haven't proven it's not". It will also probably fall victim to the general public's lack of knowledge of how the research process works, and will probably be sensationalized by the media more than once.

Basically, it seems that some are jumping on the LDN bandwagon a little prematurely.

The term "cure" is somewhat of a misnomer when talking about many types of diseases, disorders, ailments, and health conditions. For example, to "cure" a bacterial infection we could use antibiotics. We can not "cure" polio, but we can prevent it with vaccines. You might hear someone say "My cancer has been cured!" -- but in reality it's just in remission.

Remission is a key word when it comes to treating lifelong chronic illnesses. Many patients simply strive for remission -- or at least homeostasis. If they find a remedy that can facilitate this, some may refer to it as their "cure".

With that said, LDN has come a long way since this question was first posted three years ago. There are (tens of?) thousands of anecdotal accounts of its success (putting autoimmune and other diseases into remission), as well as published clinical trial studies and research reports from all around the world. Several books about it have been published. A few international LDN advocacy groups have formed. And there's even an annual global LDN conference.

There is now an abundance of LDN info out there (GIYF). Here are three that might help point someone in the right direction:

LDN and Multiple Sclerosis
http://www.ldnresearchtrust.org/node/209
[has info on four studies, including a University of California-San Francisco study: "Pilot trial of low-dose naltrexone and quality of life in multiple sclerosis," (Annals of Neurology, 19 Feb 2010)]

LDN and Fibromyalgia
http://www.ldnresearchtrust.org/fibromyalgia
[has info on a Stanford University School of Medicine study: "The use of low-dose naltrexone (LDN) as a novel anti-inflammatory treatment for chronic pain," (Clinical Rheumatology, Apr 2014)]

LDN and Autism
http://www.ldnresearchtrust.org/node/212
[has reference information to dozens of studies]

LDN and HIV / AIDS
http://www.ldnresearchtrust.org/node/210
[has info on several studies, including two from Mali, Africa: "Effectiveness Study Low-Dose Naltrexone Versus ARV's for HIV+." (Journal of AIDS and HIV Research, Oct 2011)]

A longer list of clinical trials for LDN (though not updated since May 2013, and may contain some duplicates of the examples posted above)
http://www.lowdosenaltrexone.org/ldn_trials.htm