In India, a large number of people believe in black magic.

Black magic is the belief of practices of magic that draws on assumed malevolent powers.This type of magic is invoked when wishing to kill, steal, injure, cause misfortune or destruction, or for personal gain without regard to harmful consequences.
-wikipedia

I have personally seen people speak of this thing and how it has spoiled their health/business etc.

In India , there are even products that claims to protect one from black magic.

"Black magic" is a really large umbrella for a wide range of claims, but the very definition of any "magic" is that it is somehow supernatural. Naturally (!), no compelling evidence has ever been put forth for any supernatural phenomenon. Once a phenomenon is observable, reproducible, and testable, and shown to exist, it may turn out to violate our current understanding of the natural laws, but if the phenomenon is for real, we shall have to adjust our views to accommodate this, and the phenomenon shall cease to be considered supernatural. "Magic" will never be shown to exist.

More specifically, in regions of India there is a somewhat widespread belief in tantra. While few practitioners would lend themselves to scientific studies for reasons explained above, there has been one notable appearance where Indias allegedly most powerful tantrik was challenged in live TV in front of an audience of millions of people, to kill a person with the aid of black magic alone. 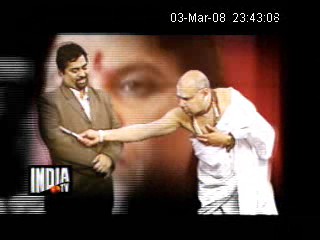 Tantra power had miserably failed. Tantriks are creating such a scaring atmosphere that even people, who know that black magic has no base, can just break down out of fear, commented a scientist during the program. It needs enormous courage and confidence to challenge them by actually putting one’s life at risk, he said. By doing so, Sanal Edamaruku has broken the spell, and has taken away much of the fear of those who witnessed his triumph.

A lot of it is psychology. It's like the statement that the effect of Voodoo only works if you believe in voodoo.

A lot of indians believe in things like the Evil Eye (going so far as to putting fake moles on their babies to Ugly Things Up). A lot of indians are superstitious, from Believing in witches and black magic, to the insane practices of palmistry and horoscopes in everything from business decisions to naming their children to even deciding potential brides/husbands for their children.

The fact is that people who believe in something only see it when it succeeds and not when it fails. There are countless people whose lives are ruined by following these practices but people will only care about those who succeed thus perpetrating the myth that these practices do work.

And many of these practices work for other reasons. People in India say that Western or "love" marriages often end in divorce while their horoscope backed marriage does not. They fail to place into account that most marriages in the west are between two equals while in India women are expected to be subservient and divorce is still heavily stigmatised so couples stay together despite horrific treatments. Some of these ideas work but not due to the reasons people think they do.

There is no evidence that any superatural claims have any sort of validity. This includes all forms of magic. Reference: http://www.randi.org/site/index.php/1m-challenge.html

Not the answer you're looking for? Browse other questions tagged psychology india .

28
Do short pictures as subliminal messages work?
22
Can memory tricks work?
32
How does deja vu work?
531
Does torture work well as an interrogation technique?
17
Does "reverse psychology" work?
29
Do performance incentives work for knowledge workers?
10
Does suggestive selling work in small retail?
16
Does auto-suggestion work?
2
Does India finance terrorists in Pakistan?