Is mathematical modelling of investment markets a "science"? [closed]

A relative of mine works for a big bank (of bailout fame) in the investment division. We had a discussion where he claimed that what he does is actually a science. Me being an engineer called baloney on this. IMHO there is no science that can predict the future without a decent mathematical model, and I think the world of investing lacks said models.

Some of the arguments he presented have to do with the sophisticated software models that are used for automated trading. The argument I presented is that all models are wrong (see 2008) and they are just delusional in their science.

To settle this, I need to know if there is any falsifiable and repeatable propositions that form the basis of the science for big time, multi-billion dollar bank investing.

Update: I found an older article here with mathematical modeling for macroeconomics for the Bank of New Zealand, and it shows (below) the forecast (wide gray areas) nowhere near the actual data (dashed lines). 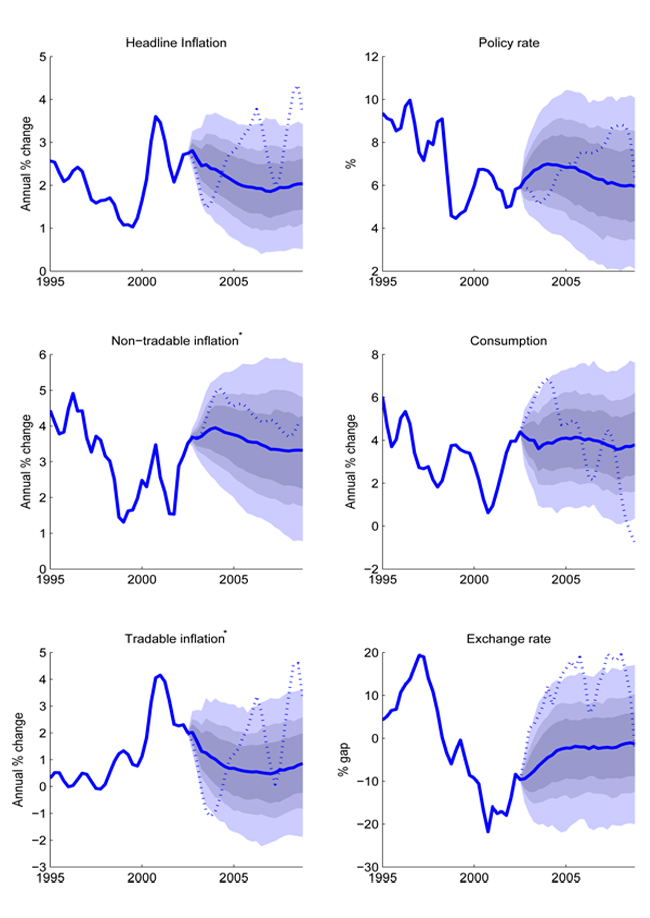 A famous example of the efficacy (and also problems inherent in) mathematical modeling is the concept of Dynamic Hedging ← a transcript of an excellent documentary on the subject. The model was created by Black and Scholes, for which they were awarded the Nobel prize in Economics. Under certain reasonable assumptions, their model is guaranteed to reduce risk in proportion to the amount of investment one has made (which seems a bit counter-intuitive at first). The best analogy up with which I can come is that Dynamic Hedging is a lot like opening a casino. The model ensures that the odds will always be in the house's favor, so in the long run you will, in expectation, make a profit. The problem is that every once in a while someone will likely "win big", and your casino will have to make a payout to them. That's fine, as long as you have enough liquid money to make that payout; you'll eventually recoup the loss in the long run. The problem is that, unlike a casino, the instantaneous risks of the market are unbounded. For example, there is unbounded risk associated with shorting a stock. Therefore, as long as you have an unlimited supply of liquid cash (or credit) to deliver those payouts along the way, you are guaranteed to at least break even. Black and Scholes' model was implemented in the form of a number of hedge funds, most notably Long-Term Capital Management, which enjoyed spectacularly consistent returns in the 40% range throughout the 1980s and most of the 1990s. The problem (I'm greatly simplifying things here) was that eventually the fund got so big that it was no longer able to borrow/acquire enough liquid capital to sustain itself.

So what's happening these days? The financial concepts of arbitrage and hedging are theoretically guaranteed to be risk-free. The idea is quite simple:

That's why we currently see the "big banks" investing millions (and some speculate billions) of dollars into high-tech computer centers very close to the big stock exchanges. (Sorry, that video is in Nederlands, but a lot of it is just dubbed English, and many Dutch words are mutually intelligible with English.) Since almost all trading is done electronically these days, the quicker one can get information from and make trades on the markets, the greater chance one has at exploiting arbitrage. In practice, though, stochasticity of the market does induce risk, which has led to widespread use of statistical arbitrage.

I feel I should elaborate on the "science" vs. "art" component of this question, and why I brought up the question of their differentiation in the original set of comments. In my mind, the classifications of science and art are not mutually exclusive. The primary defining characteristic of science is a method by which predictions about a previously mysterious process can be made. Art is the display, application, or expression of a method, almost always with the intention of affecting others' emotions or intellect. By these definitions, science and art are not mutually exclusive, e.g., I believe one could make an argument that cooking is both a science and an art.

Anyway, without getting sidetracked too much, I also want to mention models. I think Newtonian mechanics and Newton's law of universal gravitation are great examples. Newton's models for the way the universe works are extremely good at "predicting the future", at least on the scale of ordinary interactions here on Earth. Unfortunately, Newton's models break down if we change the scale. For example, if we look at a planetary scale, they don't accurately predict the perihelion of Mercury; it wasn't until the turn of the 20th century that models were created that could both accurately predict mechanics on the scale of humans and also mechanics on the scale of planets (most notably Einstein's general relativity). Given that we know there are phenomena in the universe that Newton's model is incapable of predicting, does that mean Newton's model isn't science or is "delusional in [its] science"? Of course not. In fact, we still use Newton's model for many tasks (e.g., engineering) down on the human scale, because it's a lot easier to use than the more robust models.

(I apologize for all of the Wikipedia references; I just think they're a good way to get a high-level understanding of some of these concepts.)

The argument I presented is that all models are wrong (see 2008) and they are just delusional in their science.

Is medicine a science? Medicine has test tubes, and statistics, and machines with blinky lights. And, models: trials, hypotheses, etc. So it looks like a science.

But sometimes people die. Unexpectedly. Does that mean that "all models are wrong", to quote your argument?

Similarly I think that investing is a science, with various caveats which apply to medicine too, for example:

There a two questions mixed in together here.

The first is whether the mathematical modelling they do is a science. That question can't be answered until we have an agreed definition of science (or at least an approximate one).

The second is whether the modelling is successful.

Yes, it is moderately successful. Not all of it is perfect - some people may have private models that are plain wrong. Even the higher-quality models may not be perfect, and have limitations.

The goal, though, is not to be always right, but to be right often enough to make a living.

Note: In the example fan-chart given, the blue lines do not represent all of the possibilities, but just the 95% confidence range (or 99% confidence range or the 99.997 confidence range - alas the reference did not define it.) Coming up with one example of it being outside this range counts as anecdote in a world where risk is an intrinsic part of life.

(No references, because this is all my basic understanding from working in a related field of mathematical modelling, where being right 55% of the time would be very profitable.)

I don't know if you would regard this as 'science' or 'art' but there are definitely mathematical models for stockprizes and investing. The theory of stochastic differential equations and stochastic processes deal with modeling these kinds of situations. See here and here, for example

Actually, yes, this is a science. Since it's not about what we feel mathematics to be (a science or an artform) but it's about how these models are used to describe real life phenomenon. Any selfrespecting mathematicians will use scientific rigor in applying these models (fitting a model to real life data, reformulating a theory if there seems to be a difference between real life and the model describing it, etcetera). So it's definitely a science.

Economics can not be a science because the study itself effects the markets they're studying. Expectations can be self-validating, therefore removing independence between observer and subject that is necessary to be considered a science. George Soros figured it out decades ago but, because it negates economics all together, it never really caught on. The concept is called reflexivity and it demotes economics to a fancy ouija board.

Not the answer you're looking for? Browse other questions tagged finance .