Can the Rape-aXe only be removed by a doctor?

The Rape-aXe was a prototype of a female condom designed to attach itself to an attacker's penis with barbs if an attacker attempts to penetrate the woman wearing the Rape-aXe.

The barbed shafts can only safely be removed by a surgeon. The offender will cause serious and possibly permanent damage, should he try to remove Rape-aXe himself.

Because of this, they claim that the Rape-aXe aids in prosecuting the attacker, since the rapist will have to go to a hospital to get it removed, and the device tags him as a rapist.

Not being one to trust the marketing hype of a security product, I want to know: is this claim true? Is there special medical knowledge or tools involved in removing the Rape-aXe, or are we likely to see instructions for a build-your-own removal kit using commonly available tools and requiring minimal know-how to actually remove a Rape-aXe?

The only evidence for the claim that the device must be removed by a medical professional comes from the device creator, on the website of the product.

It seems like an important point, since the idea is that in having to have such a device removed the authorities would be alerted and the rapist caught.

Testing how hard the device is to remove isn't something that has had a lot of time dedicated to it yet, perhaps in no small part due to a lack of volunteer test subjects.

As to whether or not the device needs to be removed by a medical professional?

Quoting from the Rape Axe FAQ:

Will there be a lot of blood?

No, the penis is encapsulated and the barbs penetrate skin deep only.

I also captured this frame from the animation showing how the device works: 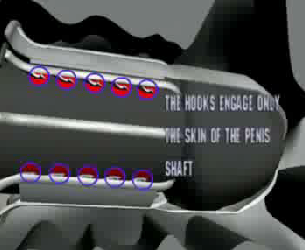 The hooks don't penetrate very deeply into the skin, although will dig deeper if attempting to forcibly remove the device.

Given that the device is latex, the device could be cut into sections, which would allow sections to be removed, reducing overall pressure which would otherwise force other hooks in more deeply.

Assistance would still be needed to remove the device, although given that the device does not penetrate below skin level I would not think a surgeon is specifically required.

The claim about needing a surgeon and potential permanent damage seems like advertising and nothing more. It seems likely that the device could be removed without a surgeon or even by someone without a lot of medical training.

In the worst case scenario, the device can probably be forcibly removed without permanent damage. The website gives no reference to explain how permanent damage could come about and given how the device works it seems unlikely. Given a few weeks/months of healing or years of jailtime, removing the device forcibly is probably going to be a pretty common approach.

It should be noted that the device has attracted a lot of criticism:

Rape is a serious problem that still requires a lot of work to try and eliminate, and to support the victims. The consensus seem to be that devices in the vein of the Rape-Axe cause more problems than they solves.

As to the title question, can the device only be removed by a doctor? It's hard to say without a more thorough investigation, although I've found nothing that would indicate only a doctor or surgeon would be able to remove the device.

Not the answer you're looking for? Browse other questions tagged medical-science marketing sexual-abuse security .

33
Does an "apple a day keep the doctor away"?
25
Have one in ten women suffered rape in the UK?
12
Are members of organized rape gangs in the UK mostly of Kashmir / Pakistani origin?
20
Are annual female rape and male "made to penetrate" rates similar in the US?
23
Do 87% of female rape victims experience an orgasm during the attack?
21
Do only 0.6% of rapes lead to incarceration in the US?
10
Do 90% of rape cases in the UK go unreported?
12
Is one in five women the victim of rape/sexual assault?