Are there more women in government in Afghanistan than America? [duplicate]

Ask Question
Asked 5 years ago
Active 5 years ago
Viewed 7k times
41
This question already has an answer here:
Is the U.S. 90th in the world in terms of women in national legislatures? (1 answer)
Closed 5 years ago.

I'm skeptical of this claim: 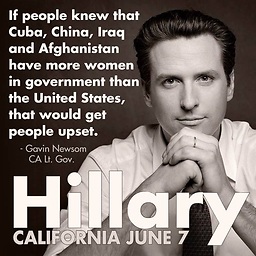 united-states politics afghanistan
Share
Improve this question
edited May 31 '16 at 19:36

On the basis of relating the claim to proportion of seats held by women in national parliaments (%) as a part of elected governments referring to World Bank Inter-Parliamentary Union data, the answer would be yes.

United States has lesser percentage of proportion of seats held by women in national parliaments than the other countries per numbers mentioned below.

Since the validity of the claim has already been expertly addressed, I'll answer the second part:

Yes, apparently in the 2011 documentary Miss Representation. I can't find a direct source for the quote in the film itself and I haven't seen it, but I did find the book What Will It Take to Make A Woman President? by Marianne Schnall on Google Books.

One of the chapters is an interview with Gavin Newsom, and on pages 158-169:

MS: I remember in Miss Representation, you said this line and it was shocking to hear: "If more people knew that Cuba, China, Iraq, and Afghanistan have more women in government than the United States of America, that would get some people upset."

Note that the wording is slightly different than the image in the original post, so presumably it or Schnall slightly misquoted Newsom.

Not the answer you're looking for? Browse other questions tagged united-states politics afghanistan .

21
Is the U.S. 90th in the world in terms of women in national legislatures?

10
Are political leaders from Latin America unusually prone to cancer?
35
Are there more people with genius IQs living in China than there are people total in the U.S.?
17
Are there more guns in America than people?
24
Have more US veterans taken their own life in the last six years than died in Iraq and Afghanistan?
19
Is sexual assualt considered a pre-existing condition in the new US Health Care plan?
8
Is Afghanistan no more dangerous (for the population) than Brazil?
11
Did House Minority Leader Nancy Pelosi say that she hopes banning bump stocks is a slippery slope for more gun restrictions?
4
Are there more trees in America today than there were during colonial times?