Is Google using ReCaptcha as a free source of human-intelligent labour?

Having worked at the Amazon Mechanical Turk for a long time, I find that some ReCaptcha questions are very similar to the 1c tasks there. Identify this, identify that.

A search shows that several web authors share the same suspicion. Most of them are high in the tinfoil scale, so they are not that reliable of a source. Included below for notability purposes.

Given that Google is not a charity, and that recaptcha is free, the claim might hold water.

What is Google getting out of ReCaptcha? Free labour? Big data behavioural analysis? Something else?

technology google
Share
Improve this question
asked May 30 '16 at 13:14

Yes, and ReCaptcha have always been open about it, before and after being acquired by Google.

From its formation, one of ReCaptcha's main selling points was that the data would be used. At first, it was used for fixing errors and ambiguities in the digitisation of books. Here's an example of this being praised back in 2007, 2 years before Google acquired it, when ReCaptcha was new:

reCaptcha makes captchas more useful than just preventing spam; by tapping into the reportedly 150.000 hours spent daily typing in captchas, reCaptcha has users proofread book text that OCR could not recognize and which would otherwise have to farmed out to a Mechanical Turk or other distributed proofreader. ...reCaptcha’s ingeniousness lies in making an otherwise cumbersome task worthwhile

Today (2016), it's expanded to include improving maps, machine learning/AI, and possibly other uses. Google are open about this, and even have a gallery of examples of how recaptcha data is used: https://www.google.com/recaptcha/intro/index.html#creation-of-value

Google were also open about this back when they first acquired it. In fact, at the time, not only did their slogan reference how the data was used, but the tool itself also explicitly stated it:

The words above come from scanned books. By typing them, you help to digitize old texts. 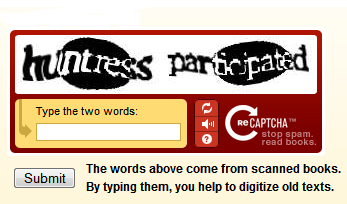 Screenshot from this blog

They promoted the product as a form of "crowdsourcing", using labour people were giving freely anyway on existing captcha systems to do something useful. For example, from the official blog post by Google from 2009 announcing the acquisition:

Since computers have trouble reading squiggly words like these, CAPTCHAs are designed to allow humans in but prevent malicious programs from scalping tickets or obtain millions of email accounts for spamming. But there’s a twist — the words in many of the CAPTCHAs provided by reCAPTCHA come from scanned archival newspapers and old books. Computers find it hard to recognize these words because the ink and paper have degraded over time, but by typing them in as a CAPTCHA, crowds teach computers to read the scanned text.

Whether or not that's efficiency or exploitation, smart or immoral, is subjective - but there's never been any doubt or secrecy about the fact it happens.

[edit] of course, with some of the challenges coming from "text" software had failed to identify, there's always the possibility it might be unreasonably difficult or not even text at all. With thanks to Mateo's comment:

Luis von Ahn, one of original developers, talked in one TEDx conference about reCAPTCHA technology, and his new Project DuoLingo

In this presentation, he talks about CAPTCHA history and problems and how people were wasting about 500,000 hours every day using CAPTCHA. Then he thought how use this time in a useful thing, like helping OCR books.

He wants use this idea about massive collaboration on Duolingo, a Language-Learning Platform. The idea is to translate texts to more languages than English.

Not the answer you're looking for? Browse other questions tagged technology google .