In the context of Barack Obama's 2016 visit to Japan, this image was made. 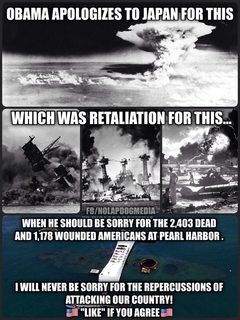 Obama apologizes to Japan for this

which was retaliation for this...

Did he apologize for the bombing? If not, did he do something that might be reasonably interpreted as apologizing?

He laid a wreath, mourned the dead, spoke about a moral duty to prevent the horrors of war, but didn't apologise, didn't separate the nuclear attacks from the other horrors of war, and didn't express any view on whether the use of nuclear weapons at that moment in history was right or wrong.

Mr Obama said the memory of 6 August 1945 must never fade, but did not apologise for the US attack

In an interview before the speech, he made it clear he wasn't going to apologise:

Barack Obama said on Sunday his visit to Hiroshima, the first city to suffer an atomic bombing, would emphasize friendly ties between former enemies. But the US president reiterated he would not apologize for the devastating attack.

...“It’s important to recognize that in the midst of war, leaders make all kinds of decisions, it’s a job of historians to ask questions and examine them,” Obama said.

Snopes have looked into the claim that he apologised, and found it to be false.

The Atlantic have published an analysis piece around why it is common in diplomacy to stop short of an apology like this, and why the line is drawn where it is.

When Barack Obama goes to Hiroshima.., he will not apologize on behalf of his country for carrying out that strike 71 years ago. He will neither question the decision to drop bombs on two Japanese cities, nor dwell on its results: the deaths of more than 200,000 people and the dawn of the atomic age. But he will affirm America’s “moral responsibility,” as the only nation to have used nuclear weapons, to prevent their future use. He will recognize the painful past, but he won’t revisit it. When it’s all over, we still won’t know whether or not he thinks there’s something about the atomic bombings to be sorry for.

But why is expressing remorse such a big deal in the first place? ...When I put this question to Jennifer Lind, a professor of government at Dartmouth College who has studied these issues extensively, she gave me a one-word answer: “politics.” [analysis continues]

Here's the official transcript, and the NY Times also published the full transcript of Obama's speech. It doesn't contain an apology, but is reconciliatory. For example, he does:

If not, did he do something that might be reasonably interpreted as apologizing?

From Obama’s origami cranes he left behind touches many hearts, the brother of Sadako Sasaki, who died of leukemia most likely caused by the atomic bombing of Hiroshima, interpreted Obama's hand-crafted origami cranes given to the Hiroshima Peace Museum as an apology.

Sasaki’s 74-year-old brother, Masahiro, said on May 28 he was deeply moved by the president taking an interest in his sister’s origami cranes.

“I took his gesture as his apology, strong determination to restore peace and warm, generous heart,” he said.

Hiroshima survivors: Obama speech moving, 'more than enough' surveys ordinary Hiroshima residents who lived through or were born soon after the atomic bombing. One of them said that it was an apology, while another implicitly said it was not an apology by saying that a US apology can't happen until Japan apologises for Pearl Harbor:

"I think (Obama's speech) was an apology."

Hattori's parents and grandparents, who sold rice near where the bomb fell, all either died that day or in the years that followed. Hattori, who now has three types of cancer, earlier said that an Obama apology would ease his suffering.

"I feel different now. I didn't think he'd go that far and say so much. I feel I've been saved somewhat. For me, it was more than enough."

"A sitting U.S. president visiting Hiroshima is just the first step. We're still 10 years from the possibility of a president issuing an apology."

Born two years after the bomb was dropped, Ishida remembers growing up with bomb survivors whose skin was scarred.

"Japan has to apologize for Pearl Harbor, too, if we're going to say the U.S. must apologize ... That's not possible, given the countries' current situations. In America, people say the war ended early because they dropped the atomic bomb. If a president apologized for this, it would raise hell in the U.S.

"We can't tell North Korea not to have nukes when the U.S. has them, but the U.S. developed them first ... It's not possible to get rid of nuclear weapons when they're being used as deterrence."

The blog post Obama’s visit to Hiroshima is viewed as “a sort of” apology by the people of Japan. surveyed Japanese people, and concluded that it a large proportion regard the visit as some sort of apology:

To study this, we performed a series of surveys on a nation-wide Japanese sample of about 1,000 people, and on a similar number of people currently living in Hiroshima. We asked if they support the visit itself, if they see sincerity in the visit, and if they see the visit as a sort of apology (even though the White House denies it).

On the question which asks whether they consider the visit to be “a sort of apology,” their answer is “Yes”. We believe this is the most important finding of the survey: that the visit is considered as a “non-apology apology” in both Hiroshima and national samples even though the White House states that President Obama will not revisit the decision to use the atomic bomb and there is no intention to make an apology. For the national sample, 77.3 per cent see Obama’s visit as a sort of apology, and for Hiroshima, the number is 85.6 percent. As Figure 1 shows, the national and Hiroshima samples are statistically different – more people in Hiroshima see it as an implicit apology than the national average.

12
Did Bill Ayers ghost-write for Obama?
20
Did Obama have a marine demoted for correcting him?
6
For the same size, is real estate cheaper in Australia than Japan?
7
Can the UK fire its nuclear weapons without US agreement?
5
Did Taro Aso say that Japan should emulate the Nazis in amending the constitution?
45
Did Obama say the USA is "no longer a Christian Nation"?
200
Does the President of the United States have the ability to deploy nuclear weapons at will?
9
Did Obama call for online "truthiness tests" to "curate" news on the internet?
17
Did the Obama Administration only complain about Russian hacking after the election?