Was a mirage involved in the Titanic's sinking?

I watched a documentary, Titanic's Final Mystery. It premise is summarised by this Smithsonian Magazine article.

An unusual optical phenomenon explains why the Titanic struck an iceberg and received no assistance from a nearby ship, according to new research by British historian Tim Maltin. Atmospheric conditions in the area that night were ripe for super refraction, Maltin found. This extraordinary bending of light causes miraging, which, he discovered, was recorded by several ships in the area. He says it also prevented the Titanic’s lookouts from seeing the iceberg in time and the freighter Californian from identifying the ocean liner and communicating with it. A 1992 British government investigation suggested that super refraction may have played a role in the disaster, but that possibility went unexplored until Maltin mined weather records, survivors’ testimony and long-forgotten ships’ logs. His findings—presented in his new book, A Very Deceiving Night, and the documentary film Titanic’s Final Mystery, premiering on the Smithsonian Channel at 8 p.m. on April 15—are distilled here [...]

It's quite plausible. The 'fog' which surrounded the iceberg may have been a mirage caused by super-refraction.

The British Government's 1992 MAIB report posits the presence of super-refraction as a possible explanation for why CALIFORNIAN could see TITANIC even though the two ships appear to have been beyond each other's horizons (and TITANIC could not see CALIFORNIAN):

The second explanation, which was first advanced some years ago in an unpublished document, is that CALIFORNIAN did actually see TITANIC but at a very much greater range than her horizon because of abnormal ("super-") refraction. A note on super-refraction is included at Annex 4. In favour of this theory, the phenomenon is variable in its effect and this might explain the apparent movement of each ship as seen by the other when both were in fact stopped. In addition, the rockets seen by CALIFORNIAN were described as low-lying (quoted as rising to less than mast-head height) and this could be because they actually rose to a height above the refracting layer and were seen directly. Against the theory, it requires a long period during which CALIFORNIAN could see TITANIC but not vice versa. This is not impossible: the phenomenon does lead to curious results, and further it is possible that CALIFORNIAN'S lights (though they were electric and could certainly be seen on a night such as this at 5 miles or more range) could not be seen even with superrefraction at 17 to 20 miles.

There are two further objections to the super-refraction theory both of which are, equally, objections to the general theory that TITANIC was seen. The first is that, although when he first saw the other ship Captain Lord recalls seeing a green (starboard) sidelight as one would expect with a ship to the south and approaching on a westerly course, later her red (port) light came into view, arguing that after stopping she swung markedly to starboard. Evidence of TITANIC'S change of heading after collision is not absolutely conclusive, but it is known that initially she went to port and the balance of evidence seems to be that afterwards her heading did not much change. Her port sidelight would therefore not be seen. The second is that Mr Stone, CALIFORNIAN'S officer on watch from midnight till 0400 hrs, noticed a change of bearing before the other ship disappeared. I do not place great weight on this, for Mr Stone had no particular reason to take accurate compass bearings of the other ship, and the explanation may have been that his own ship was swinging, leading to a change in relative bearing; but clearly if the compass bearing did change appreciably the vessel cannot have been TITANIC for she remained stopped; superrefraction could not explain a substantial change in bearing.

In sum, I do not consider that a definite answer to the question 'was TITANIC seen' can be given; but if she was, then it was only because of the phenomenon of superrefraction for she was well beyond the ordinary visible horizon. More probably, in my view, the ship seen by CALIFORNIAN was another, unidentified, vessel. Whether the ship seen during the later stages of the tragedy by TITANIC was this third ship, becoming visible to her and then disappearing as she sought a break in the ice field, or a fourth vessel is a matter of speculation outside the scope of this reappraisal.

The report also includes a summary of the phenomenon of super-refraction (which looks to have been photo-copied from a textbook or encyclopaedia):

Super-refraction increases both the optical and radar horizons, so that it is possible to see and to detect by radar objects which are actually beyond the geometrical horizon

I've also taken a look at another, more detailed, source of the same claim (i.e the claim is being made by the same person but reported by a different media outlet):

Weatherwise - Titanic's Mirage: A New Perspective on One of History's Greatest Mysteries

Here "Waldemar Lehn, professor emeritus at the University of Manitoba and an expert in atmospheric refraction and mirages" explains how he believes super-refraction could have prevented the lookouts from seeing the iceberg:

"…a strong superior mirage can create “dead zones” in the field of view, in which objects are vertically compressed so strongly that they would escape perception. In one atmospheric simulation, an iceberg up to 20 meters high would be practically invisible at a distance of 9 to 10 km. A 10 meter berg would become apparent only at about 7 km. Thus the “cloaking” of an iceberg is a real possibility, until it gets relatively close."

The article also talks about:

... fog or haze ... superior mirages, where the distant sea and ice is loomed above the normal apparent horizon, creating a new apparent higher horizon, known as a false horizon. The band between the normal horizon and the false apparent horizon above it is known as the miraging strip, or “duct.” This band always appears hazy, due to the scattering of light in the extraordinarily long air path visible in the duct. This phenomenon is known as a fata brumosa (“fairy fog”), and is often described as a haze or fog. Dr. Young explains: “The superior mirage is often associated with an appearance of ‘fog’ at the horizon, because one sees much farther than usual in the mirage strip below the false horizon.” [emphasis mine]

What effect does super-refraction have?

In relation to the iceberg:

In relation to Californian:

Well, it was night-time, so it probably mostly looked dark. Here's a description of how the phenomenon can look in daylight:

Hafgerdingar is Norse for ‘sea hedges’ or ‘sea fences’. The term denotes a circular *physical illusion depicting a giant wave similar to those occasionally reported in Polar sea regions. The term hafgerdingar stems from a 13th-century manuscript called the King’s Mirror, which contains descriptions of Iceland, Ireland, and Greenland. ... the phenomenon in question may well have been a *superior mirage or *fata morgana. In the Polar region such physical illusions can appear to the observer as a huge wall of waves surrounding one’s ship, with an apparent height of 30 m or more.

A Dictionary of Hallucinations: H: Hafgerdingar

Here's an image showing how a superior mirage can compromise the view of other objects (note that the lower half of the ship is not visible - the upper half appears to be floating): 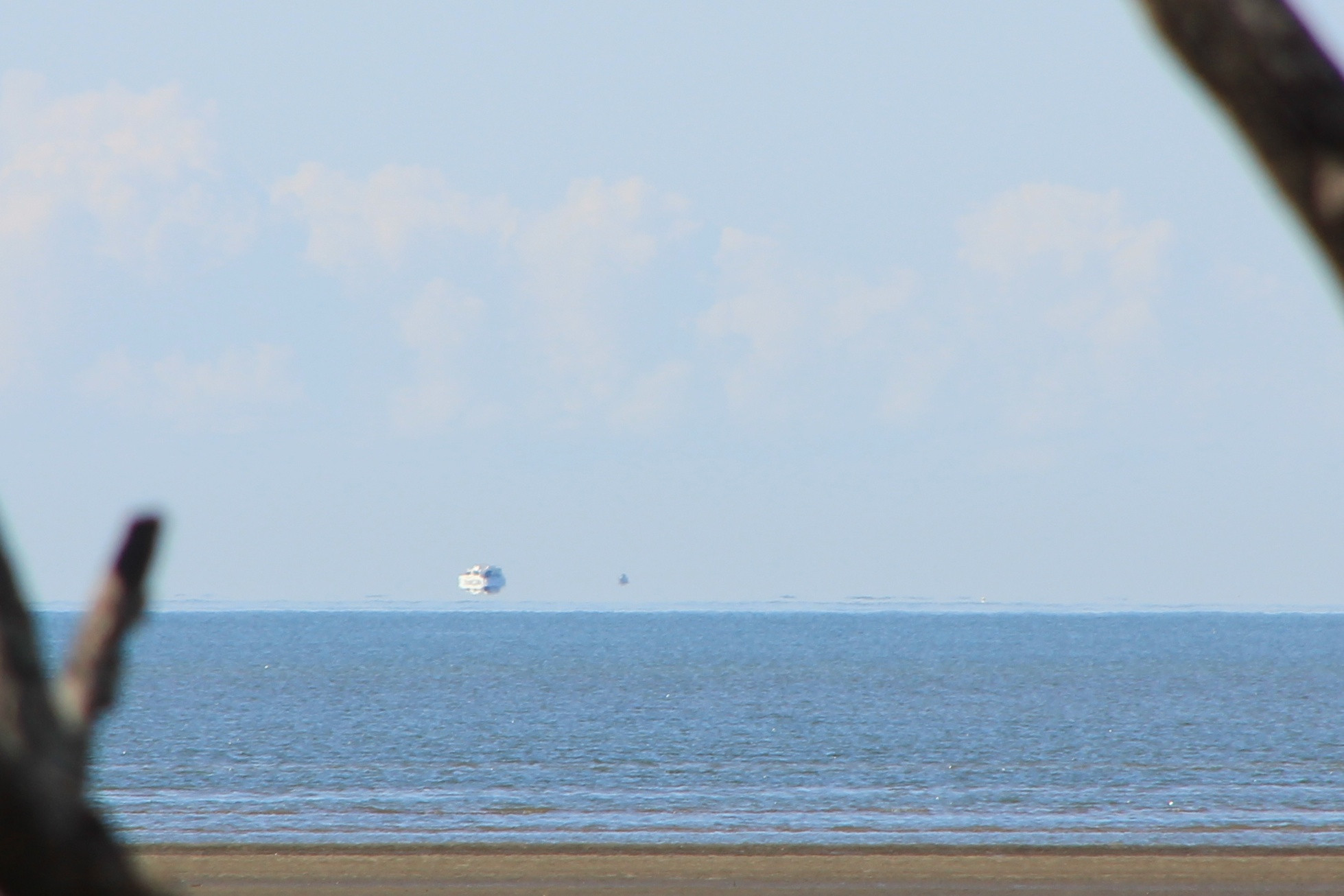 For more great mirage pictures see Mirages In Finland and Pekka Parviainen's website polarimage.fi. This particular type of mirage is also known as the 'Fata Morgana' - it's been captured on video and can be seen on Youtube. Nick Neynens's blog has some fantastic photos showing how icebergs can look during a superior mirage.

Not the answer you're looking for? Browse other questions tagged history optical-illusions titanic .

8
Did the moon's tidal effect sink the Titanic?

15
Was McCarthy directly involved with the House Un-American Activities Committee (HUAC)?
15
Were any women involved in the 2008 financial crisis?
48
Was the Titanic ever publicised as “Unsinkable”?
31
Was Columbus involved in sexual slavery?
4
Was SS Californian intended to be a rescue vehicle for the passengers of a deliberately-sunk Titanic?
11
Did passengers of the Titanic predict/foreshadow its sinking?
11
Did the chief baker of the Titanic survive two hours in ice-cold water?
9
Were slaves involved in the building of the Pyramids of Giza?