This particular quote is often attributed to different people including Hitler and Goebbels. Being USSR-born I've heard many Lenin quotes about information and propaganda, but not this one, still it seems to be popular attribution in the West. 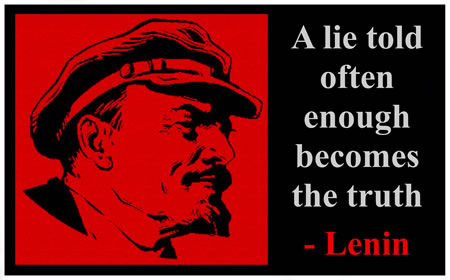 14
Did Roger Ailes say "the truth is whatever people will believe" or something substantially similar?
20
Did René Descartes say “People would get rid of half of their problems if they could agree on the meaning of words”?
29
Did Lenin say this about guns?
7
When asked, "How much is enough?", did John D. Rockefeller say, "One more dollar"?
17
Is "If you have nothing to hide, you have nothing to fear" a line used by Joseph Goebbels?
4
Did Morgan Freeman say "Oppression is being told you can't say certain words because you will offend someone else"?
6
Did Lenin ever say that you could "destroy society through music"?
16
Did Lenin say "destroy the family, you destroy the country", and if so in what context?
40
Did Einstein say this quote about blind belief in authority being the "greatest enemy of the truth"?
10
Did Josef Mengele say: "The more we do to you, the less you seem to believe we are doing it"?