"One year without beef saves 3432 trees" 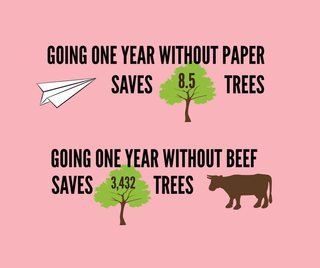 Alas, as with so many of these 'claims' on FB, actual data is missing.
And in this case, the lack of units does not help either. How can you compare paper with beef? What is 'saving a tree'?

My guess is that the underlying statement is 3432 trees are felled for one year of beef consumption. I don't dispute that eating meat has a large environmental impact, but can anyone explain this number (and prove my assumption - because alternatives are possible*)?

This Reddit thread has no answers (with numbers) yet.

* For instance, it could be a comparison life cycle analysis where everything is reduced to CO2 emissions

The cartoon seems to originate from Resources Spent on Consumption of Animals (citing to a video from Bite Size Vegan) which gives slightly more detail:

So the assumption is that cattle are grazing upon land that would be forested without human intervention.

The most obvious problem with this analysis is that there are much fewer than 45 trees per 55 square feet.

According to Tufts University Office of Sustainability:

Tree density varies, and we used an average of 700 trees per acre (this number was taken from DOE’s "Sector-Specific Issues and Reporting Methodologies Supporting the General Guidelines for the Voluntary Reporting of Greenhouse Gases under Sections 1605(b) of the Energy Policy Act of 1992")

(Even 700 trees per acre is a very high estimate. See the recent Nature article Mapping tree density at a global scale, Fig. 3, that shows that depending upon the type of ecosystem tree density varies from 200 to 1000 per hectare, or 80 to 400 per acre)

So even assuming that all cattle graze on land which was previously forested (rather than the Great Plains of North America which were naturally grasslands with millions of bison), the cartoon is off by a huge factor on the number of trees per acre (trees per pound of beef).

The next major problem with the cartoon (as PhillS is commenting) is more subtle, but also very severe. The time for trees to grow to make paper is 25-40 years. So, when comparing to using trees for paper, it doesn't make sense to count the acreage (square footage) as if 700 trees could grow on one acre in one year.

Furthermore, according to the Nature article cited above, globally there is a:

gross loss of approximately 15.3 billion trees on an annual basis

The claim really originates from 1986, and over the years has been stripped down to a factoid, to fulfill Bradbury's prophecy "Films and radios, magazines, books leveled down to a sort of pastepudding norm".

It started from the editorial Our steak in the jungle BioScience (November, 1986), page 642 on the effect of Central American beef production on tropical forests, and is quoted and referenced in many subsequent documents.

Quoting from the editorial:

But what would the consumption of a typical four-ounce hamburger represent in terms of pounds or square feet of tropical forest? A well-developed acre of Central American rain forest has about 800,000 pounds of plants and animals. After forest removal and pasture establishment, the cattle will gain about 50 pounds per acre per year, or 400 pounds during the eight-year lifetime of a typical pasture. Because about half the animal is composed of skin, bones, and other nonfood portions, the total beef production is 200 pounds (800 four-ounce hamburgers). Dividing the 800,000 pounds of forest life per acre by 800, the number of hamburgers produced during the lifetime of a one-acre pasture reveals that we "lose" about half a ton of forest for every hamburger produced in Central American forest. Considering the tradeoff in terms of area (43,793 square feet per acre divided by 800 hamburgers) reveals that each Central American forest hamburger represents about 55 square feet of forest — roughly the size of a small kitchen.

What life might inhabit the 55 square feet of tropical forest represented by a single hamburger? Such a space could contain one vigorous tree, 60 feet tall and weighing about 875 pounds. Below the tree might be some 50 saplings and seedlings in some 20—30 different species (another 120 pounds). Living in the vegetation would be thousands of insects in more than a hundred species (as much as 2 pounds). Several of these insects would likely belong to species not yet known to science. Dozens of bird, reptile, and mammal species would regularly pass through and use this patch of forest (2 pounds). Finally, an almost unimaginable diversity and abundance of mosses, fungi, and microorganisms would be associated with leaf surfaces, bark, roots, and the soil (1 pound). All told, millions of individuals and thousands of species, inhabit that patch of tropical forest represented by a single hamburger.

So the area "55 square feet" appears in this article and it is said that one tree and "50 saplings and seedlings" might be in this area.

Much more recently, Emily Moran Barwick of "Bite Size Vegan" created a video the REALLY Inconvinent Truth. In the video and accompanying text, the same 55 square feet is used, but now applied to one pound of beef and it is stated that "45-55" trees are in this area. Quoting Emily's text:

the average us citizen eats 185 pounds of meat every year, and 62.4 pounds of beef...to produce 1 pound of beef, it takes approximately 55ft.² of rain forest, which depending on the area, is anywhere between 45 and 55 trees. so if you didn’t use any paper at all for an entire year, you’d be saving at most 8.51 trees. whereas if you avoid just 1 pound of beef, you’re saving 45 to 55 trees. now if you went an entire year without eating any beef, you’d be saving 3,432 trees.

Looking back at the 1986 article, if you consider trees from the moment of germination, 51 trees (1 mature tree plus 50 saplings and seedlings) are said to be in the area. However, the video specifically mentions 40 foot trees in arriving at the number for paper. Furthermore, according to Mapping tree density at a global scale Nature 525, 201–205 (10 September 2015), "almost all of the collected data sources...define a tree as a plant with woody stems larger than 10 cm diameter at breast height". So considering saplings and seeding when counting trees is not standard practice.

Emily takes 62.4 pounds of beef per US person per year and multiplies that by 55 trees, obtaining 3432 trees per year.

37
Does one acre of hemp yield as much paper as 4 acres of trees?