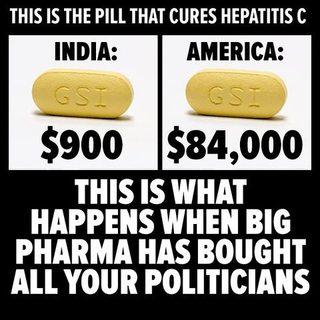 This is the pill that cures Hepatitis C

The image is incorrect in its description, but on target for costs being different in the USA and India, but jumps to hyperbole for its reasoning.

It is important to note that the pharmaceutical markets are wildly different in India and the USA. In the USA, it is legally mandated for people to carry some form of health insurance, and some insurances (not all) may cover some or all of the costs of the drug if they choose to include it. Thus the patient may never see the cost of the treatment themselves, only their intermediary in the form of a private insurance company or the state. In fact, for the drug in the question here, some states were able to negotiate the price down by 40%, and the cost presented to the consumer may be negligible depending on their plan. Europe has a similar system where governments negotiate the price, and a course of Sovaldi costs $55000 there. This marketplace of intermediaries and negotiation often leads to higher label prices in the USA and Europe, although the insured consumer may only pay a fraction of that.

In India, 80% of the population is without insurance, which means most consumers will need to pay for the treatment out of pocket, and thus a higher label price is not compatible to the marketplace for the company attempting to sell their product. India's Patent Act also contains verbiage that allows for licenses of drugs made by foreign companies to be revoked after three years in the marketplace, which keeps the price of foreign made drugs low in order to stave off the possibility of generic drug makers in India creating their own version of the drug three years after making it to market; while patents expire in the USA and Europe, such a quick revoking of a patent is atypical.

Not the answer you're looking for? Browse other questions tagged united-states medications india .