Singer Taio Cruz has a web page that lists his full name as follows:

In several other places, his birth name is listed differently:

What was Taio Cruz's birth name?

The Library of Congress confirms that this is the legal of Taio Cruz:

Furthermore, the catalogue of the german national library confirms that this is his birth name:

MuricBrainz, an open music encyclopedia that collects music metadata and makes it available to the public, listed his legal name too:

However, the controversy started when in September 2015, MusicBrainz received an unusual demand from anti-piracy company named Web Sheriff who seems to be representing Taio Cruz:

TorrentFreak gave insights on the demand :

Web Sheriff alleged in its demand that a news reporter had erroneously reported Cruz’s name as Adetayo Ayowale Onile Ere “some time ago” and the “error” had gained traction online.

Web Sheriff claimed that, that the issue is causing Taio Cruz “unnecessary anxiety”, therefore a “correction” would be appreciated.

Skeptical of the company's demand, Robert Kaye, MusicBrainz founder, requested proof of Cruz’s posted legal name to remove the name from his website, he told Web Sheriff that:

If you can provide us with some legal proof that the name is false, we’ll consider making this change.

Two weeks later, he received an alleged copy of a birth certificate said to belong to Cruz. Here is the image he posted on the blog: 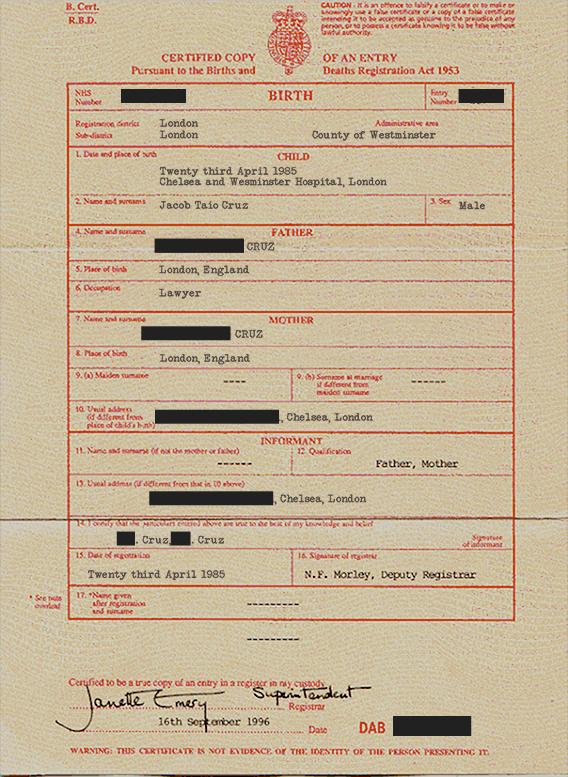 Kaye was not convinced of the authenticity of the document, almost proving that the document is forged, he noted on his blog that:

2. The hospital name is misspelled.

The date and place of birth is listed as:

However the hospital name is missing a “t”, it is spelled as Wesminster.

3. The hospital was founded after Cruz was born.

Cruz was born in 80s. However, Chelsea and Westminster Hospital was founded in 1993:

Chelsea and Westminster Hospital was built in just five years and opened in 1993, on the site once occupied by St Stephen's Hospital—bringing together staff, services and equipment from five London hospitals.

4. Lawyer does not indicate a profession in the UK

It seems that the word lawyer is not used to describe a profession in the United Kingdom. It is usually describes people who understand the law but not necessarily are real lawyers. According to BBC UK:

The word lawyer is a general term and can mean anyone who gives legal advice or believes himself learned in one or more areas of law. It is often used to describe solicitors, barristers, legal executives and others - more often than not it is used to describe the whole legal profession.

He was told by the UK government that they could not verify the authenticity of this certificate, but that he could request a copy of the certificate himself since birth certificates are public record.

Kaye paid the processing fees and requested a copy of the Cruz's birth certificate. However, it was not found. He reported:

On November 8th, I received mail from Her Majesty’s government informing me that no such birth certificate could be found and that my payment will soon be refunded.

This strongly suggests that the document provided to us by Web Sheriff was not a legitimate copy of a birth certificate for Jacob Taio Cruz.

Finally, there seems to be a match for a person named Adetayo Ayowale O A Onile-Ere on FamilySearch.org: 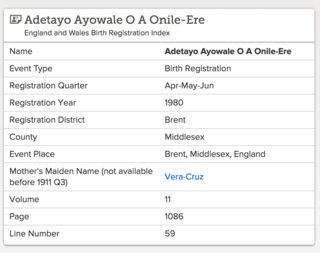 What is worth noting about this match is that Vera Cruz is listed as a mother for Adetayo Ayowale O A Onile-Ere.

Not the answer you're looking for? Browse other questions tagged united-kingdom celebrities .